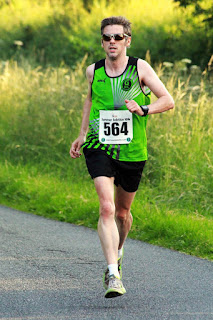 Grantham Running Club had four athletes in this twisty urban two lapper round the housing estates of North Peterborough. It is a technically demanding race with tight turns, underpasses and overbridges which prevent the runners getting into any sort of rhythm, all of which was compounded by the high winds. First home for the club was Matthew Kingston Lee who after a swift start found himself running alone and so eased up a bit to allow a group of runners to catch him and offer shelter from the wind. He went through halfway in 28:45, but slowed a little in the second half as the wind and recent injury problems took their toll eventually finishing seven seconds outside the prizes. After the race he commented that “Considering the conditions and lack of running miles under the belt I was fairly pleased with my second fastest ever ten mile race time.". Next home for GRC was Gav Meadows who had exactly the opposite problem with a lot of recent races and a heavy training block still in his legs, he was still delighted with his first performance at this distance. Making up the GRC contingent were injured pair Catherine Payne, who finished as 12th lady, and Robert McArdle, although both were well down on their best were pleased to complete some race miles as part of their rehabilitation. Full results below; 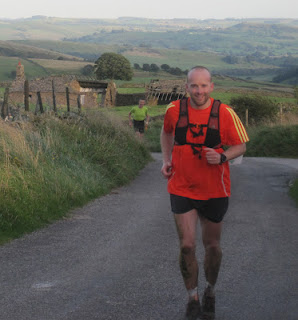 Grantham Running Club's Lucy Worthington entered her first 10 mile race last Sunday in Leicestershire. It was a perfect cloudy day for this event with minimal wind and the odd light spattering of rain to help her along the looped course on rural roads, up and down hill with a particularly challenging up the hill for the last mile! The run ended with a sprint finish across a playing field to the chip timing mats. The best thing about your first race over any distance is you are guaranteed a personal best and Lucy's time of 92:24 set her up for next month's Peterborough half marathon.
Bullock Smithy 56 mile Fell Race
Grantham's Paul Rushoworth tackled this 56 mile challenge in the Peak District for the 21st time having completed it on 17 occasions, The event is one of the toughest on the UK Ultra distance championships as it includes over 7,000' of ascent and decent across the Dark and White peak Districts. This year the race was about coping with the heat as well as finding your way and, of course, stamina. Paul's experience and recent hard schedule prepared him well and he picked up fourth place in ten hours thirty six minutes. Foe more information on what it is like to run these sort of distances why not read his blog? http://rushirushworth.blogspot.co.uk/ 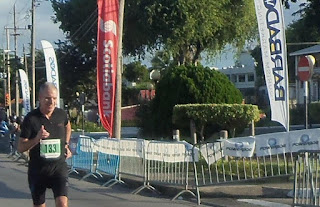 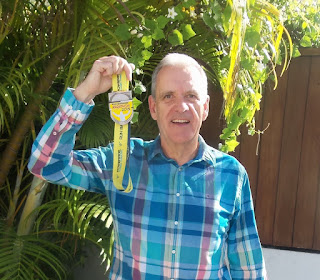 Grantham Running Club’s Neil Emerson flew out to Bridgetown Barbados to take part in their local running festival, taking into account both the temperature and the humidity Neil wisely opted for the half marathon not having done any hot weather running on his usual training routes round the Vale of Belvoir. The starting gun was fired at 05:00 to minimise the effect of the rising sun and the brief rain shower an hour later was certainly welcomed as they ran from the Bay Esplanade out of the city before dawn. The course was flat with a couple of sharp inclines to test the legs and would have been a lot easier had Neil not picked up a chest infection in the days leading up to the race. The upsides of the race was the friendliness of the locals and the superb organisation of the event, the only downside is that by going for the shorter distance Neil arrived back before the crowds arrived to cheer home those doing the full. (Pictures enclosed are Neil in the home straight and Neil with his medal) Neil is now training for his three 2016 marathons in Barcelona, Berlin and Prague. 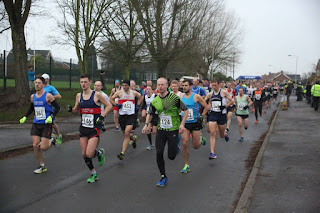 Although this Nottinghamshire based half marathon is the final big race of the year attracting well over a thousand entrants there wasn't an end of season feel to the event with the nine Grantham Running Club athletes all giving a good account of themselves on this hilly course as they all began the build up to their spring marathons in 2016. First home in GRC was Barcelona abound Gavin Meadows knocking an unbelievable 12 minutes off his time for this race 12 months previously and setting another new Personal Best in the process. He was closely followed by Andrew Pask also in 1:31 who has begun his preparations for the Rotterdam Marathon. Next home was Catherine Payne in 1:37 who finished third lady in her age category with Ultra runner Nick Payne a tantalising 9 seconds outside his all-time PB in 1:41. Robert McArdle folowed in a season's best of 1:42 with Lucy Roberts narrowly missing her 2014 mark by less than a minute in two hours dead. Gwenda Williams recorded her second fastest ever half marathon despite the hills and rain in 2:10. Completing the line-up was Brendon and Yvonne Buckley crossing the line together in 2:27 almost three and a half minutes inside their 2014 time on the same course. 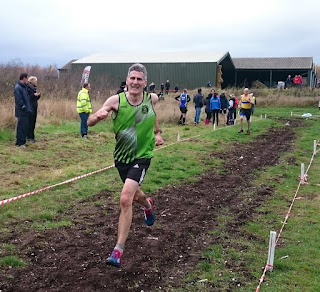 Grantham Running Club put out 2 teams for the third match of the Lincolnshire x-country league which was held at Gainsborough Academy in rather chilly conditions. Rob Howbrook put in another strong performance to be the first man home for GRC, and 17th overall, in a time of 35.15. He was closely followed by Chris Armstrong in his first x country race for the club this season. Nev Chamberlain and Andrew MacAllister completed the team's performance. There was a large, strong field for the 6K ladies race where Ruth Dunstan was first home for the GRC ladies in a time of 25.08. She was followed by Sarah High and Nikki Carr. Great efforts were put in by everyone. The ladies and the men's teams are both currently 7th in their respective leagues with one more race to go.