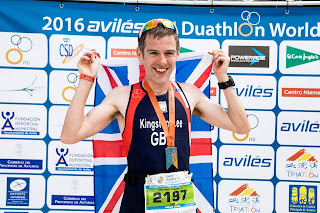 Matthew Kingston-Lee made a sensational debut at World Championship level when he finished seventh in his age group at the 2016 ITU Duathlon World Championships.  The achievement was all the more impressive considering it was only his third attempt at Duathlon and his fourth multi-sport event of any kind. 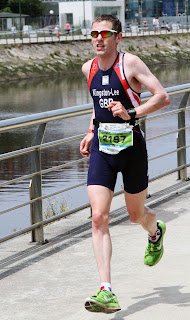 The World Championships, which were held in Aviles, Spain on Sunday 5th June, were held in warm, sunny conditions following several days of cooler, cloudy weather. Competing in the 40-44 age group Standard Distance discipline, the race comprised of a 10.4 km run leg, a 41.2 km bike ride and a second run of 5.5 km. Matthew used his running strength to good effect to complete the opening run in 36.04, which left him in fifth as the field made their way onto the bike leg: 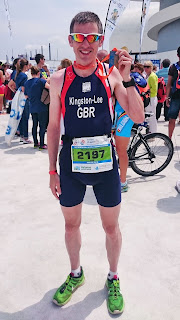 “The opening run went better than planned. I controlled the nerves associated with representing Team GB for the first time and didn’t go off too quick in the first kilometre. I was soon passing plenty of other runners and ended up running around a minute faster than I’d anticipated.
Looking to minimise his losses on what is the weaker of the two disciplines, Matthew set only the 23rd fastest bike time (1:09:38), but was nonetheless pleased with his effort:
“My bike ride at the Dambuster Duathlon at Rutland Water in March was very disappointing. When I heard I’d qualified for the World Championship I invested in a specialist bike and worked hard on my time trialling position. It was by no means a perfect ride but a huge improvement on my last attempt. It was hot though and a struggle to take on board enough liquid. My calves began to cramp at the end of the ride and I feared what lay ahead on the second run”
The final run in a Duathlon is renowned for being a tortuous test of body and mind. It was made harder in Aviles with the hot conditions but Matthew appeared impervious as he set off at the same pace which he ended the first run. Spurred on by the fantastic support from spectators and the fact he was making up multiple positions, Matthew wound up running the second fastest final run leg (19:28), just one second slower than the gold medallist  – former professional Duathlete and multiple World Champion Lee Piercy.
His efforts earned Matthew seventh position in a time of 2:09:30, less than four minutes off the bronze placed finisher:
“I couldn’t believe it when I heard I finished in the top ten on my Worlds’ debut!” said Matthew. “The conditions were tough but I loved the opportunity of representing my country. To clock the second best final run time was a real shock and inspiration looking forward to future events. There is plenty of room for improvement on the bike and transitions, which is an exciting prospect!”
After the race, Matthew thanked the support of his wife Emily, who joined him on the trip to Spain, and her parents, who took care of their young children at short notice to make the trip possible. He also praised the local running, cycling and triathlon clubs:
“I am fortunate to be a member of Belvoir Tri Club, Grantham Running Club, and Witham Wheelers. Coming 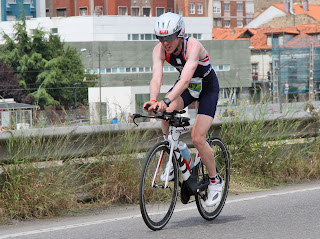 Being from a running background I have especially benefitted from riding over the past 18 months with Witham Wheelers and being self-coached, am indebted to the advice and support from teammates at all three clubs. “