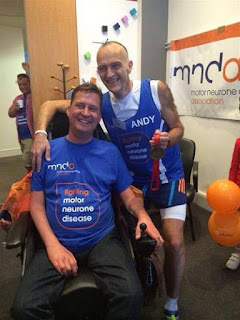 With most of Grantham Running Club’s members opting for more runner friendly challenges this spring it was left to the trio of Paul Rushworth, Gordon Geach and Andy Spencer to represent the club in the capital. In his 9th outing on this course Paul managed to hit his target time of three hours and seven minutes although he had to call on his considerable experience in the final three miles. In his first London Marathon after racing in the Berlin, Paris and Amsterdam marathons Gordon Geach found the overcrowded streets not to his liking and was unable to get into a rhythm but was pleased to eventually finish in 3:55:38.

First time marathon runner Andy Spencer marked the occasion by raising £7,000 for the Motor Neurone Disease Association and finished in a time of 4:05:39, here he is pictured celebrating with his friends at MNDA after the race