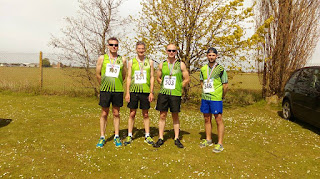 Six Grantham running club runners competed in the Langtoft 10km on Sunday in a record breaking field of 310 runners. Ben Hodgkin in his first race for the club led home his team mates in 21st place recording an impressive 39:12. Close behind in 24th was super veteran Rob Howbrook in a superb time of 39:27. Gavin Meadows, who had raced a Marathon only one week before was 34th in a creditable 40:25, with Chris Armstrong two places behind recording 40:52. Martin Carter recorded a new PB of 51:30 as he continues to improve. Evergreen Brendon Buckley who had run the London Marathon only one week ago ran a highly impressive 59:33.