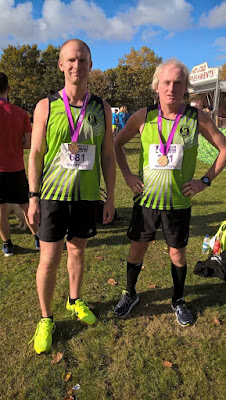 GRC's Gav Meadows & Paul Davis took part in the Leicester Marathon. The moderately challenging course starts & finishes in the city taking in various parks & surrounding villages climbing 419ft along the way. The pair are no strangers to the 26.2 mile distance after completing numerous marathons in recent weeks & months.

Gav crossed the line first in 3:31:38 finishing 143rd in the field of 672 runners. This was his 9th marathon since February as he closes in on his target of completing 12 marathons over a 12 month period. It was also his last long race before the Valencia Marathon next month (his main target race for the autumn). He said 'I set off with the intention of trying to maintain a pace of around 7 mins 30 secs per mile. I managed to stay below 8 mins per mile until mile 20 then my pace gradually dropped off. This result could've been better but wasn't a disaster by any means!'

Paul finished soon after in a time of 3:38:09. A very solid performance especially when you consider that he's been doing marathons most weekends of late. Over a 15 day period he completed this race, the Yorkshire Marathon & the Spires & Steeples Challenge (26 miles) not to mention several other marathons beforehand.

He said after the race 'I was glad to get to the end of this race as I began to suffer with a bad stomach in the last few miles. I was also delighted to be awarded another pink medal!' he joked.