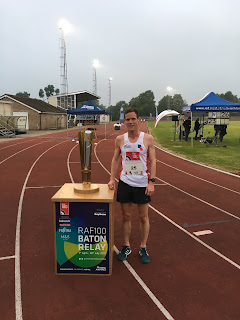 Grantham Running Club’s Andrew Pask was one of one hundred runners from the RAF to have been selected to attempt a new 100 x 10km relay World Record. The event, one of many to mark the RAF centenary year took place at the athletics track at RAF Cosford near Wolverhampton.

The previous record of 69 hours 06 minutes 52 seconds was set three years ago by an American  team at the Shepard High School track in Palos Heights, Illinois. This meant the RAF team would need to average 10km times of 41:28 or quicker to break the record.

With the team running a continuous relay for nearly 3 days, Andrew Pask was handed a difficult 4:20 am time slot having been ready to run from midnight. Guinness rules stipulated that all runners had to run their legs solo, carrying a relay baton which made the 25 laps of the athletics track all the more difficult.

Andrew the 25th runner to go made an impressive start; through halfway in 19:45 and was pushing to run a sub 40min time. Fortunate to have constant time updates from the official timekeepers he left himself with 1min 20secs to complete his final lap. Unable to kick-on, Andrew completed his 10km leg with a time of 40:13 which is still well inside the World Record average.

The incredibly strong team was bolstered by the likes of Ben Livesy, a 2:17 marathoner and head organiser Mike Kallenberg, a 2:20 marathoner. Kallenberg who already this year has clocked 30:40, ran the final celebratory leg in 33:22 at 5:00 am on Thursday (May 24) to take a superb 4 hours and 30 minutes off the record, setting a new World Record of 64 hours 36 minutes and 22 seconds.

The RAF has a fine history of distance running with long-time British Marathon record holder Steve Jones once within their ranks, although they didn’t need the Welshman’s 10,000m PB of 27:39 this time.
Posted by GRC at 24.5.18