The Mallory Park 5K drew some of the finest athletes from across the country including 7 from our very own Grantham Running Club.  With entry limited to men who could run sub 20mins and ladies 24mins, the pressure on some runners to perform was clear. The race was held under strict COVID-19 conditions with the races staggered in ‘heats’ based on predicted finish time and start lines releasing groups of 6 at a time.

First off were the two GRC ladies, Naomi Jepson-Rivers and Vicki Ball with the early 09:00 start. Both ladies were looking to capitalise on the absolute perfect conditions on this flat, 3 lap course around the famous racetrack. Setting a fast early pace the ladies were keen to commit early. Together for the first mile, then Naomi pulled away holding the electric early pace slightly better. Hanging on and continuing to push as hard as possible, the ladies saw out the remaining two or more miles to set huge PBs and justify their place on the start line in this high quality field. Both ladies were delighted with their times and rightly so - Naomi’s time of 22:49  was over 1 min faster than her best set in 2019 and Vicki’s 23:45 was a 40s improvement on her best. 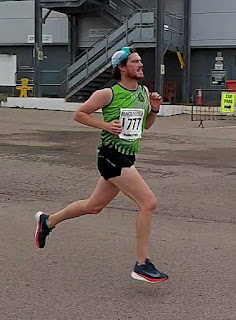 Next up were the 4 men proudly wearing the GRC green vest. Leading the pack off 20s ahead was Sam Jepson-Rivers who was quietly confident of a sub 19min run. Then it was Aaron Smith and Andrew Pask followed by Peter Bonner 10s behind. As with the ladies race, the first mile pace was a little ambitious for most runners all trying to cash-in on a Lockdown spent training hard.  Sam, confident from the offset was never going to be caught. His blistering pace was held throughout earning him a coveted time of 18:40 and placing him very much within the GRC elite. Next was the fast improving Aaron Smith in his first 5k race. Aaron’s time of 19:10 was an outstanding debut over the distance and will certainly run much faster in races to come. Then the consistent Andrew Pask crossed the line with 19:33 to post his 2nd fastest time over the rarely run distance for him. Next was Peter Bonner who’s returning to fitness with a fine 20:01.

The mens race was won by Harry Leleu of Chichester with a time of 14:07 and the ladies was won by Aimee Pratt of Sale Harriers with 15:53.