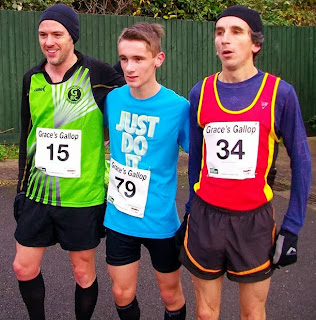 The UK Chasers Cross Country course at Great Ponton was the venue for this memorial race that attracted most of the greats from Grantham running over the past 40 years to pay tribute to Grace Plant, a popular runner and coach who passed away this autumn.

Despite being organised at short notice the event attracted just under 200 entries with a starting line-up including the legendary Ian Fisher putting on a Grantham Vest for the first time in 15 years for this run. Also coaxed out of retirement were Jan Anderson, one of the best veteran female runners the town has ever seen and Dave Madge who wasn’t that far off the pace.  For those who no longer ran such as Chris Cant and Sue Britain there was the option of the walk whilst teammates who were injured or caught up in the organisation such as Tony, Madge, Paul Davidson, John Bainbridge and John Ellerby had to be content with cheering on from the side of the course.

Race Director, Gordon Geach, commented that he was astounded by the quality of the field and thanked those track and road runners for risking their fitness in a hard cross country event.

The photo is (Left to right) Matthew Kingston-Lee, Jake Richardson, and Arthur Short.