Grantham Running Club was represented by eleven of its members at Match 3 of the Lincolnshire Cross Country League on Sunday. The course at Castledyke Equestrian Centre near Boston, although flat, was very wet, muddy and slippery underfoot and there was also the joys of a water crossing (several times) to add to the mix. Rob Howbrook was the lead GRC man for the first two laps of the 4 lap, men's race before suffering a calf injury and having to retire. The team was then led home by Peter Bonner who continues his recent good form, closely followed by Paul Davis and Liam Vincent who both put in strong performances. In the ladies race, Sarah High achieved her best result to date in this season's league finishing 12th overall, with good performances from Caroline Davis and Justyna Gill completing the first GRC ladies team. Vicky Willan, Vicky Dexter and CJ Walker, who are still relatively new to cross country, put in great efforts and brought home the second ladies team for the club. Unfortunately, team mate Angela Carr was forced to retire during the race due to injury. 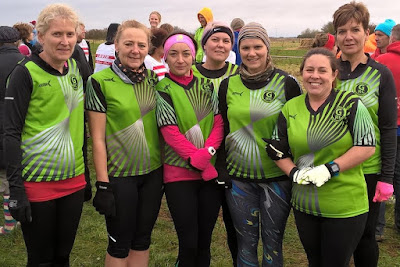