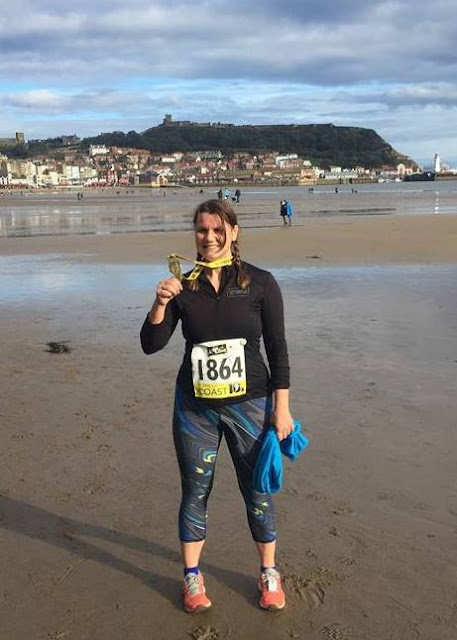 On Sunday 22nd October, Grantham Running Club's Vicky Willan took part in the Yorkshire Coast 10K in Scarborough. Vicky's description of the race & her experience is better than anything the club's reporter could ever dream of writing!
'Where I was dropped off meant a small walk down to the start line at the Spa on the sea front. The view was so stunning I almost forgot to be anxious! There were 2,200 bodies tightly squeezed into a narrow promenade front. Loud speakers and music filled the air and everyone was buzzing. Ten minutes to go and some local fitness instructors warmed us all up. We were all a bit too close for some of the moves but it there were no shy runners near me!'

'It was rather windy. Mild yes, bright and sunny yes, but very windy. In some parts you really did have to drive hard through not to be blown sideways or backwards. It never helped to push you forward for some reason! I think hurricane ‘Breezy Brian’ enjoyed making the runners work hard that morning.'
'As the last kilometre approached the tannoy voices and music got louder and clearer and the excitement of getting close to the finish was in me. I didn’t speed up - I just kept steady so as not to jinx my injury free run. I had just enough energy to sprint past an elderly lady on the finish line!'
'Big thank you to Louise Fenton who gave me her place and to my Scarborough friends who put me up for the night. It would have been too far for me to drive up in the morning but seeing friends and doing a run made it a fab and fun weekend.'
Vicky finished in a time of 1:03:29 which was a solid performance considering injury concerns which affected her preparation for the race.
Report: Vicky Willan/Gav Meadows