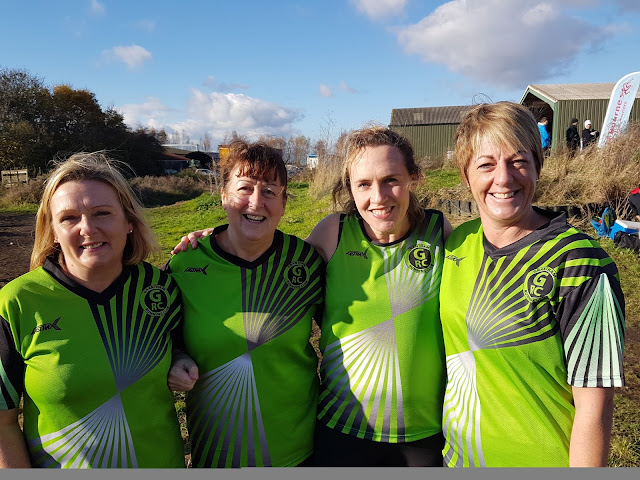 Grantham Running Club was represented at the second fixture of this season's Lincolnshire Cross Country League which took place on Sunday 5th November at Castledyke Equestrian Centre, Boston. The weather was not what you class as normal cross country weather because there were blue skies and it was dry, making conditions favourable underfoot.
The course was mostly flat and fast with the biggest challenge coming from multiple 'water hazards' which had to be negotiated. These were tough but added to the team spirit, camaraderie & enjoyment of the event. The ladies course was approximately 6km (3 laps) whilst the men had to tackle a 4 lap course making approximately 10km.
First home for the ladies in a brilliant 12th position overall, was Andrea Ward 29:39, followed by Nicola Cottam 34:48, Nicola Fahy 34:52 and Margaretta Murray 39:38 completing the women’s team. Gordon Geach 50:31 was first home for the GRC men closely followed by Marc Tremain 53:17 and Ben Mason 54:29
Posted by GRC at 5.11.17