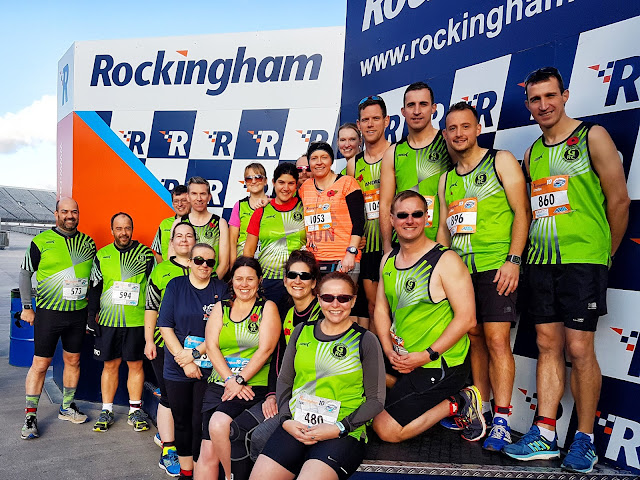 With the lure of some of the best race medals on offer anywhere in the land, there was Grantham Running Club representation at all four of the events taking place at Rockingham Motor Speedway on Guy Fawkes Day. With performances almost as spectacular as the fireworks that filled the skies over the weekend, there was much to celebrate for the Green Army at Europe’s fastest racing circuit.
Thankfully the cold, wet and windy conditions that marred the 2016 event were not repeated this year, although the seemingly ever present wind gusting through the circuit meant that the sunny, somewhat chilly afternoon, could not be considered ideal for racing. The running races utilise both the infield circuit at Rockingham and parts of the 1.5 mile outer oval, which famously saw Indycars lap in excess of 210 mph in 2001 and 2002. Racing circuits generally make for great venues to hold running races and Rockingham is no exception, with wide, smooth, traffic-free tarmac, ample parking and toilet facilities.
In the 5K race, Louise Kennedy made her race debut, finishing a highly commendable seventh in her age category, clocking 33:46. This is eight seconds faster than her best 5K effort at Belton House parkrun. CJ Walker took part in her first 5K race, finishing in 35:10, and there was much delight for Kirsty Carter, who smashed her previous best 5K performance at Peterborough parkun by nearly four minutes, coming home in 36:43. Also making her race debut, Marie Walker finished inside the top 100 in 41:01.
The 10K race, like the 10 mile event, was a round of the inaugural GRC GP Series. Eleven club members finished led home by Martin Carter, whose 50:43 earned him 60th position overall. He was followed by Claudette Joint (51:16) who was an excellent third in her age category on her race debut and twelfth woman overall and Rachael Smith, who ran superbly to better her old 10K PB by over three minutes - 51:35 also earning third position in her Age Category.  Hot on her heels was John Nevard, making his race debut and finishing in a fine 51:39.

Suzanne Britz (53:59) was next to finish, taking a well deserved first position in her Age Category. Hazel Dunthorne made her 10K debut, finishing in 54:49, just ahead of a happy Simon Hartley, who got to ring the PB bell after beating his old best by over three minutes with 55:09. Novice racer Kirsty Truesdale suffered the pre-race nightmare of many a seasoned veteran when her GPS stopwatch showed a low battery warning. She put this first world problem behind her to run a storming 55:21, three minutes faster than her recently set previous 10K best.

Tracey Smith finished inside the one hour barrier in 59:35, claiming third position in her Age Category. Mark Jessop followed in 61:35, bettering his old PB by an impressive four minutes and Claire Fritz was another to set a big new PB, finishing in 64:58.

Seven GRC members took part in the 10 mile race which incorporated the Northamptonshire 10 Mile Championships. Joe Clarke was first home, finishing thirteenth in 1:04:22 - especially impressive considering it was only Joe’s second race, although he is a seasoned parkrun campaigner. He was followed by the first of the near indistinguishable GRC twins, Matthew Atter, who claimed family bragging rights with 17th position in 1:05:34 on his 10 mile debut. This was nearly five minutes clear of brother Andy, who nonetheless could return home happy with a four minute improvement over his previous best 10 mile performance, clocking 1:10:13.

Andrew Pask finished in 1:07:47, just six seconds down on his 2016 ten mile time set almost exactly a year earlier. Peter Bonner continued his fantastic year of running, surpassing his 10 mile best set in June by nearly three minutes, clocking 1:08:45. Dean Riggall showed a return to form with his 1:11:36, with wife Julie concluding a highly successful day for the club when she recorded her first 10 mile finishing time of 1:36:17.

Earlier in the day GRC Club Chairman Matthew Kingston Lee finished third in the Rockingham Standard Distance Duathlon. It was noted that his 10K run of 35:09, that saw him lead into the transition for the 38km bike leg, was over 40 seconds quicker than the winner of the official 10K race, and his 5K run that followed the bike ride was 13 seconds quicker than the official 5K winner!