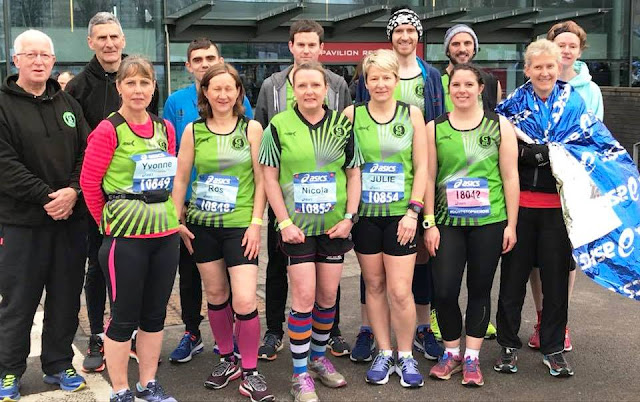 Grantham Running Club runners were out in great force to represent the club at the 2018 Greater Manchester Marathon which took place on Sunday. With over 13,500 runners taking part, it was a hugely popular event. Participants couldn’t have wished for better running conditions with Spring well and truly in the air and temperatures not too high to make for a perfect day.

The scene was set and the race was ready for some great times, back stories, achievements and PB’s.

Out of the 14 GRC representatives, there were an impressive 9 marathon debuts. Grant “Chops” Davies was GRC’s first runner to cross the finish line, with an outstanding 3:10:40, in what was his first attempt at the marathon distance. Matt Kidd, another first-time marathon runner, was the next to cross the line with a brilliant 3:16:21.

Rob Howbrook ran a great race to finish at 3:26:23, which was a good for age time which can qualify him for London in 2019. Sam Clark’s first attempt at a marathon was also impressive, crossing the line in 3:27:45.

Matthew Williamson, who ran made his marathon debut at Manchester in 2017, finished in 3:45:04, some way off his best, but an heroic effort given he suffered for much of the second half of the race with an Achilles injury.

Caroline Davis ran a personal best by over 37 seconds with a superb finishing time of 3:50:15. Adrian Walker paced himself superbly to break four hours on his marathon debut, clocking 3:58:59.

Nicola Cottam (4:36:58) and Amy Potter (5:01:23) both clocked really impressive times for their first ever attempt at the marathon distance. Julie Gilbert, who was running her fourth marathon, finished with a personal best of 4:52:19, shaving 30 minutes off her previous best. Rosalind Sadler followed Julie over the line in her first ever marathon with a brilliant time of 4:52:20

Husband and wife duo Yvonne and Brendon Buckley both ran Manchester, finishing in 5:20:29 and 5:31:19 respectively. There was disappointment however for Jacqueline Jacobs, who was forced to retire having passed halfway in 2:28:47.