On Saturday 22nd September 54 runners represented Grantham Running Club at the Equinox 24. Set in the beautiful grounds of Belvoir Castle, some opted for the separate 10K races taking place, while the vast majority opted for the more challenging 24 Hour endurance event, either as part of a team with five or eight runners, or taking on the ultimate challenge by running solo.

The course is an undulating multi terrain 10K that was made even more difficult by very heavy rain on both Friday and Saturday. Even the howling of the hounds was being drowned out by the squelching sounds made by the thousands of feet as they pounded across the muddy fields.

As night fell four GRC runners lined up with their head torches blazing for the night time 10K with Gav Meadows impressing again finishing in 6th position in a time of 46:41 followed by Emma Weighill 1:18:11, Yvonne Buckley 1:18:12 and Melanie Taylor 1:18:15.

In the 24hour relay event ‘Team GRC’, captained by Penny Hodges, had a hard fought battle on their way to a podium place finishing third out of 120 large teams and seventh overall, completing 29 laps totalling 290 kilometres between the team of eight.
The team started off strongly with Stuart Sinclair running an impressive 42:46 for his first lap on the wet course. Team members Jack Dodwell, Jason Walker and Sarah Chenowyth ran their first 2 laps consistently at sub 50 minutes, but the team suffered a setback with team member Holly Durham being forced to withdraw after her second lap due to an Achilles injury. Down to just seven runners, ultra-marathon hero Nick Payne stepped up to the plate, running four consistent laps just hours after completing the Toys in the Attic Marathon in Milton Keynes the previous day. Liam Vincent bought the flag home for the club, running the final lap and completing his first ever four laps in a 24 hour endurance relay.
Team Shig were all making their debut appearances at Equinox with team members Claire Fritz, Hayley Staff, Sylv Hull, Yvette Taylor, Vicki Geeson, Kat Gray, Sue Swann and Captain Edina Burns all completing a lap each before 10pm on Saturday. The team went onto to complete 15 laps with some team members deciding to accompany their team mates on some laps with only one runner’s lap counting towards their total. A special mention has to go to Sylv Hull who completed 4 laps for the team. The team thoroughly enjoyed the event despite the treacherous conditions. They all vowed to return next year as solo participants so that they can do what they enjoy most, running as a group with friends.

‘Team GRC and the Magic Torches’ completed a very creditable 22 laps. The team comprised of a mixture of seasoned Equinox runners and Equinox debutants. Kev Kettle ran the first leg in a time of 50:50 before handing over the baton to his team mates Nicola Cottam, Sarah High, Nicola Fahy, Rachel Pattison, Justyna Gill and Gordon Geach who all ran solidly throughout the gruelling event.

‘Team Nathan’s Runners and Walkers’ were named in honour of former team mate, the late Nathan Walker. The eight-strong team became a team of seven after captain Nick Jones was forced to withdraw before the start of the event, leaving them with only Jacqueline Jacobs as a team member with previous Equinox experience. The team was dealt a further blow when Konrad Owczarek was forced to withdraw with injury after completing his first lap, leaving the team with just six runners. The team rallied together with Paul Jepson, Lucinda Gamble, Kirsty Carter, and Adam Jacobs all running well throughout, and was capped off with a fine performance by Chris Toon who completed five of the team’s nineteen laps.

CJ and Ady Walker made their Equinox 24 debuts and chose to run as a pair in memory of their son Nathan who would have been 21 years old on Saturday 22nd September. Both CJ and Ady picked up injuries on their first lap but were determined to soldier on and do as many laps as possible, but with the condition of the course worsening with every lap this was not going to be an easy task. By 10:30pm they had completed seven laps in total and decided to rest up for the night and start again in the morning. They eventually went on to complete 11 laps in total with CJ finishing of with a double lap to take them up to 41st place out of the 82 pairs competing.

The club had five solo runners: Martin Carter, Suzanne Britz, Julie Gilbert, Lizzie Potter and Rosalind Sadler. Suzanne is a regular as a solo Equinox runner and on this occasion chose a relaxed approached by running four laps at a controlled pace which then enabled her to relax and enjoy the warmth of the camp fire. 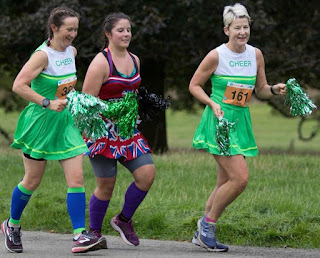 of fire being also her first time at Equinox. Initially all four had a lap target and had planned to run them together. However, injuries and illness in the run up to the event meant plan ‘wing it’ was formed.


Martin did amazingly well to complete four laps while suffering from an illness. He also made the perfect running companion for his wife, Kirsty, when she completed one of her team’s laps in the dead of the night.

The first lap was completed by all three ladies together. However, with Ros suffering a hamstring injury, by midnight on Saturday she had completed three laps to Julie and Lizzie’s five. As dawn broke, the three were able to take in the beautiful views of Belvoir castle inspiring the ladies to complete a further three laps each that brought the final total to six laps for Rosalind and eight for both Julie and Lizzie, finishing as one and carrying the GRC flag over the finish line.

The trio adorned a multitude of fancy dress outfits over the weekend, including cheerleaders, bumble bees, elves and skeletons. The highlight though had to be the nuns’ outfits on the penultimate lap on Sunday morning which saw them tackle ‘that hill’ whilst singing “The hills are alive with the sound of music!”

After the event Julie commented that they may have been running solo but being part of the mighty GRC was one of the best things about the weekend; the lack of sleep, the cold, strong winds and the biblical rain have all been forgotten with the magic that is Equinox.
Entries are already open for Equinox 24 2019 if you want to sign up for more of the same next year!