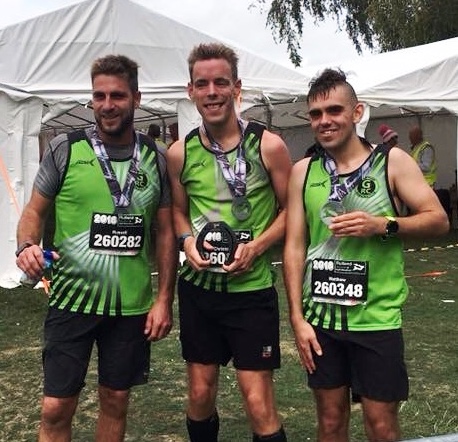 On Sunday 16th September a small group of Grantham Running Club athletes made the short trip down the A1 for the Rutland marathon and half marathon. The trails and paths around the reservoir make for some stunning views across the water and offer runners the chance to spot some of the wildlife that call Rutland their homes. The route started at Sykes lane and goes clockwise around the reservoir before looping back. After passing the Sykes lane car park the half marathoners then make a final 180 turn soon after with a couple of miles to go in order to complete the 13.1 miles. Full marathoners continue through the Barnsdale car parks and the around the peninsula before making the run for home.

The events have increased massively in popularity over the past three years and on race day there were double the participants compared to 2017 across the half and full marathons. Such were the queues to collect numbers and drop bags that both races were delayed by about 15minutes. When the start did come runners soon crossed the dam and began running clockwise around the reservoir the athletes were greeted with strong gusty headwinds and faint drizzle in the air. The rain cleared but the winds remained leaving runners having to deal with another challenge on top of completing the distance.

In the full marathon GRC had third place finisher from 2017 Matthew Williamson hoping to put in a solid well-paced run similar to that which helped him podium last year. Unfortunately, through a combination the unrelentingly windy conditions taking their toll and missing a turning meant he crossed the line in a still none too shabby 3:47:18. Following closely behind was Russell Love whom was taking part in his first ever marathon. Despite struggling from 20miles (which even a seasoned marathon runner will find happening) he finished a truly commendable 3:47:54. Given the conditions and the twists/turns/hills of the peninsula this was a very impressive debut and hopefully not his first 26.2 miles in the green and black of GRC. The same could also be said for new member Clive George whom completed the marathon in 4:57:30 which placed him 11th in his age category.

Also running the marathon was Chris Limmer. When he last ran the event in 2016 he was in the leading group only for a lack of long training runs to take its toll before dropping back massively. This time he approached it a little more cautiously and decided to take the race at a comfortable pace which it was hoped would leave him coming off the peninsula with 6 miles to go with enough in the tank to gain rather than lose positions. As it transpired he passed 15miles in 5th and picked up a place without having to up the pace too much during the next 9 or so miles. Coming into the final mile he felt happy to be coming into finish 4th in a marathon. However, as he crested the last hill of note he spied an athlete whom he thought was a marathoner. Sensing his chance of a podium he picked up the pace and cruised by and used the choice words the runner said to himself as motivation to up the pace further. A direct consequence of speeding up was that the runner in second began getting nearer. Entering the final straight it was a sprint for the line. With metres to go Chris eeked ahead. Chris was overjoyed with finishing second and the time (5 minutes improvement on 2016). He felt glad that he could add to the haul of trophies which GRC had collected during September and on a real high for future races in the final months of 2018.

All in all the small band of GRC runners were pleased with their performances and really enjoyed their morning run by the reservoir.

In the half marathon GRC had 4 athletes taking part. Despite suffering from a virus in the run up to the extent that she was thinking of pulling out Kate Marshall finished her first ever half marathon in 2:26:38. Despite the conditions leaving her slightly windswept it left her in good spirits. She is running a number of half marathons in the coming months and to date has raised over £300 for the make a wish foundation and is looking forward to running her next one in two weeks-time. Three GRC men also took part with the first of these being Simon Smith in 1:48:34. He was followed by Steven Green in 2:02:05 with Neil Emerson completing the trio in 2:06:09.