A bumper turnout of thirty five represented the ‘Green Army’ of Grantham Running Club in Peterborough on Sunday 14th October for the Perkins Great Eastern Run. Despite the torrentially wet conditions, the club enjoyed a highly fruitful day of racing with no fewer than fifteen personal bests set, five members making their debut over the half marathon distance, and an unprecedented eleven GRC runners breaking the prestigious ninety minute barrier.
The heavy rain that fell before, during, and long after the race may have largely stifled the usual pre and post race group photos as runners generally hid as best as possible from the elements, but it could not dampen the spirits of the PB chasing runners. The course, which begins on the Embankment in Peterborough city centre and utilises plenty of residential streets and footpaths as it makes its way to Werrington and back, may not be everyone’s cup of tea, but it is undeniably flat, very fast, and regularly attracts the cream of the region’s best runners and plenty from beyond. Although barely a whisper of a wind compared to the gales that Storm Callum had brought to the region 24 hours earlier, there was still a headwind for much of the opening half of the race before it became largely favourable for the return south to the finish.
First home for the club was the on-form Matthew Kingston-Lee who clocked a superb season’s best
time of 1:15:17. Although narrowly missing out on a PB and a top 50 finish position overall, it was Matthew’s second fastest ever half marathon, placing him sixth in the V40 age category and earned him an age grade PB of 83.92%. As a runner who tends to suffer in cold, wet conditions, Matthew would almost certainly have broken his best on a more temperate day.

First GRC woman home was the exciting new prospect Jos Smith, who finished an excellent 48th in the women’s race and smashed her PB by just shy of five minutes, clocking a fantastic 1:35:03. This is only Jos’ second ever race, yet she has shot up to #5 on the all-time GRC half marathon list.
Matthew Williamson was the second GRC runner home with arguably the performance of the day. In his best ever race he bettered his previous PB by over four minutes, running an outstanding 1:24:40, making him currently the second fastest GRC runner over the half marathon distance in 2018. Joe Clarke was next home for the club with a near two min PB of 1:25:54. Dean Riggall followed Chris Limmer (1:26:13) beating his previous best by over two minutes with an excellent 1:26:39.
Just a week after his big new PB at the Cardiff Half, Andrew Pask ran very well again to clock 1:26:45, 32 seconds ahead of the prolific Tony Johnson, who clocked a season’s best 1:27:21 in his tenth half marathon of 2018. The ever improving Peter Bonner posted 1:27:51 taking an eighty second chunk off his previous best and Joaquim ‘Flash’ Jeronimo continued his incredible run of PBs with 1:28:31, bettering his previous attempt at the distance by over ten minutes.
Gerry Hyde ran one of his best races in many years. He was delighted with his 1:28:37 time which earned him a very fine 78.92% near national standard age grade. The eleventh GRC runner to break one hour thirty was Ian McBain. Just a week after running 1:31:43 at the Bournemouth Half Marathon, Ian defied his own expectations, smashing through 90 minutes with 1:29:03.
Kevin Kettle missed out on breaking the 1:40 barrier by the narrowest of margins, clocking 1:40:01, but smashed his previous best by nearly three and a half minutes. Of the other male GRC finishers, there were personal bests for Sam Dodwell (1:50:33), Mark Edwards (1:55:12), and Kristofor Blake (1:56:35), with two other runners, Chris Moore (1:42:07) and Anthony Boyle (1:54:45) making their debuts over the distance. Jason Blair (1:35:33), Chris Toon (1:47:34), Nev Chamberlain (1:49:55), Wayne Baxter (1:59:28), Steve Green (2:12:03) all completed the race and, like all other finishers, earned themselves medals, technical t-shirts and a small race bag for their efforts. 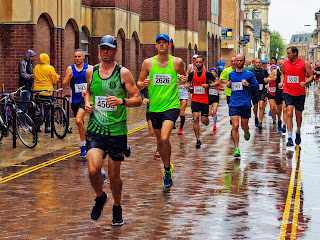 Behind Jos Smith, the next GRC woman to finish was Penny Hodges. Returning to something approaching her best form, Penny narrowly missed her PB set in 2015 by just four seconds with a time of 1:39:52. Maxine Noble had a great debut over the half marathon distance to clock 1:43:40. She was followed by Helen Brown, who ran her fastest half marathon since 2012, clocking 1:45:19, and the ever impressive Julie Baker, who couldn’t quite better her recent time set at Nottingham which ranks her second currently in the country for 2018 in her age category and 7th on the AT list, but her 1:50:15 saw her finish second in her age group with a mightily impressive age grade of 89.82%
Behind Julie was Sarah High, who ran well to clock a season’s best 1:53:48 having also represented the club as Women’s Team Captain at the North Midlands Cross Country League less than 24 hours earlier.  Next home was Julie Gilbert who ran a great race in the tough conditions to smash her PB by over four minutes with a speedy 2:02:52. Behind Julie there were personal bests for Sylv Hull (2:14:16), Sue Swann (2:25:29) and Samantha Clark (2:30:10). Dona Hall (2:21:32) and Claire Knowland (2:42:34) made their debuts over the distance, with Tracy Webb (2:16:09) and Amy Potter (2:18:45) both running well to finish in trying conditions.