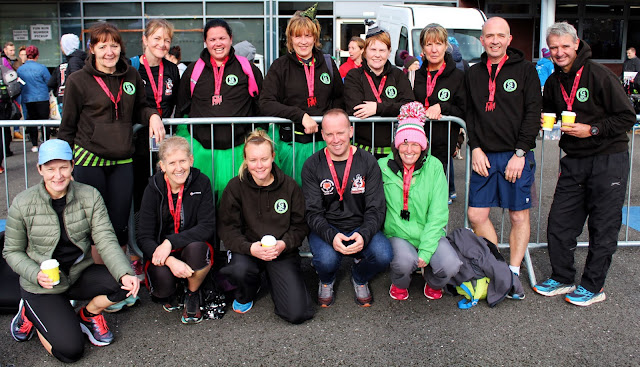 Twenty eight members of Grantham Running Club made the journey up the A1 to take part in the 37th Worksop Halloween Half Marathon on Sunday 28th October. The popular race, which saw over 2300 finishers, takes runners up and out of Worksop on a constantly undulating course, into and through the Clumber Park, especially resplendent with the autumnal colours and mostly blue skies, before returning back to Worksop for the thankfully downhill finish.
With Halloween themed fancy dress encouraged, the race strikes a great balance between a fun event and a serious road race being that it, once again, incorporated the Nottinghamshire Half Marathon Championships. It was pleasing to report that with a great deal of effort from the organisers, Worksop Harriers AC - aided by the support of over 150 volunteers, that the issues regarding pre-race number collection and post-race baggage reclaim that afflicted the 2017 race were smoothed out, making this race arguably one of the best value and best hosted races in the region. 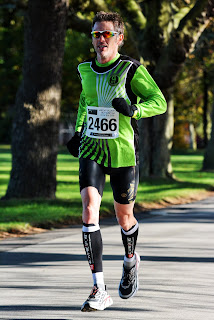 First home for Grantham Running Club was Matthew Kingston-Lee. Making a cautious start having not quite fully recovered from a chest infection and self inflicted injury caused by running into railings during training, ‘MKL’ ran a near carbon copy repeat of his 2017 race to finish stronger than those around him, coming home eleventh in 1:16:23. Finishing third in the V40 age category (Winning £15!) Matthew was ‘very pleased’ particularly to finish a whole one second faster than in 2017.

Matthew Williamson was next to finish for GRC, pleased too with his very solid 1:26:42, two weeks on from his PB at Peterborough. It was half marathon number eleven in 2018 for the prolific Tony Johnson, who again ran very well to clock 1:28:13. Rob Howbrook appeared a touch disappointed that his 1:32:06 was a couple of minutes down on his 2017 time, especially as this year it was a round of the GRC Grand Prix Series and the reigning champion is, once again, in a tight battle with MKL, who managed to score three more points than Robert.

Behind Robert, Paul Rushworth was a welcome face at the race given that he currently lives well 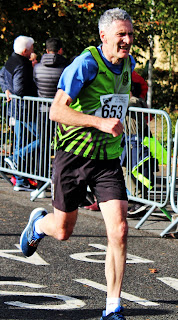 away from the Grantham area; his 1:36:36 a solid performance from the well travelled runner.

Immediately after the race, Holly Durham admitted there is ‘much to do’ to get back to peak fitness, having suffered for some months with an Achilles injury. The positive news from Holly, who was first GRC woman home in 1:39:20, other than posting a faster half marathon time in 2018 than her sister Penny, is that the issue seems resolved and she can look forward to training fully for the 2019 Manchester Marathon.

There was much joy for Kevin Kettle who missed out on breaking 1:40 at Peterborough by just two seconds, but finished just behind Holly in 1:39:31 to set his second half marathon PB in October. Following Kevin, Jack Dodwell was looking to break 1:40 after a disappointing run at the Royal Parks Half Marathon and so he did, thanking Kevin and Holly after the race for their help with pacing.
Simon Smith, finishing in 1:42:05, was another runner who declared themselves ‘very pleased’ after breaking his half marathon PB by exactly two minutes. Helen Brown (1:45:48) ran well to be under half a minute slower than her time two weeks earlier on the faster Great Eastern Run course. She finished just ahead of Clive George who, in his first half marathon in GRC colours, arguably put in the performance of the day by smashing his PB by ten minutes, clocking 1:46:13.
A great run from Caroline Davies saw her finish just ten seconds off her PB, breaking 1:50 for just the second time with 1:49:22. Anthony Boyle ran his second half marathon two weeks after making his debut and was ‘really pleased’ with his time of 1:54:43, a couple of seconds better than his effort at Peterborough. Behind Anthony, Sarah High (1:56:23) and Sam Dodwell (1:57:30), both ran well to break the two hour barrier.

Having set a PB at Peterborough, Julie Gilbert was very happy to go faster still - clocking 2:01:56, commenting that the course was ‘beautifully scenic, but with far more hills than I remembered!’ Tracey Smith also remarked on the beautiful, but undulating course; the pain of a bruised toenail will hopefully be compensated by a cracking new PB of 2:11:31, just under five minutes quicker than her previous best, set at the Robin Hood Half Marathon last month. Tracey ran with Belinda Baker, who clocked the exact same time and also set a big new PB, nearly ten minutes quicker than her previous best. 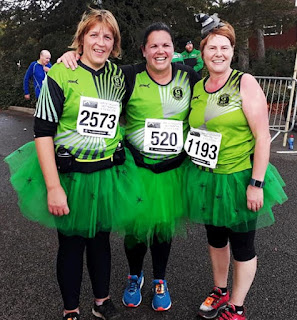 Behind Belinda and Tracey, Nicola Cottam finished in 2:21:58 and Sue Swann 2:32:05, running their third and fourth half marathons of 2018 respectively. Running with Sue and clocking the same time, Yvette Taylor had a great run to better her debut by over ten minutes, pleased to have tried and completed a second half marathon having been put off by the infamously hot and tough 2018 Sleaford Half. Next to finish was Edina Burns who was determined to make her half marathon debut, despite coming down with a cold ahead of the race. She thanked her friends afterwards for getting her around in 2:33:55, especially when the going got tough at mile ten.

Completing a successful day for GRC, Vicki Geeson (2:44:59) and Yvonne Buckley (2:45:00) finished together, as they had begun and for the entire way around. Successfully finishing her first half marathon, Vicki thanked Yvonne, without whom she felt she would not have finished.
The race was won by Kristian Watson of Sutton-in-Ashfield Harriers & AC in 1:11:26 with Alice Thackray of Charnwood AC the winning woman in 1:26:52.
Posted by GRC at 28.10.18