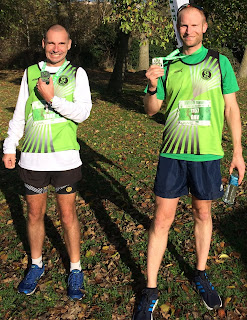 Grantham Running Club duo Tony Johnson and Gav Meadows took part in the St Neots Half Marathon on Sunday 18th November. The race, organised by Riverside Runners, starts in Eynesbury just outside St Neots. From there the course heads south for a mile before a ‘figure of 8’ taking in the villages of Lansbury, Abbotsley, Waresly and Eynesbury Hardwicke. The final mile is the first mile in reverse taking the runners back to Eynesbury for the finish. The course is moderately challenging with a total climb of 411ft. The weather on the day was perfect for running - a clear, sunny day with very little wind and temperatures well over 10 degrees celsius.

Tony adopted his usual aggressive strategy of starting the race at a fast pace and trying to maintain it throughout. It was clear from the start that his impressive run of recent form was likely to continue. Passing Gav at the 1 mile mark, he was clearly in a positive mood. Running an even paced race, Tony crossed the finish line in an outstanding time of 1:25:32. This was good enough for 7th position in the Male Veteran 50 category. Furthermore, this was a season’s best - bettering his already impressive time by almost two minutes. Tony also played his ‘joker’ for the GRC Grand Prix Series - adding this race to the standard list of races included. His timing couldn’t have been better - taking full advantage of his best age grade score of the year (78%).

Gav was looking continued improvement after his recent return to good form at the Amsterdam Half Marathon. This was also the first of a series of races to supplement his training for the Barcelona Marathon in March. His day got off to a bad start as he felt a mystery niggle in his left shin throughout his warm up. This continued to bother him for the whole race. He said ‘I have no idea where this problem came from. I felt no pain during my easy run on the Friday before the race. At mile eight the pain reached a peak - to the point where I was doubting my ability to finish the race. Luckily it eased off from there although my pace slowed significantly.’ Despite his troubles Gav battled on to a season’s best finishing in 1:30:38 and improving on his Amsterdam time by just over a minute.
Posted by GRC at 18.11.18