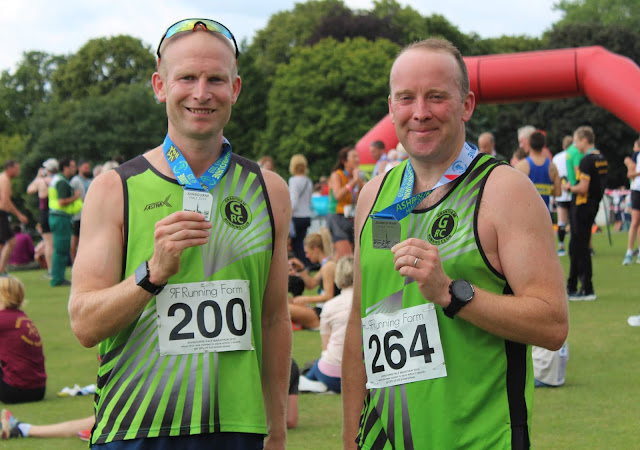 On Sunday 7th July Grantham Running Club’s Gav Meadows and Paul Rushworth took part in the Ashbourne Half Marathon. Paul currently resides in Stone, Staffordshire so had significantly less distance to travel than Gav. The scenic but challenging race starts in Ashbourne’s market place. The first mile or so is around the town itself before heading into the Peak District National Park taking in Thorpe, Ilam, Blore and Okeover (where a mentally draining ‘switchback’ adds the required distance to the route). The finish is in Ashbourne’s park and sports grounds - close to the town’s rugby club.

Conditions on the day were fine and dry with the temperature perhaps slightly warmer than the ideal for running. On the plus side there was very little wind. The course is challenging to say the least, boasting an elevation gain of 1025 feet. Gav commented ‘I did this race back in 2015 but I don’t remember it being this tough! I can’t be sure but I think the course may have been changed slightly to include more hills.’

Gav confidently positioned himself close to the front on the start line where lots of veteran runners were lining up - the race incorporated the 2019 British Masters Half Marathon Championships. He also started confidently completing the first mile in just under 7 minutes despite the undulating terrain. However, he soon learned that this pace wouldn’t be realistic for the rest of the race.

He said ‘The first 8 miles were the toughest with most of the climbing being crammed into this part of the race. Miles 4 and 7 were particularly taxing with each boasting in excess of 200 feet of elevation gain. There was a big, long descent at mile 9 and things got easier from there - relatively speaking!’ Gav finished in 1 hour 41 minutes 22 seconds - at least 10 minutes slower than the time he would expect to run on a flatter course. He placed 93rd overall in a field of 362 runners and 33rd in Senior Male category.

Paul took a more cautious and perhaps more sensible approach on the start line positioning himself much further back. He also started the race in a similar manner and clocked almost a minute slower than Gav for the first mile. He said ‘I knew going into this race that my fitness wasn’t what I’d like it to be. A conservative approach suited me best and meant I could relax and take in the beautiful scenery that the course has to offer. The views at the highest points were stunning but you had to work really hard to earn them!’

Paul finished in 1 hour 46 minutes 25 seconds placing 122nd overall. This was also at least 10 minutes slower than he what he would hope to run on a flatter course. He also placed 32nd in the Male Veteran 40 category.
Posted by GRC at 7.7.19