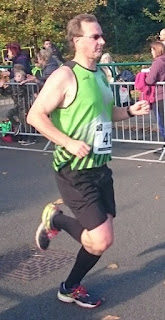 The Newstead Abbey Dash is a 5k race organised on a Friday evening by local club, Redhill Road Runners. Eschewing the modern trend for complexity, glamour and bling, they provide a simple race along a traffic-free road through a scenic country park. The race has been sold-out for before the night for the last couple of years.

The course is simple, downhill for a kilometre along the drive until you pass the point where the finish will be, continue up the driveway for another two kilometres, then do a 180 degree turn and run back to the finish. Kilometres are marked.

Although billed as "overall downhill" and "gently sloping" in various reviews, there are some notable inclines, though the benefit of the course is that you go down more than you go up.

This year the race was chip-timed and results were available on-line by the time runners awoke on the Saturday morning.

In 2017 the event was marked by very heavy rain, which left the course difficult to run due to low light under the trees and pot-holed roads. 2018 instead had high temperatures and a moderate breeze, though fortunately the wind was blowing downhill not uphill.

Only one member of Grantham Running Club made the trip to the Abbey for the event. Peter Bonner completed the race in a chip time of 18:58 (WMA 73.05%), which is a personal best for the distance. He was 39th of the 218 finishers.
Speaking afterwards, Peter said "I'm thrilled with the time. I'd entered the race again after running last year because I hoped it could be fast, but had forgotten the amount of uphill. Ultimately, I pulled it off with a sprint finish on the final downhill part, and managed to hold it together for the final uphill to the finish. The organisation worked well and I enjoyed the race, so thank you to the organisers."
Posted by GRC at 13.7.18