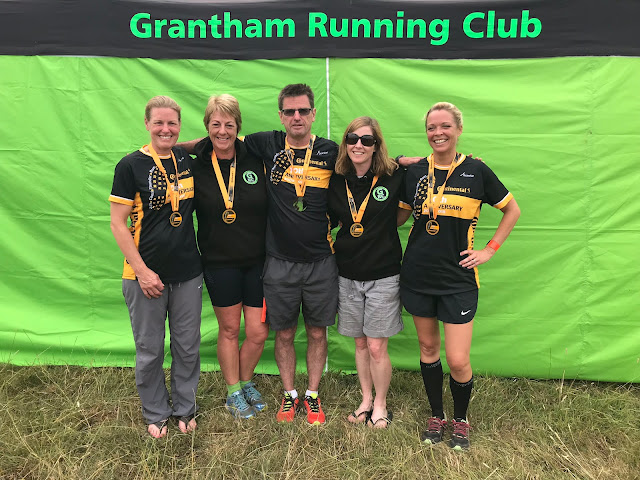 Captain Helen Brown a veteran of 7 previous Thunder Runs took the responsibility of negotiate the notoriously frantic first lap where all the runners are tightly packed on a narrow windy course.

Next in the team was Ros Saddler, whose only previous experience was in last year's race where the conditions consisted of mud and torrential rain. This year's unprecedented high temperatures providing a different challenge.

Another veteran of the event was Sam Bainbridge who used all the mental toughness that he gained from his cross channel swimming experience to successfully complete his 18 mile effort which is an excellent achievement considering running isn't his chosen sport.

Also running was Warren Stark who was competing in his 2nd TR24 event. Thankfully this was a much more successful outing with last year's effort being curtailed early due to injury.

Debutant Sinead McDonnell continued her progress in endurance running taking the challenge of 3 laps in her stride.

Gordon Geach another veteran of the TR24 was taking the slightly more conservative option this year having competed as a solo competitor in 2017.

The final 2 members of the team, Emma Weighill and Nicola Fahy were running in their first TR24.  Both were very pleased with their achievements describing the event as character building, challenging, bonkers but overall they loved the camaraderie of the team. Bring on 2019.

Overall the team were very pleased with their total of 23 10k laps in what is a physically and mentally demanding event.
Posted by GRC at 21.7.18