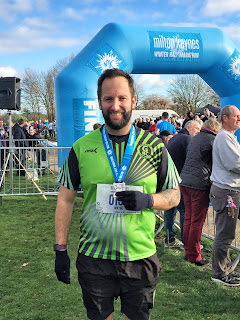 On Sunday 9th December Wayne Baxter of Grantham Running Club headed over to Milton Keynes to take part in the MK Winter Half Marathon.

Based at Willen Lake, the scenic course incorporated numerous canal and river footpaths on a single large lap around Milton Keynes.  On a fairly fast and flat course, Wayne was hopeful of a quicker time than his 1:59:26, but had been nursing a cold the week before and was happy to just get around the 13.1 miles course in a time two seconds quicker than his previous season's best set at Peterborough in October.