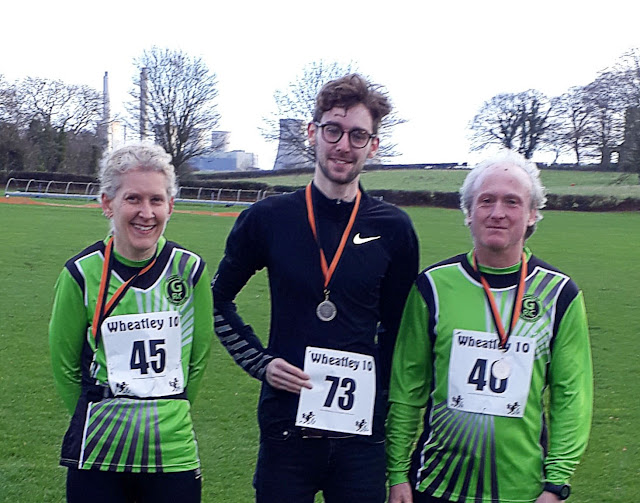 Three members of GRC took part in the Wheatley 10 mile multi terrain race in North Nottinghamshire on Saturday 8th December. Cameron Hoggan, Caroline Davis and Paul Davis tackled a course that follows farm tracks, field edges and public footpaths in a complicated series of loops through undulating countryside in the shadow of the magnificent West Burton power station.
Despite the wet weather in the week leading up to the event, conditions underfoot were surprisingly good with dry but windy weather forecast for the race.
The relatively small field of 160 runners set off at 9:00am and Paul only made it to the first kilometre before hitting the ground, thankfully with no damage done, slipping when leaving a wooden foot bridge. Cameron made the early pace among the GRC contingent, quickly pulling out a 50 meter gap on Paul. Predictably the longest climb of the course was made into the gusty wind with runners bunching up in the hope of some shelter.
By the halfway point Paul had dug in and was on the heels of Cameron. This only served to spur Cameron to push on and pull out an even greater advantage to see him finish a fine seventeenth in a time of 1:22:25. Paul crossed the line a minute later, twentieth in 1:23:30, while Caroline, who set out with the intention of enjoying the race rather than racing it, finished forty seventh in 1:35:35.
Back at Wheatley village hall runners were awarded with a medal, running vest, and free tea and biscuits.
After the race Caroline commented: “At the top of the long climb, a gust of wind nearly stopped me in my tracks! I couldn't run any quicker! But the views were fantastic so I'm sure I'll be back.”
Posted by GRC at 8.12.18