Twelve members of Grantham Running Club took part in the third race of the North Midlands Cross st December 2018. Thanks to it being one of the busiest shopping days of the year, the journey from Grantham to the venue at Shipley Park in Heanor was nearly as arduous as the course itself. Late arrivals and the popularity of a single toilet cubicle each for men and women meant the races were delayed by ten minutes, but aside from these difficulties the event was a well organised, highly competitive affair, held in comfortably mild conditions for the first meteorological day of winter. 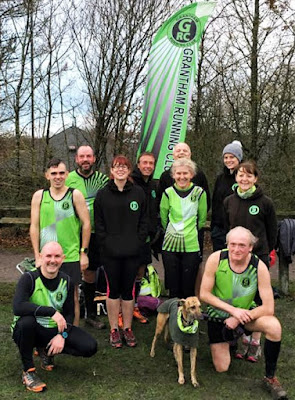 The women were off first, taking part on a two lap course of approximately six kilometres. Heavy rainfall in the week meant the constantly undulating course was churned up with sticky mud in places, making the going particularly difficult. Caroline Davis was first home, running well to finish 93rd in 38:07. She was followed by Sarah High in 111th (40:29), Sylv Hull 138th (47:35) and Diana McDonald 140th (48:05). This gives the Vets team 8th overall in the standings. The race was won by Chloe Hubbard of Newark AC in 27:55.

The men raced over an approximately ten kilometre course comprising of one small lap, then two large laps. Matthew Kingston-Lee made a lackadaisical start that saw him spend the rest of the race making his way through the field, ultimately finishing 51st in a time of 38:37. A far cry from his fourth place at Belton House in the Lincs XC Leauge, it is perhaps worth pointing out that Belton House winner Will Tucker of Grantham Athletics Club finished 40th in 37:44.
Matthew Williamson came home 122nd in 43:00, closely followed by Rob Howbrook (127th, 43:36) who was an excellent second in the V60 age category. Simon Smith finished 190th (48:52), Paul Davis 200th (49:21), Chris Toon 203rd (49:38) and Russell Maksymiw 215th (53:08). Daniel Howson dropped out part way through the race, troubled with an injury and a very large breakfast!
As with the women, GRC unfortunately didn’t complete a senior team but had a strong showing in the Vets table, finishing fifth of twelve teams on the day which saw them climb to ninth in the overall standings with one race remaining. The race was won by former Grantham Athletics Club member Jake Richardson of Lincoln Wellington AC in 33:07.
Posted by GRC at 1.12.18