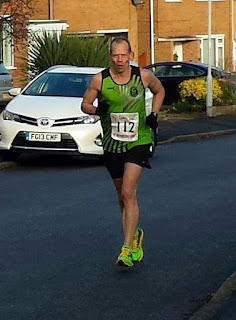 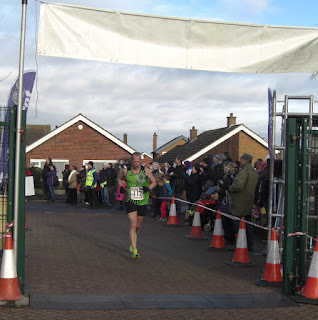 Seven members of Grantham Running Club took part in this year’s Keyworth Half Marathon including recently married Brendon Buckley making his debut at this distance. Despite only starting running with a 5k Parkrun at Newark earlier this year Brendon who is the super veteran category, has steadily built up his distance through the Lincoln 10k in April to the point where he was able to finish this tough hilly 13.1 mile race accompanied all the way round by his wife Yvonne who is an experienced runner having completed this event last year. They were joined by Ironman Jez page using the route to check his running speed for his next triathlon and several ladies from the successful GRC ladies X/C team exchanging their spikes for their road shoes. Full club results below; 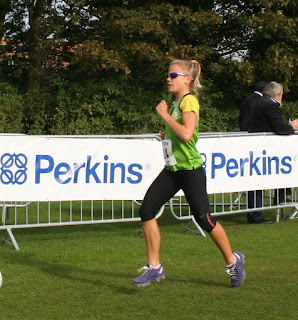 In this year's Peterborough Half Marathon sponsored by Perkins Abi Schofield led home over twenty members of Grantham Running Club in a club ladies record time of 1:25:21. The attached photograph shows Abi with a few metres to go at the finish. The large turnout from GRC to this popular local race produced a number of other performances with eleven other personal best's including Rob Howbrook taking almost ten minutes off his best time during the course of this year and Penny Hodges reducing hers by close to five.

In her first ever marathon GRC runner Gwenda Williams successfully completed the Yorkshire Marathon round York in a time of four hours, fifty three minutes and two seconds

Warren Stark led a trio of GRC runners home in this week's Newark Parkrun in a time of 21:58 with team mate Kevin Baker just 9 seconds behind him. First timer Laura Kettle finished in 26:14 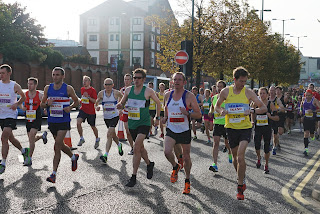 Grantham Running Club’s Matthew Kingston-Lee smashed his long standing PB and set a new club record when he finished 21st out of 7246 finishers at the Robin Hood (Nottingham) Half Marathon on Sunday 28th September 2014. Crossing the finish line in a time of 1:15:29 he bettered his old PB, set at Milton Keynes in 2010, by 1 minute 18 seconds, and bettered his old club record, set at Keyworth in December 2013, by 1 minute 32 seconds.
The fast, mostly flat course, is ideal for fast times. It was a still day, but sunny and unseasonably warm, with temperatures soon rising to 20 degrees Celsius and higher. This made the going tough in the closing stages of the half marathon and for much of the race for those electing to run the marathon.
Behind Matthew in the half marathon for Grantham Running Club, Stuart Sinclair had a fine run to break 90 minutes, clocking 1:29:36 to finish 259th. Suffering from injury it was a tough day for Wendy Tremain, who valiantly finished in 2:47:16, with husband Marc running alongside in support, who was credited with a 2:51:33 finishing time.
Opting to take part in the marathon, Scott Jones had a cracking run in less than ideal conditions to finish in 3:26:27 bettering his old PB, set earlier this year, also at Milton Keynes, by over 13 minutes, finishing a highly creditable 169th, with 1495 finishers.
The winner of the half marathon was Matthew Kimutai in 1:04:21; Gladys Kwambai the winning woman in 1:14:22. The marathon was won by Peter Capdevila in 2:28:33, with Kay Walsha the winning lady in 2:54:06.

Grantham Running Club A Team were thrilled to finish second in their category and fourth overall at Equinox 24, a 24 hour endurance race held on the Belvoir Castle Estate over the weekend of the 20th and 21st September.
Although only its second year, Equinox 24 has already established itself as one of the country’s most popular endurance events. Competitors try to complete as many laps of the approximately 10km multi-terrain course as possible from Midday on the Saturday through to Midday on the Sunday. Entrants could choose whether to compete solo, or as pairs, or small or large teams. Grantham Running Club entered two large mixed sex teams, each comprising eight runners.
Conditions were initially good for the early laps of the race, but those running through the night were hampered initially by rain and then by mist, with only head torches to help navigate through the darkness. Thankfully come dawn the mist cleared and runners enjoyed a sunny conclusion to the race.
Grantham Running Club A Team, comprising: Jeremy Page; Stuart Sinclair; Mark Wilson; Gerry Hyde; Rob Howbrook; Matthew Kingston-Lee; Holly Durham; and Ben Mason, overcame the challenging course and night time conditions, sleep deprivation, numerous injuries, and general fatigue to complete 33 laps (approximately 190 miles), finishing second in the Large Team Category behind overall winners Stilton Striders Team A, who amassed an impressive 35 laps.
Grantham Running Club B Team, comprising: Mark Hillson; Marc Tremain; Gordon Geach; Sarah High; John Bainbridge; Helen Brown; Sam Bainbridge; and Catherine Payne, performed equally admirably to finish eighth in the Large Team Category, completing 29 laps and ending up just 25 seconds behind the seventh placed finishers.
There were 46 large teams taking part in the race; 37 small teams; 12 pairs; 25 solo females and 49 solo males. The winning small team (the all-female Har-Kiss Honeys) completed 34 laps; the best pairs (RAF Lossiemouth A) completed 26 laps; Kate Jayden was the winning solo lady with seventeen laps; and Steve Salter was the winning male with 20 laps (over 115 miles) covered in 24 hours. 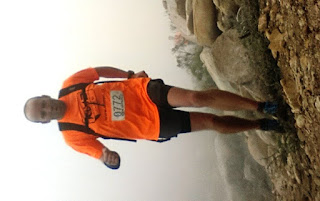 Grantham Running Club’s Paul Rushworth (picture enclosed) continued his running tour through South America with this mountain epic in Chile last Saturday. In a straight climb of over 7,200’ to the summit Paul had to cope with his fingers swelling as well as the lower oxygen levels at altitude. Despite this he finished in 28th place in the full marathon in a time of 4:49:38

This coastal race along the seafront at Mablethorpe attracted GRC runners Catherine Payne and Robert McArdle. Catherine was rewarded for her trip to the coast with a personal best of 42:40 and first prize in her age category with Robert McArdle claiming a season’s best of 45:28

Grantham Running Club had the first male and female finishers at Newark parkrun #68 on Saturday 13th September. As part of an 18 mile long training run, GRC's Matthew Kingston-Lee worked his way to the front of the field approximately five minutes into the five km timed run. He pulled away to come home in 17:58, six seconds outside his course PB and 40 seconds ahead of the second placed finisher.  Finishing first lady, Penny Hodges bettered her old PB set in August by three seconds, clocking 22:23. Further down the field, Louise and Nick Payne made a family occasion of it with their daughter coming home well outside their bests in 38:00 and 38:01 respectively.

Warren Stark of GRC set a new fastest time for this distance with his first visit to the Kings Lynn event with a time of 21:12 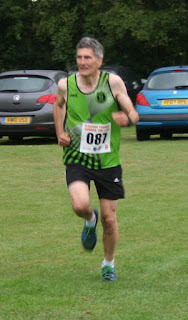 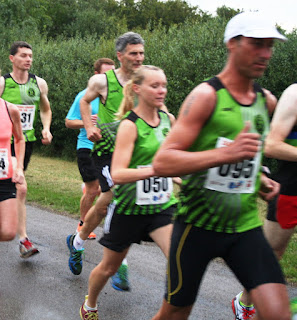 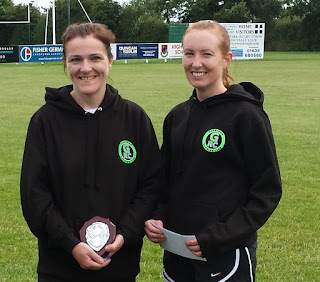 Andrew Pask lowered his PB by almost 90 seconds over this course round Orton in Peterborough and was closely followed by Abi Schofield also enjoying a great season who was third lady to cross the line. Another GRC member in good form, Yvonne Taylor set a season’s best. Full results;

Two GRC runners made the short trip to Rutland to take part in this six mile road race on an undulating course round Stapleford Park. Dean Riggall finished in the top 25 with a time of 41:19 with teammate Gwenda Williams finishing in 59:10

In this week’s Parkrun both of GRC’s men gave good accounts of themselves with Rob Howbrook finishing just a few seconds outside his already impressive PB in 20:59 and Andrew MacAllister setting a new best time of 25:15 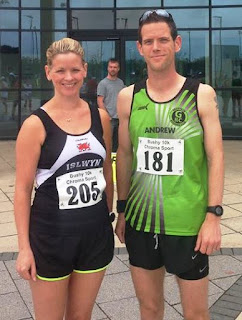 Here is a photo of GRC's Andrew Pask with his sister Louise at the Bushy 10k on Sunday. Welsh born Andrew came to Grantham with the RAF and found inspiration to run his best ever time on Sunday from the visit from his elder sister seen here wearing the colours of the Islwyn club from his native Wales. 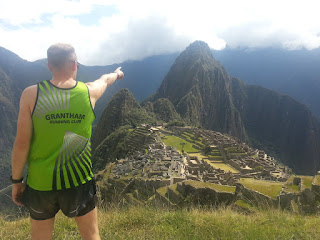 Grantham Running Club's Paul Rushworth started the first leg of his world tour with a high altitude run in Peru along the Inca Trail, to reduce the nausea Paul had to chew coco leaves to keep him going through the higher passes. The next stop on his trip is the Colca Canyon in the South of the country for an attempt at the course record. 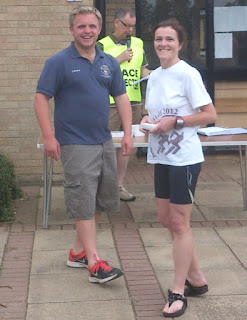 GRC's Catherine Payne picked up the medal as third lady in this 10k race in South Lincolnshire in a time of 43:52 with teammate Robert McArdle finishing in 46:59

This week saw three PBs from the GRC runners at Newark.