On a torrential Sunday 31st October, 5 runners from Grantham Running Club raced in the Worksop Halloween Half marathon. Battling the rain and wading through multiple puddles straddling the course. Gav Meadows was first in for Grantham in 95  minutes and 46 seconds, improving by over a minute on his time for the Cambridge Half two weeks earlier. Next Peter Bonner came home in 98 minutes and 57 seconds his first half marathon since February 2020. Catherine Payne was the first woman back for GRC in 103 minutes and 31 seconds; winning her age category with an impressive age graded score of 77.0%. Craig Drury completed the course in 108 minutes and 4 seconds, with an age graded score of 60.92%. Caroline Davis, who ran the course in fancy dress, in a time of 112 minutes and 52 seconds came in with an age grading of 66.9%. This is her 5th time running this race and her 4th in ghoulish fancy dress. It was a well organised event and despite the weather the atmosphere was brilliant. 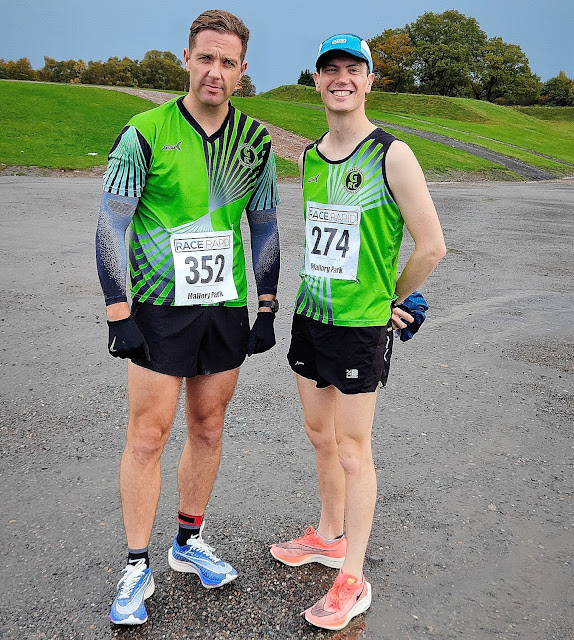 An in-form duo of Aaron Smith and Samuel Jepson-Rivers made the hour plus trip to the famous racecourse with hopes of a good time on the fast course.The race entrants were split into two race times, a departure from the small group multi ‘wave’ starts that have coloured previous incarnations of events held over the past 12 months or so.

GRC twosome started the day a little downbeat in attitude and expectation in response to the howling gales and driving rain that had beset the East Midlands since sunrise.Miraculously, as if ordained by a higher power, blue skies and a welcome gap in the winds coincided with the warmup and race to provided Aaron and Sam near perfect running conditions, if a little moist underfoot.

Electing to attack from the start, Sam’s tactics paid rich dividends as he finished in 3rd place in the 1100 start. Clocking 17:54 he was justly chuffed with his work. He also bettered his previous PB by over 30 seconds and chalked up an age grading of 72.63%.

Taking the excellent recent form of the last few months and multi distance race success of late, Aaron suffered a minor setback in the final moments before the gun, having a watch malfunction!

It needn’t have mattered, his mature pacing once again coming to the fore as he cast aside his hitherto previous 5k PB of 19:10 (set almost exactly a year ago at the same venue) to bust not only 19 minutes but slaying it emphatically. Clocking 18:31 he too was justifiably pleased with his effort. 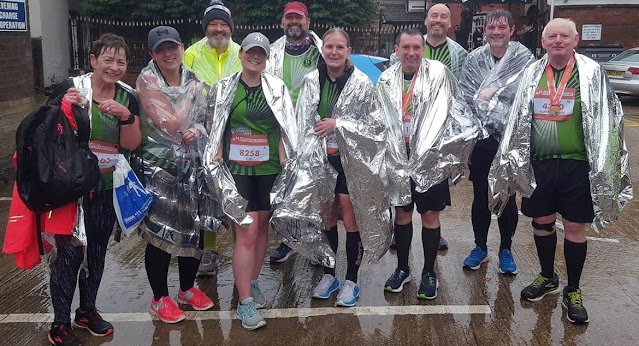 Featuring in Grantham Running Club's Grand Prix race series, representation from the Green Army was high with 46 members of the club taking part. The forecast of wet weather proved to be an understatement with most of the race being run in a torrential downpour. The spirits of the 2,700 participants didn't appear to be dampened and at 10am prompt, the race was underway

Starting out on Riseholme Road and finishing in the grounds of stunning Lincoln Cathedral, the course is renowned for being fast and flat with great PB potential.

Taking advantage of this, or maybe just trying to get away from the deluge of heavy rain as fast as possible, an impressive number of club members secured their personal best times.

First home for GRC, and continuing his fine form, was Joe Diggins setting a new PB of 36:54 and taking around 4 minutes off his previous best followed by Alex Curtis on his first ever 10k in 38:15. Next up for a PB was Robin Atter who was taking part in the Lincoln race for the first time and finished in an impressive 40:14.

Jason Walker, Sam Dodwell and Stewart Pick all finished within a couple of minutes of each other claiming PB times of 41:21, 41:57 and 43:09 respectively.

Robert Howbrook won his category a time of 41:57 and an amazing age grading of just under 82% and Nik Parkin shaved a solid 2 minutes from his previous best clocking in at 44:46.

Anthony Boyle put in a very strong performance to dip below the 50-minute mark for the first time, finishing in 49:40, a fraction off 2 minutes from his previous best. Julie Gilbert returned to Lincoln 10 years after her first real competitive run there and shaved a massive 12 minutes from her original course time and 4 minutes off her PB to come in at 51:37

John Nevard and Kate Marshall were the next two club members over the line to record a PB with John claiming an unexpected 51:20 and Kate taking a minute off her previous time finishing in 56:22.Marj Spendlow was a graduate of the GRC Beginning to Run program and in her first 10K race recorded an impressive finish time of 56:29. Also great to see two other graduates, Joni Goodband and Holly Wragg completing their first official 10K race. Not far behind Marj was Emma Duncan squeezing in a new PB of 56:59.

Stephen Fay was the next club member to join the PB gang finishing in 57:52 with Wendy Fraser, who has only recently returned to running, finishing in 1:02:35 bring the PB number to sweet 16.

Big thanks to all the supporters on the route who stood around in such awful conditions to cheer everyone on. Great support from all the marshals out on the course too but biggest kudos to everyone that took part whether it was a personal best, season best or a Sunday best.

Aside from the atrocious weather conditions which became what can only be described as biblical as the morning progressed, it put paid to the usual post-race club photo shoot.In typical British weather style, as everyone headed away from the event wrapped up like Christmas turkeys in their foil blankets, the sun came out as if to say, "see you all next year".

The race was won by Ronny Wilson of Lincoln Wellington Athletic Club in a time of 30:18