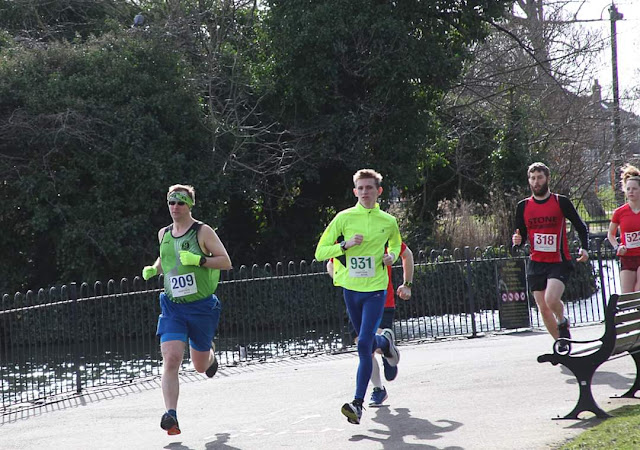 Taking advantage of an extra day in the year which happened to be a Saturday, two runners from New Marske Harriers set up a one-off race over the rarely-run distance of 6K. Grantham Running Club’s Peter Bonner took part in the Leap Year Trot charity event for SeeAbility (The Royal School for the Blind), which took place in Albert Park, Middlesbrough.

The course utlilised the traffic-free paths inside the perimeter of the park, using the same route as the two lap weekly parkrun, except running three laps anti-clockwise to finish at the visitors’ centre. To ensure the exact distance, the start was a few metres away from the finish.

The windy conditions combined with the slight hills in the park to leave the odd kilometres noticeably slower than the even ones. Many of the participants chose to enjoy the race rather than race at full speed. This lack of competitiveness gave a very friendly feel to the race, with lots of support from the marshals and other runners on different laps.
The race was chip-timed, but unfortunately suffered from computer issues which delayed the start. The lack of experience from the Race Director showed at this point, leaving the runners shivering on the start line rather than communicating early and allowing people to wait inside. Once the race started however, everything went smoothly.

The race was won by Keith Bindoff of Middlesbrough & Cleveland Harriers in 22:49 with GRC’s Peter finishing second in 23:36, with Michael Meggs third. Both Keith and Peter had run parkrun earlier that day, with Keith having been round Albert Park in the opposite direction in 19:11 whilst Peter had a much more scenic jog round the quays on the Tees Barrage parkrun. The first female home was Isobel Nicholls, an U15 runner from the City of York AC. She was recovering from illness but still managed 26:29. There were 66 finishers, all completing in under an hour and with an average finish time of 37½ minutes.

The goody bag after the event included a stamped medal, food and drink, a Middlesbrough FC pencil and some cooling foot lotion. Speaking afterwards Peter said that he really enjoyed the race and would do any future events in that series, though would prefer it to have been a little closer to home.
Posted by GRC at 29.2.20 No comments: 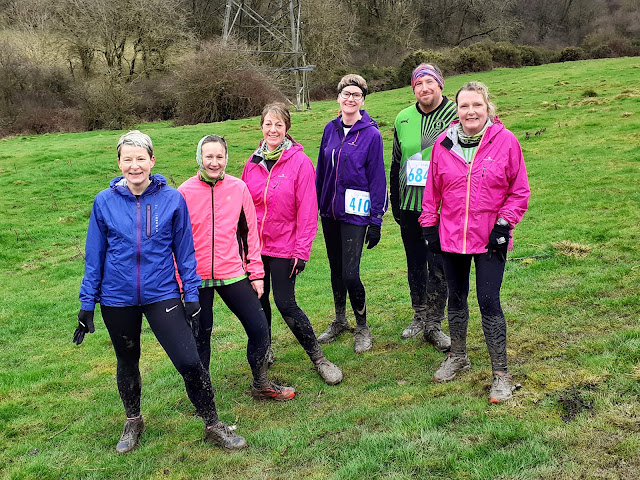 A memorable 2020 Belvoir Challenge, held on Saturday 29th February, certainly lived up to its moniker as an intrepid group of 33 members from Grantham Running Club braved the elements to complete the undulating, mostly cross country race, remarkably with all footwear present and correct, despite almost knee-deep mud in places!

Starting and finishing in Harby village, both the 15 and 26 mile routes followed footpaths, byways, tracks and minor roads through the beautiful Vale of Belvoir, and with the kind permission of the Duke of Rutland, included land in the Belvoir Estate. Annual variations to the routes ensure variety for returning participants.

Organised by the parents and friends of children attending Harby Primary School, the popular and well-supported event raises funds for the school's extra-curricular activities. Runners need not fear running out of energy on the challenging route, as the event is famed for its well-stocked rest stops, with participants enjoying copious quantities of cake and sandwiches en route and much-welcomed hot food served at the finish.

Extensive wet and stormy weather for the best part of six months had left ground waterlogged, meaning that the going was soft and significant parts of the course were the muddiest ever encountered by repeat visitors to the race. Moreover fickle weather conditions meant participants battled through four seasons in one day, enduring everything from wind, rain and even hail showers, tempered only by glimpses of winter sunshine.

After a false start, the race finally got under way and it was Phil Devine who was the first GRC finisher, coming home fourth overall in the 15 mile event in an extremely impressive 1:59:32. Phil enjoyed the race, although noted that some vague course markings had nearly sent him off route in the closing stages of the race. In an act of great sportsmanship Phil actually waited for the third place runner to return to the course having headed in the wrong direction, only returning to the correct path thanks to Phil’s verbal intervention.

Dean Riggall was next home for the club with a very respectable time of 2:08:29, which earned him fifteenth position. Paul Rushworth was third GRC male home, completing the 15 mile route in 3:02:59.

First woman home for GRC was Claudette Joint, who ran well in the muddy conditions to clock 3:09:51. Sinead McDonnell was the next GRC female to finish, doing so in 3:42:54, with Claire Martin following in 3:57:22.

Five brave GRC runners braved the multiple miles of mud to complete the 26 mile course. Caroline Davis was first home for the club, finishing in a time of 5:37:18. Mark Hillson followed in 6:21:10, closely followed by Sarah High in 6:21:26. Hayley Staff enjoyed the experience, despite the conditions, to finish in 7:03:51 with Justyna Gill doing well to complete a very tough course in 8:54:07.

Even though the muddy course and changeable weather made for a demanding race, many participants commented that it had been an enjoyable, friendly and sociable event, with much positive comment on the organisation and support from marshals. Although for many there was not much running to be had, so tough were the conditions, the excellent refreshments were much applauded. Most said they would enter again in the future, albeit hoping for kinder conditions!

Also completing the 15 mile event for GRC were: 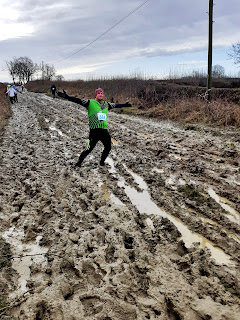 Taking place a week after Storm Dennis forced its postponement, thirty seven members of Grantham Running Club successfully completed the St Valentine’s Stamford 30K on Sunday 23rd February - the second round of the 2020 GRC Grand Prix Series. The popular pre-marathon training race is considered a real test of form and character with virtually no flat terrain on a constantly undulating course. Considering the logistical difficulties associated with a postponement the hosts Stamford Striders did a fantastic job to put on another superbly organized edition of the race.

Heavy early morning rain and blustery strong winds threatened a repeat of the conditions that led to the race’s postponement; thankfully though the rain passed through to reveal partially blue skies and pleasant racing temperatures for much of the race. Despite fears over flooding on the course the only really large puddle was circumnavigated by the field early on in the race and the somewhat wet and muddy section along Salters Lane was arguably not as grim as in previous years. The strong winds remained for the entirety of the race however. Although there were some tough sections of headwind runners did enjoy an extended section in the second half of the race with a favourable cross / tail wind. The infamous finish on the Welland Academy playing fields did though feature a brutal headwind to the finish line that saw some runners almost stopped in their tracks!

First home for Grantham Running Club was Matthew Kingston-Lee. After successfully practicing his marathon start procedure over the opening three miles, Matthew ran a controlled race that saw him gauge his effort a little under what he hopes to run at the forthcoming London Marathon. Making his way through the field, first he first passed Chris Limmer, who was very pleased with his ‘run to feel’ 35th placed 2:00:59 finish, and then 24th placed Jonny Palmer who finished fifteen seconds inside his 30K PB with 1:57:12 feeling in his legs the effects (like quite a few in the field) of a tough National Cross Country Championships race the previous day. Running the second half of the race a minute quicker than the first, Matthew was pleased to finish 20th in 1:55:53, breaking the old 30K club record by thirteen minutes.

Following Chris home with arguably the performance of the day was Joe Diggins, who despite finding the course ‘brutal in places’ stormed around to smash his 2019 30K PB by just shy of fifteen minutes, clocking 2:10:20 – the seventh best performance over 30K by a runner in a GRC vest. Given the average pace for this performance is not far shy of his half marathon PB, it’s reasonable to assume his marathon PB of 3:52:40 could be seriously revised if all things continue to go well this spring.

Leading the way home for the GRC ladies was the ever impressive Catherine Payne who, with 2:21:05, was just fifteen seconds outside her 2017 PB performance and scored the highest ever GRC age grade for this distance with 82.06%. Her efforts earned her 16th lady overall and second place in her age category. A couple of minutes behind Catherine, Holly Durham (18th) ran well to better her 2019 time by over two minutes with 2:23:23to also be runner up in her age group and Sarah Chynoweth put in a solid performance in her 30K debut having completed in the National XC Champs the day before to finish in 2:30:53. 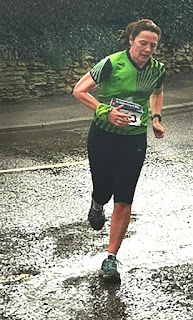 The race was won by William Strangeway of Lincoln Wellington AC in 1:41:31 with Samantha Cullen of Eye Community Runners the winning woman in 2:04:12. There were 561 finishers.
GRC Results:
Posted by GRC at 23.2.20 No comments: