On Sunday three members of Grantham Running Club participated in the 7th annual Brass Monkey 10k race in support of Lakelands Hospice, Corby held at Rockingham Motor Speedway in Northamptonshire. In warmer than expected temperatures and under a blue sky (at times) any hope of personal bests was soon dashed due to the high winds in the exposed location. There was a large turnout of over 550 runners and some wheelchair racers for this event around the banked speedway circuit. Travelling at somewhat less than the lap record of 215mph Stuart Baty came home in 134th place in a time of 50:44 with Simon Hartley finishing in 62:29 and Lucinda Gamble finishing in 68:50. All three were members of last year’s very popular and successful 10 weeks to 10k programme run by Grantham Running Club and have participated in a number of events since their graduation

A total of ten members of Grantham Running Club took to the starting line at the Folksworth 15 on Sunday. The fifteen mile road race, which is organised by Yaxley Runners and Joggers, is the first of three races regularly used by local athletes to prepare for a spring marathon. The course is an undulating two laps, starting in Folksworth village and passing through the villages of Morborne and Caldecote.

An unexpected deterioration of the weather just before the 11:00 start almost led to its cancellation but after consulting those at the registration desk the Race Director reluctantly decided it was safer to let the race go ahead as many of the runners intended to run it regardless and his reasoning was it was safer to do it with the marshals and medical personnel in place. By the time runners started their second lap the wind had picked up significantly meaning a brutal and very chilly headwind on the long, gradual climb out of Morborne. He also contemplated bringing them in after the first lap but reckoned most of them would just try and finish the race anyway!
The weather conditions meant PB's would be hard to come by and most runners would end up a few minutes slower than in previous years. It was snowing at the start and things only got worse from there.
First to finish for GRC was Andrew Pask crossing the line in 50th position overall. He recorded a time of 1:45:39 - very impressive indeed given the conditions. Closely following was Gav Meadows who had led the way for GRC until the extremely tough second Morborne hill climb took its toll. He clocked 1:45:56 and placed 52nd overall. Both runners averaged a few seconds over 7 minutes per mile - close to the pace they hope to maintain at the Rotterdam Marathon in April.
Next to finish was Peter Bonner who had an eventful race to say the least. He suffered a nasty fall after overcooking it on a downhill section early in the race but despite this he still managed to knock over five minutes off his PB. It was only after he was accosted by the medics at the finish line he realised the extent of his injures being unable to feel any pain due to the cold.

Exactly two minutes behind Peter was Catherine Payne finishing first in her age category and 13th lady with a time 1:51:59, some 45 seconds behind the time that secured her the prize last year. Robert McArdle returning to long races after a nine month injury lay off with an ankle injury and was relatively pleased with his worst time ever on this course as he did not suffer any ill effects from the distance. Mark Hillson was next to finish, as he continued his preparations for the London Marathon, with a solid 2:03:05, followed by Penny Hodges (2:05:18) who placed 7th in the Female Veteran 35 category.
All three remaining runners produced creditable performances on a day when just getting over the finish line was an achievement. Caroline Davis put her recent injury concerns behind her posting a time of 2:15:32.  GRC's two club entrants to the London Marathon were next home Liam Vincent clocked 2:17:36 despite feeling under the weather before the race. Gordon Geach was the final GRC runner home in 2:34:23 and made no secret of the fact that he hadn’t enjoyed the conditions at all but after the cancellation of the Turkey Trot everyone was glad to be racing again.


Grantham Running Club's Paul Rushworth travelled to Helsby near Chester to take part in the Four Villages Half Marathon on Sunday 21st January. The race visited Dunham-on-the-Hill, Mouldsworth and Manley before returning to Helsby along quiet country lanes. This year's event was run in extreme conditions with wintery Sleet showers blowing across the course for the duration of the event. Despite the tough conditions, Paul finished in a creditable 1:35:50 minutes making full use of the final three mile steady downhill sections to increase his speed to the finish. Paul also took the opportunity to introduce the new arrival in his family to the world of running. 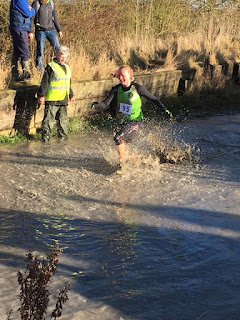 Several members of Grantham Running Club took part in the Lincolnshire Cross Country Championships which took place on Sunday 7th January at Castle Dyke Equestrian Centre near Boston. Although a flat course it was chilly and blustery with the teams up against 'real' cross country conditions - plenty of mud and a water crossing which the ladies had to cross three times and the men four. For some there was also the bonus of receiving an electric shock as they attempted to remain upright in the mud and grabbed hold of the nearest thing - an electric fence! 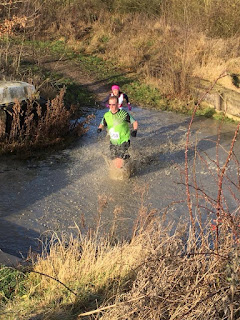 Despite the conditions Peter Bonner put in a strong performance to be the first GRC man home in 48.12, closely followed by Matthew Williamson. Chris Toon, Marc Tremain and Andrew MacAllister all ran a good race with the team finishing 9th overall.
For the ladies there were two teams entered. For the first team Holly Durham finished 11th overall in 31.08, followed by sister Penny in 18th (33:16) and Sarah High (34:16). They placed 3rd overall in the veteran ladies competition. The second team were led home by Andrea Ward in a time of 34.47, followed by Justyna Gill and, in her very first cross country event for the club, Lucinda Gamble.


Grantham Running Club's cross country captain Sarah High brought the cross country season to a triumphant conclusion by winning her overall age category for this year's competition. GRC were represented by a strong team on a technical and testing course at the fourth and final fixture of the North Midlands Cross Country League which took place at Wollaton Park, Nottingham. Sarah lead home the ladies team with Caroline Davis, who was donning her spikes for the first time after injury, closely followed by Nicola Cottam, who had competed in all four races in this seasons league.

In the longer men's race veteran Rob Howbrook was the first man home just ahead of the fast finishing Peter Bonner, who like Daniel Howson and Kevin Kettle had also chalked up all four races. Other finishers in order were Chris Toon and Andrew MacAllister.