Sunday saw the inaugural running, in aid of the Soldiers' Benevolent Fund, of this 10k run around Dishforth airfield.

Peter Bonner represented Grantham Running Club, with other Grantham runners being sensible enough not to get up so early after the clock change.

Travelling to the event was helped by a co-operative A1, which was fortunate because on arrival at the airfield it became apparent that an email had been missed, necessitating a drive around the roads to the other side and an access via an emergency gate from the A168. The directions and signage are likely to be reviewed for next year, judging by the two ambulances and a police car seen during the race, and the two smashed cars still at the scene when participants left.

Upon arrival, the race village was small but well organised, with several army tents making number collection easy, though the changing area which consisted of a 3 sided tent, open area facing towards all and sundry, might risk putting people on a Register. Toilets consisted of portaloos and were relatively few – a larger race would definitely have struggled.

The event started at the right time (1 minute late, but after the toilet queue had declined). The course was extremely well-planned, with the start and finish in the same place and consisting of two laps. The route was on flat and wide tarmac and was completely traffic-free, being all within the base. Both laps coincided for most of the first two kilometres, with the first lap following the perimeter road and the second lap taking a slightly shorter inside route via the runway. This meant that, although the faster runners finished whilst some were still on their first lap, the two groups were separated on opposite sides of a barrier and there was no risk of confusion. The course was led by, and tailed by, a support vehicle.

The weather, for once, was perfect, sunny, with relatively light winds and not too warm, and no trace of the previous week's snow. The bling afterwards consisted of a medal, a canvas shopping bag and various charity items including a pack of cards and a pin badge.
On this fast course, Peter was very pleased to complete a new personal best of 40:43, finishing 38th out of 338. Next year, he recommends it for anyone who is willing to go to bed early on Saturday and who isn't doing a Spring marathon. 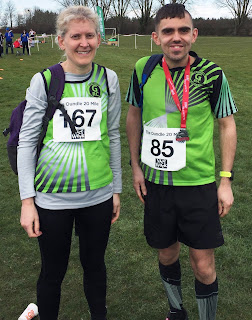 Grantham Running Club’s Matthew Williamson and Caroline Davis took part in the inaugural Oundle 20 Mile NAD Road Race on Sunday. The event was originally scheduled to take place 3 weeks before, but was one of the many casualties of the weather & was postponed. It’s ideal for those training for a spring marathon and follows a scenic course around the gently undulating country lanes in and around the pretty Norhamptonshire villages of Fotheringay, Nassington, Yarwell and King’s Cliffe.
Matthew, who is training for the Manchester Marathon, finished in 2:34:45. He didn’t race flat out as his big day was only 2 weeks away. Nevertheless, this was still a very respectable result indeed. This was his first ever approximately
20 mile road race.
Also training for Manchester, Caroline crossed the line in 3:04:03 which was good enough for 4th place in the Female Veteran 45 category. She also took the sensible approach of using the event for training rather than racing & was 4 minutes slower than her personal best for the distance.


On Sunday 25th March, Grantham Running Club’s Lucinda Gamble took part in the first London Landmarks Half Marathon. It's been four years in the making. The event raised over £4 millon
for various charities. There were over 15000 participants with lots in fancy dress - some even dressed up as the landmarks. They were a few celebrities running the race, to name a couple Amanda Holden and Jenny Faulkner.
The race started in Pall Mall and headed through the city taking in all the different landmarks on the way and finishing in Whitehall just outside 10 Downing Street, where there were Pearly Kings & Queens and Chelsea Pensioners giving out the medals. There were supporters lining the streets all the way around the course, plus loads of entertainment. The weather was dry & overcast, brightening up later in the morning.
In her 5th attempt at the half marathon distance, Lucinda produced a solid time of 2:30:29. Not her fastest but that wasn’t the main objective for this race. She was running on behalf of The Stroke Association in memory of her late Uncle Arthur who passed away in June from a terrible stroke. She said ‘I would like to take this opportunity to say a big thank you to everyone who donated to this great cause. Once I've collected all the monies I will have raised £600’.


On Sunday 25th March, 3 members of Grantham Running Club travelled to Rushcliffe Country Park for the rescheduled Rushcliffe Park 10K. Having previously been postponed along with several other events due to an untimely visit from the "Beast from the East", the runners were treated to a surprisingly warm spring morning for their outing. With it being the first "warm" race of the season, some competitors found the change in temperatures challenging, although the runners enjoyed being able to run in shorts and club colours again following the recent spells of bad weather and various cancelled/postponed events.
Runners from the club commented that the course was lovely and scenic and well marshalled, although there was some difficulty to get up to pace with a lot of the competitors being tightly grouped during the first lap of the two lap course. First home for GRC was Stuart Baty in a time of 50:08, followed closely by Martin Carter at 51:09 and Simon Hartley finishing in 1:04:57.