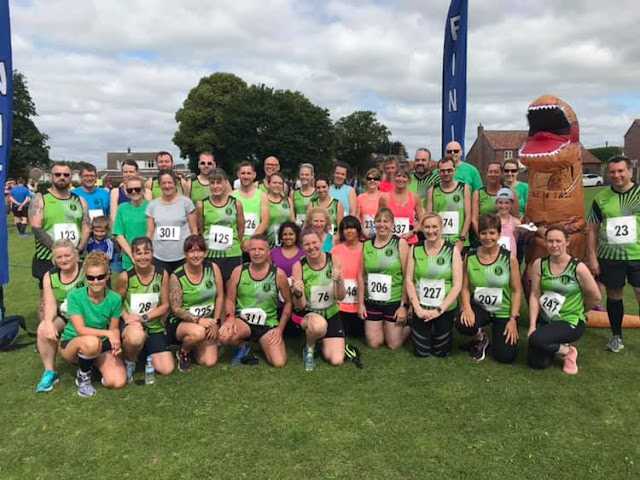 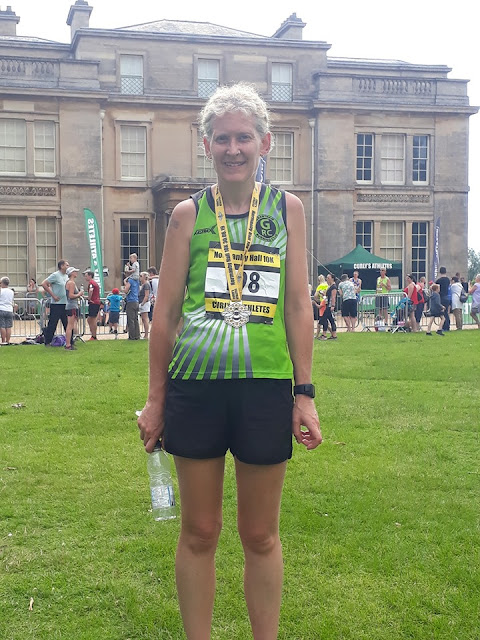 Two of GRC's veteran runners joined 63 others for round 2 of the The Nottingham 5k Summer Series and were rewarded with a prize each! Afterwards Tommy said "Both of us bagged our fastest 5k times this year . Caroline winning her age cat...in a cracking 24.03 and I won my age cat...23.43. Wine and chocolates certainly makes the round trip a little more pleasant to Colwick park in Notts".


Round 3 takes place on 24th July and is £12 for entry on the day, this race does not have a UKA road license and will not appear on Power of Ten as a PB
Posted by GRC at 26.6.19 No comments: 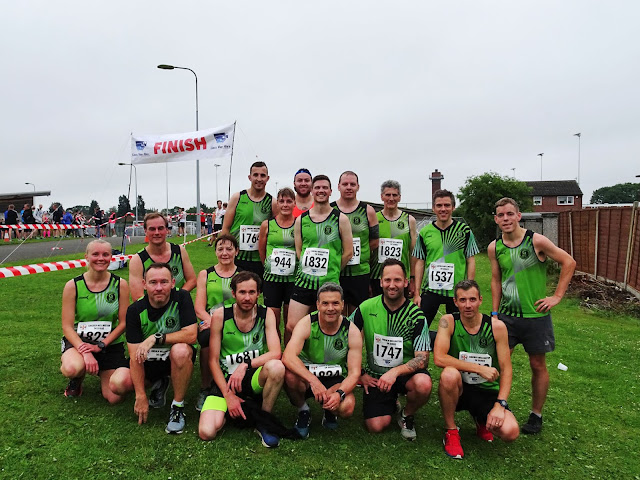 The second race of the Lincoln Wellington AC 5K Series, held on Tuesday 25th June, saw another impressive turnout of sixteen runners for the low-cost, no-thrills, multi-lap race held on the footpaths around the LWAC HQ at the Yarborough Leisure Centre in Lincoln. After a day of heavy rain that finally relented three hours or so before the 7:30 race start, heavy cloud cover and cool temperatures provided very good conditions for running, with only a light to moderate breeze hindering progress over certain sections of the course.
Matthew Kingston-Lee and Chris Limmer, the first two finishers for GRC, went into the race decidedly downbeat over their prospects but both came away very happy with their unexpectedly strong performances. Matthew eased himself into the race with a moderately steady opening mile and then accelerated prog
ressively over the course of the race, making full use of drafting behind groups of runners in the headwind sections as he worked his way up through the field. With a final sprint to the line Matthew clocked 16:54: eighteenth overall, third V40, and delighted to have broken 17 minutes for only the fourth time in running six seconds quicker than the opening race in May.

Chris Limmer, who is beginning to reap the benefits of the preparation put into running May’s Thames Path 100 mile long race, was on the heels of Matthew for much of the race and only dropped back when Matthew accelerated in the closing stages. His time of 17:22 was fourteen seconds quicker than his May effort at Lincoln and his quickest 5K time in five years. Ahead of Matthew for the opening small lap of the race was Joaquim Jeronimo, who opted for the ‘go out hard and hang on as best you can’ strategy. Although this predictably saw ‘Flash’ slow steadily over the course of the race, he showed considerable determination to control the fade in the closing kilometre to finish in an excellent 18:05 – 23 seconds quicker than the PB he set in the opening race of the series and with the same finishing position of 36th.
Rob Howbrook who, as in the May race, took part in the preceding Memory Mile, where he matched his time of 5:38, couldn’t quite match his outstanding 5K performance a month earlier where he broke his PB, but his time of 19:10 was still good enough to comfortably come first in the V60 age category. Peter Bonner, who had a great Memory Mile run, finishing fifth in 5:22, bettering his May time by 18 seconds and setting a new fledgling club record, finished the 5K very close to Rob in 19:13, 23 seconds down on his 5K PB set at Eye in the ARC sanctioned race in June.
Andy Atter, who is in the opening stages of preparation for the Chester Marathon in October, was pleased to better his official 5K PB by one second with 20:04, although he has broken 20 minutes on three occasions at parkruns. He was closely followed in 20:09 by a seemingly rejuvenated Jack Dodwell, who broke his 5K PB by an impressive 56 seconds just a month after running 21:06 at the May LWAC 5K.
Another runner who went home from Lincoln very happy having arrived with low expectations was Stefan Latter, who bettered his official 5K PB, set at May’s LWAC5K, by 25 seconds, clocking 20:25. Sam Jepson-Rivers was next to finish on his official 5K debut, clocking 20:39 half an hour or so after he had run 5:49 in the Memory Mile. Nick Rossington had also run the Memory Mile, bettering his May time by 22 seconds with 6:02. He was then nearly two minutes quicker than his May LWAC 5K time with 20:46, approaching his 2018 season’s best of 20:30. Nick was pushed hard to the finish by Sam Dodwell (20:48), who continued his impressive improvement over the course of the year, improving on his May LWAC 5K time by 36 seconds.
Holly Durham was next to finish, first of three GRC women to take part in the race. Having run the
Memory Mile in 6:24, Holly put in a solid performance to clock 21:07. Paul Kelly was another to clock a 5K PB, bettering his May LWAC 5K time by 23 seconds coming in at 21:59. In his first official 5K race Wayne Baxter ran well to clock 24:41, which is quicker than any parkrun he has completed this year and only 19 seconds off his best parkrun time, set at Rutland Water in 2018.

Completing the GRC contingency was Sarah High, who notched up a 5K PB on her Power of 10 profile, bettering her December 2018 time by over a minute with a fine 25:27, and Tracy Webb (28:12) who, two days after racing in Peterborough, ran well to finish just two seconds slower than she had at Lincoln a month earlier.
In an impressive display of depth and quality, hosts Lincoln Wellington AC all but dominated the top ten, with Joe Wilkinson leading the first of nine consecutive LWAC finishers with a time of 15:11. The club also won a quality women’s race courtesy of Abbie Donnelly finishing in 16:50. There were 156 finishers.
Posted by GRC at 25.6.19 No comments: 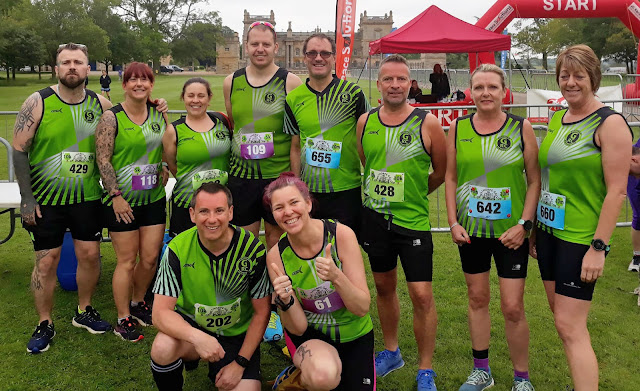 On Sunday June 23rd twelve members of Grantham Running Club made the short trip to Grimsthorpe Castle to take part in the third Grimsthorpe Gallop. As is typical of an SBR Events fixture, the event comprised a variety of different distances and disciplines held over a multi terrain course, ranging from 5K up to half marathon, some of which included a Canicross category and some open too to Nordic Walkers. With all races beginning and ending at the castle, the courses took competitors past various delights within the private grounds, such as a lake, tree lined tarmac avenues, ancient woodland, and a Victorian railway culvert.
Katie Bland was the solo GRC representative in the Half Marathon coming home in 2:02:49
The 10 mile race featured four GRC members. First home was Mark Edwards in 1:32:20, followed by Nicola Cottam (1:34:06), Vicki Ball (1:36:51), and Nicola Fahy in 1:53:43.
Three GRC runners took part in the next race – the 5K. Second overall was Sam Dodwell in 21:01. His first top three finish, he was awarded a trophy for his efforts. He was followed by Louise Kennedy in 34:36 with Samantha French finishing not too far behind in 35:27.
Four members of Grantham Running Club took part in the 10K – the final event of the day. Stuart Baty was the first GRC finisher in 56:22. Dale Towning (1:00:48) and Howard Rudder (1:08:04), two recent graduates of the club’s recent ‘10 Weeks to 10K’ programme, were next to finish with CJ Walker crossing the finish line in 1:22:42.

The male and female winners for each race are as follows: 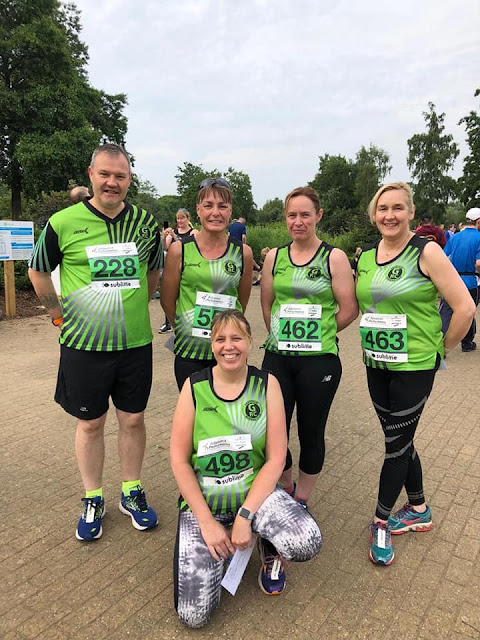 Five members of Grantham Running Club took part in the Ferry Meadows Midsummer 10K on Sunday 23rd June. The race began and ended in the the heart of Nene Park in Peterborough. Officially classified as a multi-terrain course, the run took place on a hard standing, mainly flat, course. Runners could take in the varied and beautiful landscape around the parkland on what turned out to be a very hot and humid hot day, which hampered some of the performances.

With experience of a 10 mile race at the same venue, Tracy Webb, who had taken part in the Long Bennington Summer Solstice 36 hours earlier, was the first GRC runner to cross the finish line in 1:02:11. She was followed by Neil Jameson (1:06:25) with Vicki Geeson coming home in 1:11:23, just ahead of Gillian Cardus (1:12:44), who had raced the day before. Amanda Mumby, who had the misfortune of suffering the twin effects of the heat and a headache, did well to finish in 1:13:04.
The Sublime Racing organised event was praised for its supportive marshals, great finishers’ t-shirt, medal, and goodie bag.  The race was won by David Hudson of BRJ Run and Tri in 33:35 with Rhiannon Baxter of Wreake Runners the winning female in 40:05. There were 623 finishers.
Posted by GRC at 23.6.19 No comments:

While Grantham Running Club’s attentions were focused on the Long Bennington Summer Solstice 10K on Friday 21st June, Tony Johnson was the sole GRC representative at the Notts 10 Mile Road Race, which took place on the same evening.
The race, which features two anticlockwise laps of the National Water Sports Centre rowing basin and surrounding roads in Holme Pierrepont, reverted to being held in June having moved to mid August in 2019. The race has developed an unfortunate knack of clashing with other local events that had already declared their race date. In 2019, as in 2016, it clashed with the Summer Solstice 10K having been staged on the same day as the Sleaford 10K in 2018.
It’s a pity that a race of such heritage, now in its 48th consecutive year, struggled to attract more than the 145 finishers, especially as the race winner Ben Connor of Derby AC with a time of 49:25 came very close to breaking the course record of 49:01 set way back in 1993 by Alan Jackson (Stourport) and the women’s winner was Great Britain international Gemma Steel of Charnwood AC in 57:41.
In his first 10 mile road race since the 2017 Notts 10, Tony was pleased with his time of 1:04:00 that earned him twentieth place overall and third V50 finisher. Unusually for a race held at Holme Pierrepont, conditions were ideal for racing, reasonably cool and just a slight headwind on the stretch on the furthest side of the lake.
Finishers were of the Notts 10 were rewarded with a bottle of beer from Nottingham Brewery for their efforts.
Posted by GRC at 21.6.19 No comments: