After a delay of exactly 18 months Grantham Running Club were finally able to stage their 11th 10k road race, this event was a much different affair from previous editions  not only because of Covid but

the cool foggy winter morning was a far cry from the balmy summer evening position it normally held in the calendar. This was the final time for outgoing Race Director Ben Mason the be in charge having originally signed up for three years he was only able to retire after one and a half times that having fulfilled his task not only to raise funds to help the club operate but in giving GRC the chance to be seen to be paying back the local running community by taking their turn to stage a top quality race.

One of the hardest working members of the Race Crew was treasurer Gordon Geach who had been liaising with the runners who entered in Spring 2020 and offering them the choice of carrying their entry forward or having a refund on two occasions and although the last minute concerns of the Omicron variant meant a flurry of last minute drop outs there were still over 550 hoping to start out of an initial target of around a thousand athletes. The reduction in the number of finishers neither lightened the load for the seventy odd GRC members turning up over the weekend to help out nor the joy at so many runners being able to compete of this classic course and end the year on a running high. Sam Jepson was not only the lead marshal but also the club’s fastest 10k runner this year who led by example giving up his chance of home glory for to make sure the race was staged safely. The fastest women in the club this year, Sarah Chynoweth turned down the certainty of a race win to help out with a road closure on the Junction of the A1. Although there were too many helpers to mention individually Vicki Ball was medical director, Paul Rushie

Rushworth for setting up and clearing down the course and finally Kate Marshall and her junior parkrun team who volunteered at the 9:00 event in Grantham and still managed to be in position for the race start on Long Bennington

The race was won by Elliot Smith-Rasmussen in a course record of 31:47 well clear of Marlon Dunkley of Rushcliff AC the runner up with Sleaford’s Alan Oliver just a few seconds further down the road. Anna-Marie Thompson also of Sleaford was first Lady 14 seconds clear of runner up Alison Dunphy of Eye Community Runners with the final place on the podium going to Shantelle Gaston-Hird.

First home for the home Club was Joe Diggins less concerned with clocking a PB of 36:02 than in getting back to continue helping out by welcome the other runners home with the usual goody bag of beer and cider as well as the Winter Bling. The current plan is for this race to return to its normal mid-summer date for 2022. The final round of the GRC Grand Prix series location was at Doddington Hall near to Lincoln for a 5k parkrun, so chosen as it is relatively flat, and some good times could be made for those wanting to either qualify for the series or better their existing times.

A misty morning saw eighteen determined club runners gather at Donnington Hall, wearing their familiar green and black club shirts line up ready for the off!

The run itself is a 2.5km out and back along a tarmacked path, half sheltered and half open with the advantage of a sloping decline at the start and the energy zapping incline at the turnaround point. The weather held as the 163 parkrunners, walkers, buggies and dogs were sent on their way for Doddington Hall’s thirtieth event.

Taking over two minutes off her previous time and finishing on 27:21 gave Kate Marshal a personal best at Doddington Hall. Another runner gaining a personal best at the same parkrun was Stephen Fay coming in on 27:45. Abigail Davis was the last family member home on 28:33.

Simon Hartley pushed home well on 28:48 and was rewarded with a Doddington Hall personal best   time. Christopher Limmer was slightly behind Simon on 28:58. Fraser Marshal went over the line on 29:49, with the ever colourful Samantha French finishing off the GRC contingent on 31:43 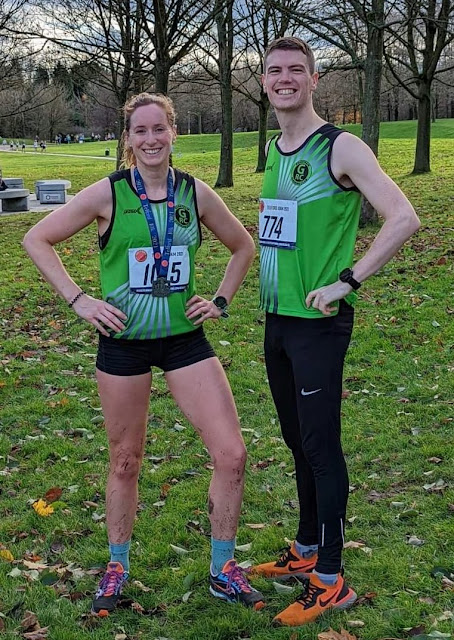 On Sunday 12th December, two members of GRC ventured across to Telford to take part in what boasts to be the 'statistically proven' fastest 10k course in the UK. A bold claim, but one that maybe has some genuine credence!

The largely flat course involved 2 tarmac laps in Telford Town Park, and attracted some of the UK's fastest road runners. Overnight rain left some puddles scattered throughout. But conditions for the day were as close to perfect you could hope for a December race - a balmy 12 degrees with very little wind.

Given the quality of the field it attracts and narrow sections of the course, Telford AC elect for a wave style start with three waves staggered throughout the morning.

First up for GRC was the constantly improving Sam Jepson, who had been targeting this as his key race of this year. Starting in the middle of a very strong field, Sam used the frenetic start to set off fast and kept getting faster as he put down a spectacular performance to clock 35:49!

While he was hoping for a PB, he crossed the line in shock having taken a 72 seconds off his previous fastest time - only set in October at Leeds Abbey Dash. It represented an age grading of 75.55% his highest to date.

The day was far from done as Sarah Chynoweth set about her own fantastic run.
Having focussed on longer distances this year, Sarah raced her first 10k in 2 years and was keen to see what she could do after a year of consistent running.

Going through the 5k mark at just under 20 minutes, she knew it would be very optimistic to make sub 40, but managed to cling on and cross the line in a respectable time of 40:18 - still setting a new PB – an improvement of 39 seconds compared to the Summer Solstice 10k of 2019. The race was won by Alfie Manthorpe of Sheffield & Deane AC in 29:06, and the first lady home was Samantha Harrison of Notts AC in 32:07.

Members of Grantham Running Club took part in a double whammy of cross-country last weekend.  First up on Saturday was fixture 3 of the North Midlands League which took place at Shipley Park in Heanor. With chilly, windy, and wet weather conditions, the testing course was very wet and muddy underfoot. Run around parkland with a few hilly sections and a short stretch through woodland, the event was a proper cross-country experience.

In the Ladies race Caroline Davis and Sarah High both put in strong runs in their 6k, 2 lap course with Caroline finishing 7th in her age group and Sarah 2nd in hers.

The men ran a 10K, 3 lap race in deteriorating weather conditions. The drizzle that had commenced at the start of the ladies race developed into a fully blown icy downpour.  Not put off, our chaps equipped themselves well against a strong, competitive field of 207 participants. The ever-impressive Rob Howbrook finished first for the team in 116th place, coming 4th in the V60 age group. In his first experience of racing in such challenging conditions Robin Atter came in second despite finding it tough. Chris Armstrong put in strong performance finishing third and was followed by a consistent Andrew MacAllister who brought the team home.

The great, supportive atmosphere between our club members and the continuing icy rain as we packed up afterwards topped off a 'proper' afternoon of cross country.

The combined efforts of the men has enabled the team to move up to 8th place overall in the league for male vets teams. Robin Atter is now currently 7th overall in the V40 age group.

On Sunday we were back for more as the club's cross-country stalwarts ventured North to Louth for the second fixture of the Lincolnshire League. Frequent showers on the journey up and on arrival cleared away to give brighter, drier weather. Caroline Davis and Sarah High again represented the ladies, running two and half laps of a really nice, purpose built cross country course with some technically challenging hilly, muddy switchbacks over a distance of 5.1K. Caroline finished in 16th place in time of 26.46 with Sarah following her in 17th place in 27.21.

For the men's team, Robin and Andrew were again in action accompanied Paul Davis. Having given themselves a motivational chat beforehand, all three put in strong performances with Robin leading the team home in 27th place in a time of 31.32. Paul demonstrated a return to cross country form over the 7K, three and a half lap course and finished in 35.54 in 39th place. Andrew brought the team home with his second fine run of the weekend in 37.14.

Thank you to everyone who participated in the cross country for the club over the weekend.  There will be more in January. 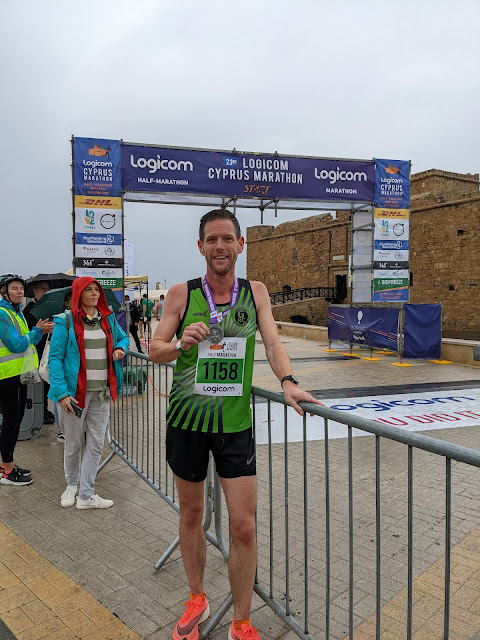 Whilst working in Cyprus, Grantham Running Club’s Andrew Pask made a short journey to the west coast holiday resort of Paphos to compete in the Cyprus Half Marathon. The event is part of the Cyprus Marathon weekend which included a variety of distances to suit any ability.

The start of the half marathon was anything but conventional. In the worst possible timing, an outrageous thunderstorm swept Paphos Harbour, flooding the start area and blowing much of the start infrastructure away. With runners taking shelter anywhere possible (including portaloos!!!) it was clear the start would have to be delayed. After a 15min delay and with the rain still falling heavily, the race director decided to start the race at 08:45. Thankfully, minutes after the start gun the rain eased and runners could return their focus on the race.

Starting towards the front in an obvious international field, Andrew settled into his race early. With two other runners, he was able to work off the group, happy that his effort was comfortably hard. After the first few miles along the coastal hotel road the course split into a couple of out ‘n’ back sections. Expecting the long climb at mile 7-8, Andrew was able to push hard down the other side heading back into Paphos.

Now working alone, Andrew maintained his effort for the last 5k towards the finish at Paphos Castle, crossing the line in 15th position with a time of 1:27:42. A race that will live long in the memory for sure!