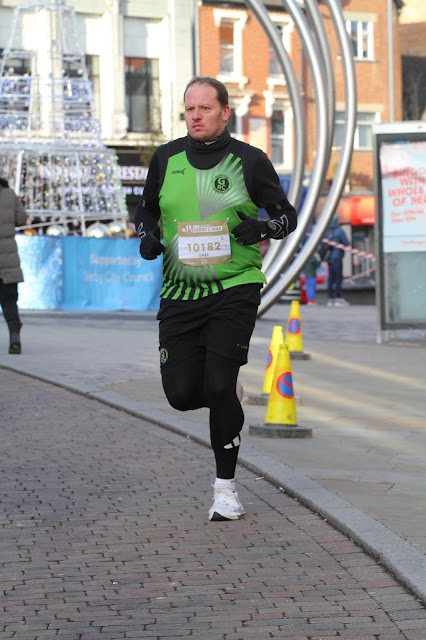 On a chilly Sunday morning with temperatures in the minus figures, Sam Dodwell was the sole representative for Grantham Running Club for the inaugural Ram 5 Mile race in Derby.

the city centres towards Derby County’s Pride Park Stadium at halfway and then heading back towards the City Centre, finishing where the journey began, at Iron Gate.

After only just recovering from isolating with Covid, Sam still went and attacked the race hoping to have some fitness left from recent races in October but even though he came away with a 11 second PB with a time of 35:06 which also put him in 12th place out of 179 runners, he was a little disappointed that without having the illness he knows he would have got a lot better time. 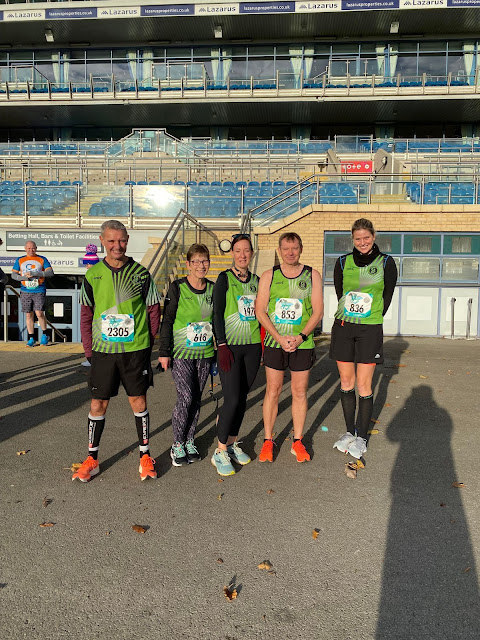 Eight members of GRC took part in the Doncaster 10k on Sunday 28 November and all put in sterling performances. Although it was a very chilly day fortified by a biting Northerly wind, mercifully storm Arwen had passed overnight leading to decent running conditions and the going was generally good!

The race started from Doncaster Racecourse and the runners were treated to a finish under the main Grandstand. First home for GRC was Peter Bonner in a solid 41:09, a thoroughbred of a runner coming 30th in his age category. Peter was pleased to achieve his best time for 2 years and is returning to fine form.

Next home was Alan Carley in a time of 42:19. Working his way back from injury Alan was pleased and somewhat surprised to comfortably beat his personal best which was previously set in 2019. Alan also came 5th in the 55-59 age category.

Next over the line was Stefan Latter who was rightly pleased with his time of 42:35, just managing to shave a one second off his PB, every second truly does count.  Next home was Christopher Armstrong (43:52) and Kevin Kettle (44:21) coming 10th and 11th in the 55-59 age category and both scoring high age grade scores.

GRC’s finest fillies on the day were Vicky Hardy and Sylv Hull who were just 2 seconds apart with Vicki winning by a nose. Both girls put in strong performances and were delighted to beat their previous PBs by huge margins.  Vicki posted 52:08 (a I minute 23 second improvement) and Sylv came home in 52:10 (a 2 minute 49 second improvement) and they came 30th and 32nd in their category.

Tracey Gell also put in a gutsy effort and was rewarded with a time of 1 hour 3 minutes and 24 seconds, another PB achieved on the day.There was a high turnout for this well organised race and GRC finished 21st in the team event.

All finishers were treated to a much needed and welcome hot chocolate and a pork pie- what more could you want? A deal clincher, we will return next year . 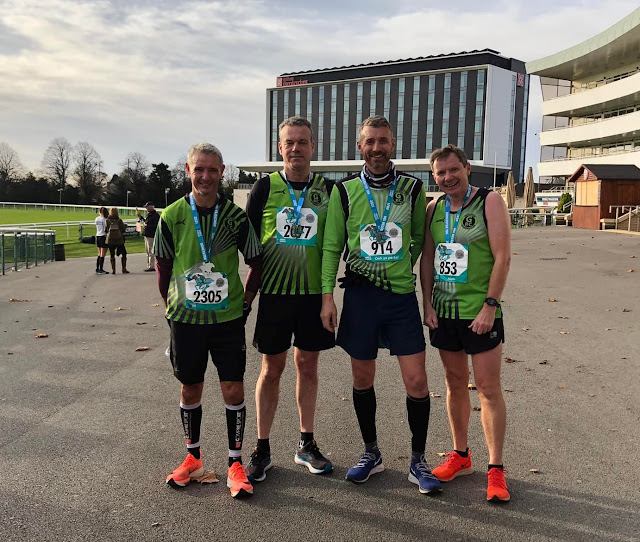 As the tail of Storm Arwen whipped its last across the country, two Grantham Running Club members joined the field of 715 runners for the Adnams Southwold 10k.  The rain stopped and the clouds parted moments before the start, but the bitter wind continued unabated, and the heavy overnight rainfall left two large sections of the 2 lap course littered with large deep puddles of icy water.

The race starts at the Southwold Harbour Inn, at the most distant point from the town itself, and the finish line.  The first kilometre is run along the very rough and wet harbour road, through the working harbour, past the huts and boats before turning on to the Shore Road, heading toward Southwold.  The route then turns left and up the hill to York Road before descending past the golf club back to the harbour, forming an almost 4km loop around the Town Marshes.

The race, as always, was very well supported by spectators and plenty of enthusiastic and encouraging volunteer marshals, especially in last 200m rise up to the finish outside the Red Lion.

Despite the conditions, the overall winner was Reuben Andrews of Bungay Black Dog RC in 32:59, less than a minute shy of the course record.  First female was Jo Andrews, of the same club in 38:31.

Two members of Grantham Running Club took part in the Edwinstowe Trail 10K on Sunday 28th November. The race, like many others, was cancelled last year due to the ongoing global pandemic with many participants choosing to transfer their entries to the 2021 event. The route utilises the undulating tracks and trails of Sherwood Forest and twice passes the imposing 800+ year old Major Oak. Conditions on the day were uncomfortably cold on the start line but pretty much ideal for racing once runners warmed up.

Gav Meadows was looking to build on a solid 41-minute road outing at the Friskney 10K Poppy Run 2 weeks previously. Unsure what to expect on the start line, he paced the first 4 miles conservatively averaging just over 7 minutes per mile. This was partly dictated by the undulating nature of the course. Luckily the last 2+ miles contained a lot of downhill allowing for a faster finish. Gav finished 16th overall in a field of 361 clocking 42:42. He said ‘Given the nature of the course, I’m pleased with how close I came to the time I ran on a flat road course 2 weeks ago.’

Rick Dobbs was looking for a controlled tempo run as he works his way back to full fitness after an achilles injury. Like Gav, he also opted for a cautious start, completing the first mile in just over 8 minutes. From there, he kept it fairly consistent throughout despite the course being far from flat. Rick snuck under the 50-minute barrier clocking 49:45 finishing 84th overall. He said ‘I enjoyed the variety offered by the course despite there being very little room to overtake in places. I’ll definitely be back to do this race again in the future.’

On a chilly November morning, 3 members of Grantham running club trundled over to Prestwold Hall in Loughborough for the Leicestershire 10k race.  For Phillip Crowcroft it was likely to be his last race of the year before the Christmas party season starts. It was rather chilly as he lined up at the start, though he quickly realised he had lined up in the wrong pace group and was soon the one getting in the way as everyone charged past him on the first hill. Ignoring this he plodded on and at halfway, a quick look at the watch told him he was on for a good time.  What didn't help was another runner gliding past, not even breaking sweat whilst juggling (yes juggling). With 2km to go a competitor with a loud watch ran past, letting everyone know how quick they were going. This stirred him on as he couldn't let this watch beat him. So he put the little legs into to overdrive and went for it, beating the watch on the line in a time of 47.18 for the 10km. This knocked 49 secs off his PB that stood for 2 years.

Also running fresh off the back of their performances at the rain-soaked Lincoln 10k were GRC newcomers Joni Goodband and Marj Spendlow.  Both runners bettered their 10k times and set PBs of 54:54 for Joni and 55:04 for Marj.