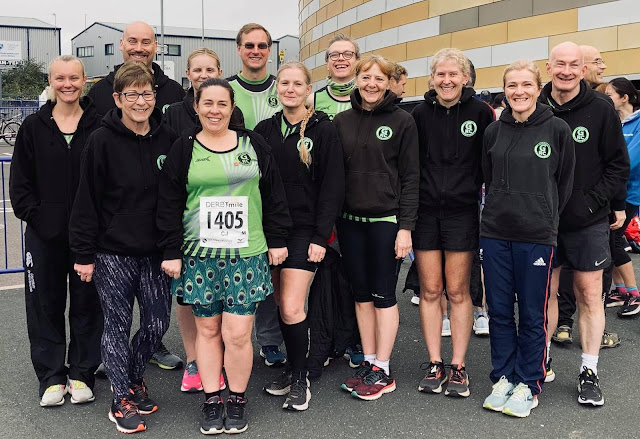 Grantham Running Club’s athletes were delighted to return to the classic and picturesque 10 mile course from the Derby Arena for the first time since 2018 with an alternative course replacing the flooded one in 2019 and 2020 being a victim of Covid. There were some spectacular performances by the returning runners with a handful of personal bests and a few runners making their debut at the distance. The day’s biggest improver was Louise Kennedy taking 17 minutes and 25 seconds of her previous
Derby time and setting a new PB of 1:53:03, another huge improvement was recorded by Kate Marshall over eight minutes off her previous mark on this course with a PB. Also recording Personal Bests were Caroline Davis with a near five minute improvement and Sara Pask, the former having represented GRC in a cross country event less than 24 hours earlier. Sam French was the final PB of the day with a 1:58:18. Another two runners from Saturday’s X/C race had great results with Peter Bonner setting a season’s best and Sarah High recording her fastest time for over eight years! Making their debuts at the distance were Craig Drury finishing disappointing a few seconds adrift of his target time as he learnt about how to pace this event but despite a hip injury Sinead McDonnel managed to keep her run respectable with a time just over the 90 minutes.

The other finishers were Holly Durham on her way back from a bout of Covid, Catherine Payne and Robert McArdle. Full results below;