Grantham Running Club had a bumper 42 athletes taking park in this weekend’s year late 24h Continental Thunder Run at its regular venue Catton Park, Walton-on-Trent. The Conti Thunder Run (affectionately “TR24”) is an off-road 10km relay race against the clock. It is renowned for being physically tough and mentally challenging to all competitors whether they’re running solo, in pairs, team of five or large teams of up to eight.Continuously run around the technically demanding cross country route from noon on Saturday through to noon on Sunday.

Flying the flag as GRC’s only solo runner, Caroline Davis kept moving throughout the entire 24hrs, completing an outstanding 13 laps, that’s an eyewatering 80 miles on this exhausting course. Beating her own target by a lap, Caroline just kept going. Her titanic effort was good enough to place her 7th lady solo runner in a strong field of 61!

Representing GRC in the club’s only team of 5, anchor man Matthew Williamson led them out with the team’s fastest lap of 44:22 which was his first lap of an impressive 6, despite battling with injury throughout. The team named Grantham Bling Quintet was completed with captain Robert McArdle, Catherine Payne, Paul Rushworth and Ben Mason who all completed a strong and consistent 5 laps to help the team to a record 6th place finish out of 71 other 5 person teams.

The remaining club runners were competing in larger teams of 8 runners. The fastest of these was simply called ‘Grantham Running Club A’ and proved to be deserving of that moniker. Captained by Sam Jepson-Rivers, they were initially Led off by TR24 rookie, Aaron Smith. He was followed by guest runners Rori Rodell and fastest lap runner Joe Clarke (41:58) the team were in a solid position from the early stages. Andrew Pask, Sarah High, Matthew Atter and Ben Hatherley completed the line-up in this competitive team. Averaging 49:45 despite the usual drop-off in pace during the night, the team remained competitive throughout. The final lap ran in by Ben Hatherley (pictured) with his teammates there to support him, the team finished in an all-time best 5th position of 146 teams and were 2 minutes shy of starting a 30 lap and securing 4th.

The 2nd strongest GRC team fielded named ‘Thunderballs’ – a nod to original captain Vicki Ball who had to withdraw days before the event due to Track & Trace. Led off by stand-in captain Sam Dodwell with their fastest lap time of 50:20, his first of 5 laps, the team was made up of only 7 runners, meaning they had much shorter rest periods than other larger teams. Team members Paul Davidson, Sylv Hull and Andrew McAllister were able to utilise their vast TR24 experience to support 1st timers Robin Atter, Martin Rodell & Jason Walker, pushing the team to an impressive average lap time of 57:26. Finishing in an impressive 20th place, the team were rightfully delighted with this impressive showing.

The next team of 8 was the GRC Gingerbread Men. Led off by the trail loving Dale Towning, the team completed a solid 23 laps. Supported by captain and seasoned TR24 runner, Mark Hillson the team averaged 1:02:47 which included fastest runner Russel Maksymiw’s lap time of 50:06. Wayne Baxter, Kate Marshall and John Bainbridge completed the team which ran through the night before Rob Howbrook arrived on the Sunday morning to complete 2 laps, just 24hrs after racing the Heckington 10 mile road race.

‘GRC Not Fast Just Furious’ was the final competitive team. Martin Carter was the captain of the team made up of CJ Walker, Tracy Webb, Zoe Wragg, Justyna Gill, Konrad Owczarek and new member Poppy Marriott. Impressively, CJ Walker ran the 10k morning race before the main event had even begun. Add that to her three laps during the main event to make her weekend total very impressive indeed. Peter Bonner also arrived on the Sunday after running at Heckington to complete a double lap, giving the rest of the team some much needed respite and running their two fastest laps in the process, giving the team a 1:14:09 average and a 20 lap total.

The remaining team (Grantham Running Club E) was a team made-up of some talented athletes who are coming back from injury or fitness setbacks - not wanting to potentially dent team aspirations and bank some strong training miles. With a ‘just see how it goes approach’, the team was made-up of Helen Brown, Dean Riggall, Naomi Jepson-Rivers, Fraser Marshall, Gordon Geach and Richard Payne. Completing 15 laps despite doing very little running at night, the team produced some surprising performances with Dean Riggall’s eye catching 46:46 proving he’s clearly not as injured as he thought.

After the event, club members were left with the feel-good sense of achievement and tiredness in equal measure. Aside from the main event of running, the social aspect that’s been missing throughout the pandemic, drew warm comments too. A number of members had entered TR24 for the first time, with Zoe Wragg summing up their enthusiasm with "“Fab weekend with the GRC at TR24. Such a challenging course but despite the moaning I’m sure I’ll be back next year!” 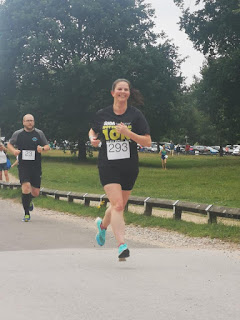 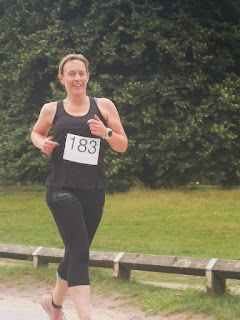 
An impressive 58 runners took part in GRC’s club 5k race at Harrowby Hall Lane. On a warm July evening with the starting temperature something like 25°C, runners were set for a challenging evening. This event was given the added bonus of being listed as Round 2 of GRC’s Grand Prix series for 2021 having been unofficially measured with a measuring wheel, which has allowed runners to claim PBs over the course.

The race was won by the ever-improving Sam Jepson-Rivers with a time of 18:30, who broke into the county 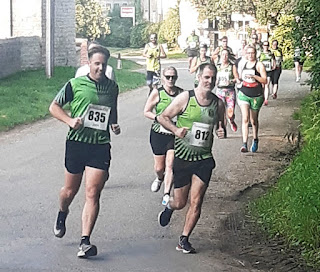 The standout performers were the vast number of beginners who pinned a race number on for the very first time. Prepared to give it a go, the new members got a real flavour of what a race like scenario would be like and will be more confident competitors going forward!

The evening's other impressive performers were Joe Diggins, Robert Howbrook, Robert McArdle, Catherine Payne and Sarah High who all scored in excess of 70% on the age graded scores and scoring good points for the GP Series.

The event could not have gone ahead without the continued support from the club, with many stepping forward to volunteer in a vast array of capacities. Special thanks go to Robert McArdle, Andrew Pask, Ady Walker, Matthew Williamson, Nim Jepson-Rivers, Frazer Marshall, Stuart Pick and CJ Walker Lees.