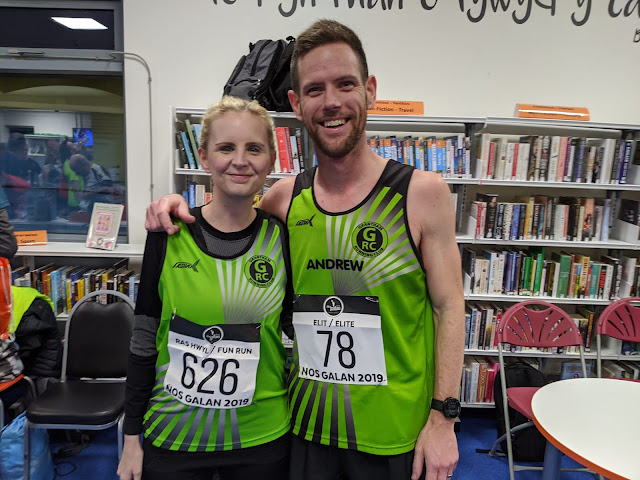 GRC’s husband and wife duo decided to finish the year in style, competing in the prestigious Nos Galan NYE races in Mountain Ash, South Wales. The race which is a NYE party for runners commemorates the life of legendary runner Guto Nath Bran, takes place under the streetlights of the Welsh mining town. Every year a famous sportsman lights a beacon in the town centre and this year the honour fell to international rugby referee Nigel Owens.

The elite mens race saw the return to racing for GB athlete Dewi Griffiths. After 8 months out with health issues he decided to ‘dip his toes in’ to racing again to measure the scale of the task ahead to qualify for Olympics in Tokyo 2020. His time of 15:18, whilst impressive was nearly two minutes off his best but credit to him for allowing lesser athletes to get a good scalp on their record. Andrew Pask in the same race went with the frightening pace, setting a mile PB to start. Thankfully he held on over the 4 lap course to post a new 5km PB of 19:18. The race was won for the 3rd time by Kristan Jones in a time of 14:15 .

Sara Pask, running in the later mass race looked strong throughout. Hoping for a sub 30mins run, Sara kept battling her way through the extensive crowds. After a big kick for the finish she saw the race clock tick past the 30mins but knew that it took some time to pass the start after the gun. Tentatively waiting for the official results, Sara was disappointed to be on the wrong side of the 30mins with 30:09 in her first race over the distance.
Posted by GRC at 31.12.19 No comments: 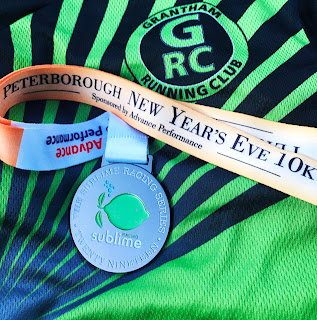 Four members of Grantham Running Club celebrated the end of 2019 by participating in the Peterborough New Year's Eve 10K at the scenic Ferry Meadows area of Nene Park. Heavy rain and flooding in preceding weeks had deposited lots of debris and left paths on the planned multi-terrain course unsuitable for racing, leading to a last minute change of route to avoid flood risk areas. The switch to a road-certified course meant that the route was run entirely on tarmac, albeit it muddy and slippery in places.
The new course took in the varied landscapes of the large country park, and the first question on everyone's lips was soon answered - yes, the famous bouncing bridge still featured on the amended route! Although the course was road certified, results have been currently officially classified as multi-terrain, making the race not eligible for 10K Personal Bests on the Power of 10 website.
The December weather was kinder than in recent weeks, with runners enjoying a dry, crisp and bright morning for this enjoyable race. First home for the club was Tony Johnson in a time of 00:41:25. Having had a busy month of racing, Tony enjoyed seeing the year out at Ferry Meadows and was pleased that the mud wasn't as bad as he had feared upon reading the course description.
First woman home for the club was Kate Marshall, whose time of 00:57:17 represented her fastest 10k race time to date. Claire Fritz was next home in 01:00:28, again a fastest recorded time over the distance. Tracy Webb completed the trio of GRC ladies in a time of 01:01:07.
Runners were rewarded for their efforts with goodie bags, T-shirt's and medals. The GRC runners enjoyed celebrating the New Year at this well organised and engaging race, and look forward to racing in the beautiful surroundings of Ferry Meadows again. The race was won by James McCrae of Hallamshire Harriers in 00:31:24, with Beth Pascall of Belper Harriers the winning woman in 00:37:24.
Posted by GRC at 31.12.19 No comments: 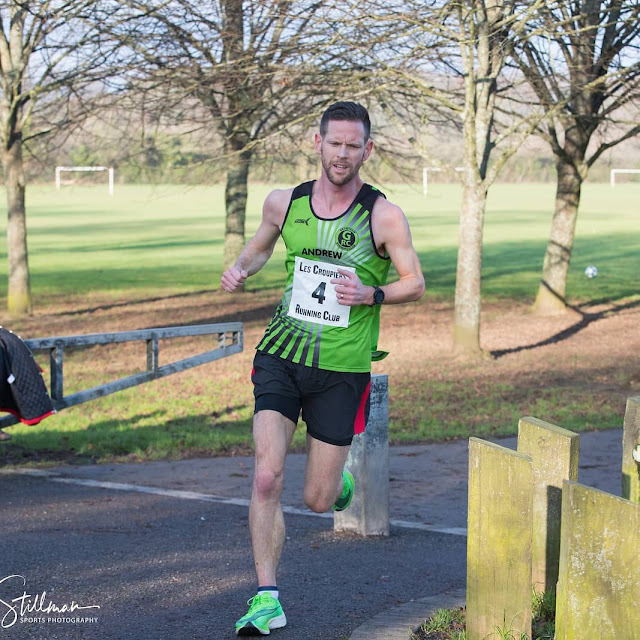 GRC’s Andrew Pask recently took part in the very competitive Old Father Time 5. Hosted by Les Croupiers club in Cardiff, the no frills race is one of the few exclusively veterans race on the calendar. The race used as the Welsh Masters 5 mile Championships attracts a very strong field for the two lap and speedy event.

At the shape end the race was packed with strong athletes in the male and female categories. With winning times of 26:12 for the men and 30:30 for the ladies you could be forgiven for forgetting that this is a veterans only event.

Andrew Pask was in good form going into his second 5 mile race of the year and was hoping to smash his time of 32:38 set at the Bassingham Bash in August. After a ridiculously fast start, Andrew felt the bite of the pace early on. Passing the 5km mark in 19:32 he was now hanging-on for dear life. Settling into a pace more suited to a half marathon for the final two miles he clung on to post a PB time of 32:16 and 46th position.
Posted by GRC at 29.12.19 No comments:

With the clock ticking on 2019 and local race opportunities seemingly few and far between, a plucky group of Grantham Running Club members on Sunday 29th December made the seventy minute drive to the famed Mallory Park race circuit in Kirkby Mallory, Leicestershire, to take part in the second meeting of the Winter Series of races. The grateful race director welcomed back incentivised GRC members having praised the club for supporting en masse the inaugural event in November.
The morning beginning with a rare opportunity to take part in a one mile road race, Peter Bonner and Rob Howbrook returned to see if they could better their November efforts. It was Peter who finished first for GRC, carving his way up to third from approximately halfway and retaining that place to the finish, clocking 05:30. Confessing afterwards to some Christmas over-indulgence, Rob Howbrook finished fifth in 05:44, thirteen seconds down on his best. Both lamented the strong breeze that plagued a large section of the race track. The one mile race was won by Tony Woodward in a new course record of 04:40.

The 5K race comprised three laps of a mostly flat loop circuit with the benefit of an additional downhill section at the start. Alas the eleven members of the Green Army had to contend with an ever stiffening breeze which tempered the course’s PB potential.

First home for GRC was Joaquim Jeronimo. He clocked a respectable 18:14 to finish eleventh, some 39 seconds down from his PB set at the November race. Veteran Gerry Hyde, who is currently training for the European Duathlon Championships in March, was pleased to finish a year plagued with injury in 20:11 – a time that saw him complete his only road race of 2019 inside the top twenty. Next to finish was Russell Maksymiw (21:50), who struggled somewhat with the windy conditions.

First GRC female to finish was Naomi Jepson-Rivers (24:01) who was also cursing the wind that contributed to seeing her finish just four seconds shy of her PB set at the November meet. There was contrasting emotions for the clearly elated Martin Carter, who ran a smart progressive race to break 25 minutes for the first time, shaving 18 seconds from his previous 5K best with 24:59.

Struggling with a prolonged illness, Paul Jepson finished in 25:23, some two minutes slower than his best. Kate Marshall perhaps earned the distinction of ‘unluckiest runner of the day’ finishing an agonising one second outside her PB. Nevertheless she was chipper with her consistency to clock 28:11 in trickier conditions than her PB performance.
The performance of the day arguably came from Claire Fritz who benefitted from increased recent training mileage to exceed her own expectation, breaking her PB set at Lincoln in the summer by fourteen seconds finishing in 28:58. Tracy Webb (29:06), Louise Kennedy (33:01) and Yvonne Buckley (36:06) were all down on their previous 5K bests but all praised the event for its location and improvements in organisation.  All vowed to be back to attempt the race again.
The race was won by James Wardle in a new course record 15:39. The winning woman was international triathlete Sophie Coldwell, also with a new course record 16:24.
With the breezy 5K race complete, the six lap long 10k race was positively plagued by the now stiff wind coursing down half of the route. First home for GRC was Chris Limmer, who ran from his parents home eleven miles away to warm up for a target marathon paced test in the race itself. Showing impressive form, he accelerated in the final mile to finish eighth in 39:21.
Next home in thirteenth placed was Samuel Jepson-Rivers, who ran a disciplined, even paced race to break forty minutes with 39:56. This partially allayed the disappointment of seeing his 39:26 from the subsequently declared short Leeds Abbey Dash officially annulled - this time was fifty seconds quicker than his previous official personal best.

Creeping inside the top twenty were Tony Johnson and Peter Bonner, both happy with the opportunity to keep ‘race sharp’ over the festive period. Tony, clocking 41:14, was particularly keen to return to the venue in better conditions and Peter, undoubtedly feeling the effects of his mile race effort just an hour earlier, echoed the sentiments after coming home in 41:30.
Stuart Baty (49:39) was next over the finishing line, somewhat down from his best, but happy with recording a sub fifty minute clocking. Caroline Davis (49:52) deliberately took her foot off the gas after another year of racing extensively and successfully, enjoying the opportunity to run at the famed race circuit. Sarah High (52:32) was another who vowed to return in hopefully less blustery conditions.

Last, but by no means least, to finish for GRC was Julie Braker. On the comeback trail from serious injury she completed her only road race of 2019 in 54:52. This represents an outstanding 84.55% age grade result – the highest of the year by a GRC woman.