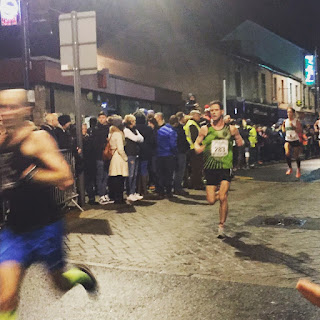 On New Year's Eve, Grantham Running Club's Andrew Pask competed in the prestigious Nos Galan Races in Mountain Ash, South Wales. The event which commemorates the life of legendary runner Guto Nyth Brân who died tragically during a race in 1737 draws athletes from across the UK and 12,000 supporters to the streets. Each year excitement builds for the arrival of a mystery runner whose always a famous person from the world of sport. This year was no disappointment with Wales football manager Chris Coleman given the honour. After the children's races, torch lighting ceremony and fireworks Andrew Pask in the elite race was anxious to get the 19:00 race underway. In a national standard field, Andrew finished the three lap 5k race in 135th with a PB time of 19:52. Speaking after the race he said 'I've never been in such a high quality race as Nos Galan and it was a real privilege to share the same start as the elites, the top ten all ran sub 15mins. My aim was sub 20mins so I was happy with my time. It was nice to sit back and enjoy the mass race which started just after I'd finished. It was a memorable New Year's Eve for sure.'


Grantham Running Club managed to secure seven places at the very popular Keyworth Turkey Trot, an end of year half marathon on an undulating course around the quite rural roads surrounding Keyworth. Now in its 33rd year and a sell out on the day it opened for entries, the Turkey Trot attracts 1,100 runners all vying to win one of the select few Christmas turkey prizes on offer. Those who didn't win a turkey could content themselves with one of the event's famous post race mementos, which this year was a medal which doubled up as a multi-tool. The near perfect running conditions were reflected in the times posted with strong performances from the entire GRC contingency.


First home was GRC Chairman Matthew Kingston Lee, who clocked a fine 76:45 to take an excellent eighth place, earning him first position in the V40-44 category. After collecting and posing with his prize turkey he said: “I was pleased to end the year with a positive result - a top ten finish, a course PB and the V40 prize. The turkey will be enjoyed by all the family on Christmas Day! The race was uneventful but went to plan. I'm very content to have a 'season's worst' breaking 77 minutes".
Next to finish was Andrew Pask with a season's best time of 89:19, just sneaking into the top 100 finishers in his 20th half marathon. Gav Meadows closely followed - although Gav set an official PB, he was an agonising 12 seconds off the prized sub 90 minute time. Catherine Payne, in her first race back after a three month layoff due to a serious injury, was pleased with her steady 96:05, which was good enough for runner up spot in the LV45 Category.

Despite getting held up in the crowds before the start line, Nick Payne worked through the field to grab a PB with a time of 99:04 finishing just behind was Robert McArdle, whose 99:19 was a season’s best.

The star of the day however was Sarah Willis, with a fantastic run to knock almost four minutes off her PB set in October. Her time of 1:41:23 is an amazing achievement considering she only started running seriously six months ago. (Member of the month in red)


Grantham Running Club's Suzanne Britz took part in the annual Barbados Half Marathon on Sunday 5thDecember as part of the Islands Run Weekend where they host a variety of different races over the two days. The chip timed race started at 5am in 26 degrees C with a cool sea breeze which allowed for a easy start. The race started in the dark on the Esplanade just south of Bridgetown and took her north along the coast through the city, past the harbour, National Heroes Square and the Port before briefly following an inland route along Spring Garden Highway then returning back to the coastal road to the point of turnaround at Holders Hill, St. James where she embarked on the return leg running into the rising sun and temperature. There was plenty of much needed water stations with pockets of supporting crowds and steel pan players along the route keeping her spirits up. Suzanne had set herself a target of coming in under 2hours with the hope of beating her previous half marathon personal best and whilst she managed to complete the race in 1hr 58mins, this was 4 mins outside per personal best but given the temperatures, she ran an excellent race. Overall she finished in 86th position from 344 local and international runners and was the 28th female from 188 ladies that took part. She received a t-shirt and finishers medal when she crossed the line and celebrated with some well earned rum later that day!

The HOKA ONE ONE Stockport 10 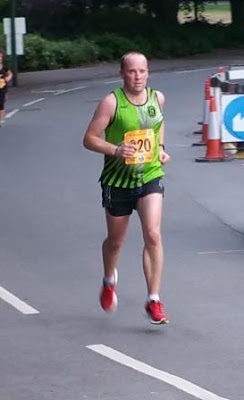 Grantham Running Club's Paul Rushworth travelled to his home town to complete in the Stockport 10 mile road race. Over 1200 runners took part in the event. The race followed an undulating route over roads and urban trails around the town in South Manchester. Paul finished the race in 237th position with a time of 1:13:44, his time was only 2 minutes outside his previous attempt at the course in 2011 but over 8 minutes behind his personal best time set in 2002. 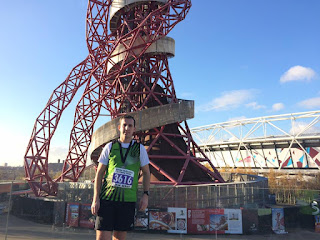 On Saturday Grantham Running Club's Andy Atter took part in the winter 10k series in London's Queen Elizabeth Olympic Park, a phenomenal setting following in the footsteps of the London 2012 greats.
The race consisted of three laps around the confines of the park running alongside the Olympic Stadium, Copperbox Arena, Aquatic Centre and the iconic ArceloeMittal Orbit.
Andy ran a strong race finishing in a time of 42:02, just outside his PB, in 52nd position out of the 450 runners. He said 'the conditions were perfect and it was a spectacular venue - the short steep inclines made some parts pretty tough but I would recommend it to anyone' Andy has now finished his races for the year but has plenty in store for 2017 including the Greater Manchester Marathon in April.