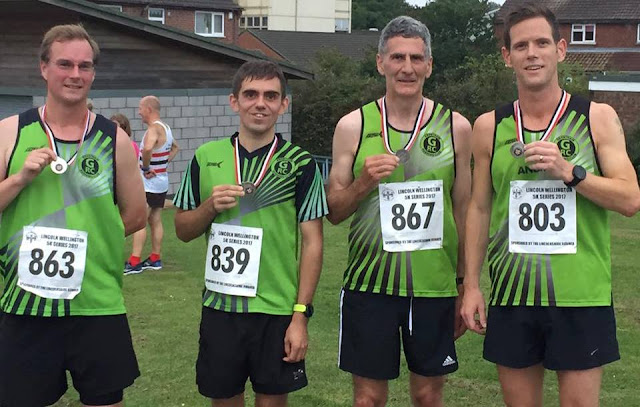 Four members of Grantham Running Club took part in the final race of this year's Lincoln Wellington AC 5k series at Yarbrough Leisure Centre, Lincoln. The four race series which draws the county's best track and road running athletes was completed in near perfect running conditions. Medals were awarded to all the runners who completed the fourth and final race and as all four are run over the same course it gives those competing a chance to gauge their improvement. First home for GRC was Matt Williamson out sprinting Rob Howbrook over the last 800m to set a new PB. Having recently returned from holiday and short of speed training Rob had to settle for a time some 15 seconds short of the mark he set earlier in the season. Less than a minute behind came the fast finishing Andrew Pask setting a season's best. Another runner returning from holiday was Peter Bonner whose time of 20:30 was a full minute away from where he was when he was racing and training regularly earlier in the month.

Grantham Running Club’s Matthew Kingston-Lee took an unexpected victory at the Thorney 5 Mile Road Race, held in the small village east of Peterborough on Sunday 20th August. There was further success for the club at the race with Catherine Payne winning her age group category again.
The out and back course, utilising the old A47, is flat and potentially very fast, tempered somewhat by the winds that regularly blow across the open fens. The weather on race day was sunny with temperatures in the high teens with a moderate breeze making the going challenging in the second half of the race.
Returning from a two week summer holiday, Matthew Kingston-Lee was unsure of his form going into the race. He sat off the fast opening pace, lying in around tenth place for the opening minutes of the race. Feeling better than he feared he made the juncture from the second chasing pack to join a group of three who were chasing the lead runner around ten seconds further up the road. The group dropped a runner as they approached the halfway turning point, and began to reel in the ailing lead runner, passing him as they approached 5km.
Facing a headwind for the final two miles of the race, the battle for the lead between Matthew, Nene Valley Harriers’ Robert Brownlee, and Peterborough ACs’ John Pike became a tactical affair, with the pace surging and then slowing as the runners appeared to take turns to break the tow of the following runners. Entering the final mile, Pike slipped off the back of the group as Brownlee made a concerted bid to take victory. Matthew was able hold onto the heels of Robert and was able to pull alongside as the Nene Valley Harrier tired, Sensing his chance for victory, Matthew maintained the pace set and was able to pull clear, crossing the line first in 27:30 (a new PB by 23 seconds), ten seconds clear of second placed Robert Brownlee, with John Pike third in 27:46.
“I certainly wasn’t expecting such a good result!” commented Matthew after the race. “I’d not run as often as I’d liked on my holidays and felt sure the late nights, good food and plenty to drink would have left me rather unfit. The race though went perfectly. I raced well tactically, sheltering myself as much as possible from the wind and not surging as hard as the others when I hit the front during the race, saving myself a little more energy for the final mile which I knew would be the hardest because of the headwind. "It’s only my third race victory and is definitely the most satisfying. Maybe I should holiday more often!”

To add to the successful morning for GRC, Catherine Payne on her way back from injury claimed first place in the V50 age category, clocking a fine 34:40, just over a minute slower than her 2016 time at the same race, held in arguably better conditions. Behind Catherine, Sinead McDonnell made an impressive five mile debut, clocking 41:42 to finish 36th female. She too lamented jet lag and that two weeks spent on holiday may have adversely affected her concentration and fitness.
Another five mile debutant was Richard Payne. Continuing his fine run of ever improving form, Richard finished a fine 35th overall in 31:45. Robert McArdle was the other Grantham Running Club to complete the race, coming home ninth in his age group, clocking 37:06.
The winner of the women’s race was Philippa Taylor of Nene Valley Harriers in 31:00. 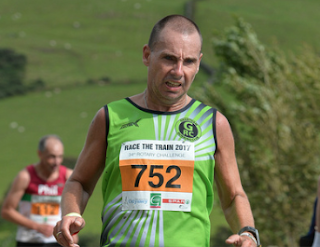 Tony Johnson has run his 17th Race The Train, Tywyn, Wales. He completed the Rotary Challenge, a distance of approx. 14 miles of mostly off-road, hilly terrain and this year extremely wet and muddy in a time of 2:09.02.
Posted by GRC at 19.8.17 No comments: 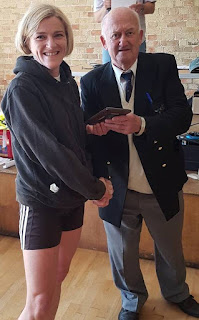 The final Peterborough 5k race of the season incorporates the prize giving for the recent Grand Prix series. With the positions from your three best races to count these races have been popular for over 25 years giving a high level of competition at the very reasonable price of £5 a race. The biggest problem facing the organisers is overcrowding and coping with 200+ finishers in 5 minutes. Grantham Running Club’s Catherine Payne once again collected the prize for FV50 whilst Rob Howbrook earned his prize as fastest MV55.

With regard to the stand alone Barney 5k  race Catherine picked up her second trophy of the evening when she came first in the FV45 category in a time of 21:01 round the now very familiar Ferry Meadows course.


GRC took a small contingent of  seven on the short trip to Newark. A beautiful day albeit very warm to be taking on a half marathon. Despite this there was some great performances on the day. Joe Clarke was first home and marked his debut run in the Green and Black with an impressive time of 1:28:56. Next back from GRC was the consistent Tony Johnson who came finished in 1:31:47. Richard Payne was third man in a very respectable time of 1.33.10 on his first run at this distance. He was closely followed by the marathon metronome Gav Meadows who put in a solid time of 1:33:26 as part of a longer run. Despite the soaring heat there was an impressive personal best from Stuart Reader who crossed the line in a time of 1:47:47 but felt there was even more to come. Also running from the club was another marathon expert,Neil Emerson, who finished in a time of 1:51:06 and finally making a return to the half marathon after a few years out was Warren Stark who despite limited training came home in a decent time of 1:53:04 only a few minutes short of his best.

The course is a 10k looped course taking in sea views along the promenade heading  North out of Blackpool and then back towards the north pier before heading north again out of the seaside resort with any funds raised going to the local fire service benevolent  fund.

Grantham Running Club stormed to success at the annual Sleaford 10k open road race on Friday 11 August. The club was well represented with 29 of its members tackling the largely flat course through quiet Lincolnshire country roads, to complete the road race through Scredington and Burton Pedwardine. Participants started in good race day conditions, hampered only by light drizzle with runners turning into a brisk headwind at the 4 mile stretch of the race.

GRC dominated the ladies race, led home by Holly Durham, fresh from her recent win at Notfast 10k, securing her second win in as many months in a time of 42:07. Holly was followed home by her sister Penny Hodges securing 4th lady and first prize in her age group with a time of 44:30.

Andy Atter led the GRC men home, maintaining current form and narrowly missing out on a top ten place, in a time of 40:01, closely followed by team mate Scott Jones who ran a solid race in a time of 41:29. The performance of the evening came from GRC newcomer Stefan Latter smashing his previous 10K time in a personal best of 44:22, with Stuart Baty also achieving a well-earned PB of 48:58. In his first outing for GRC Walter Cruz-Flores secured a time of 53:18 and commented, "I really enjoyed it. I'm very pleased with my time. I now can't wait to go and eat some cake".

Graduates from GRC's 2017 beginners programme also participated, many running their first race in GRC club colours, their achievement all the more impressive as six months ago they were all new to running. Graduate Edina Burns completed her first 10k race after participating in the Couch to 5k programme earlier this year. Showing great potential, Edina finished in a time of 1:04:46, with the hope of achieving a sub 60 minute 10k next season. 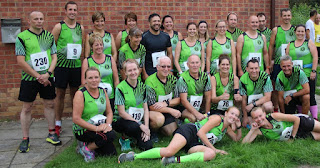 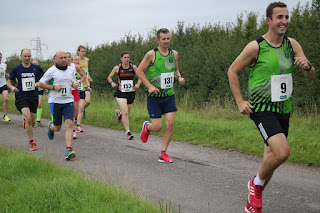 On 6th August Caroline and Paul Davis took part in the renowned Stur Half hosted by Dorset Doddlers running club.
The race was held in the heart of the Dorset countryside along narrow lanes and through several small villages. Though the route was described as 'undulating' it became apparent later in the morning this was not quite the case.
With the race starting at 10:30am the sun was beginning to feel quite strong on the start line and the gentle breeze was welcome. The first decent climb came after only a mile and thereafter the course provided plenty of ups and downs! The middle of the race was relatively easy going but what was not expected was the ascent at 11.5 miles that lasted a whole mile! A welcome downhill to the finish meant at least there was some energy left for a smile as we crossed the line.
A pint of the local brew rounded off a hard but enjoyable morning. Paul finished the race in a time of 1hr 36min 26secs which he is more than happy with and Caroline completed the course in 1hr 57min 57secs. Afterwards she declared "so pleased to have got to the end of that one, and even happier to have got back in under two hours!"