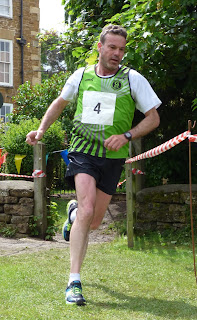 Two members of Grantham Running Club completed the Waterway 30 in North Nottinghamshire on Saturday 26th January.
The 32 mile circular route takes in the scenic rural countryside using a combination of the two main local waterway towpaths - the ‘Cuckoo Way (Chesterfield Canal) and the Trent Valley Way (River Trent). Ninety percent of the route was off-road with only some minor roads and tracks linking the start and finish in South Wheatley to the towpaths. The towpaths were extremely muddy and rough underfoot which made it a real challenge. The second half of the race was especially tough as it was into a strong headwind on the banks of the River Trent.
Nick Payne, the club’s most experienced ultra runner, completed the event in 6 hours 4 minutes and 21 seconds. He finished 58th out of 164 finishers.  For new club member John Southwood the event was a real baptism of fire for it was twice as far as any other event John has taken part in! He finished in a highly respectable 6:24:10, finishing in 87th place. John enjoyed the event and is now considering other events of a similar distance or even longer!

Both members enjoyed the race, particularly the four well-stocked aid stations which had a wider range of food and drink than a picnic! Finishers received a good quality technical t-shirt and a personalised engraved medal.
The race was won by Paul Richardson from Garden City Runners in 3:52:14. The first lady home was Melissa Venables from Spa Striders, who finished in 4:28:58.
Posted by GRC at 26.1.19 No comments:

Over four hundred runners, including sixteen members of Grantham Running Club, descended on the Cambridgeshire village of Folksworth on Sunday 20th January for the annual 15 mile road race. The two lap race contains some energy sapping climbs and provides a real test for runners, many of whom use the event as a training race for a spring marathon.
The Folksworth 15 is a race regularly blessed with freezing temperatures – the snow afflicted race in 2018 was described by winner Aaron Scott as ‘the worst conditions he had ever raced in.’ Although it was a cold morning, conditions were generally favourable for racing – the presence of the winter sun ahead of the 11am start necessitated many to make a few last minute changes of attire.

The first finishers for GRC were Jonny Palmer (a second claim GRC member – his first claim club Bourne Town Harriers) and Chris Limmer who came home very pleased with their efforts in sixteenth and seventeenth respectively in 1:32:59 and 1:33:21. Having been within a few seconds of each other during the first few miles, a short break where Chris stretched a tight ankle meant Jonny pulled clear. Feeling good, Chris recovered some of the ground over the second lap on Jonny, both of whom enjoyed a quicker final lap to make up significant time on those around them at halfway.
Joe Clarke was third home for the club, continuing his fine run of form to finish in 1:39:26. Men’s Team Captain Andrew Pask (1:40:59) ran a morale boosting 4 ½ minute course PB at a pace comfortably inside that needed to run a sub three hour spring marathon. Tony Johnson finished not far behind Andrew in 1:41:46, claiming fortieth overall and fifth in a highly competitive MV50 age category. Shortly before jetting off to Gran Canaria for the first of two Spanish marathons, Gav Meadows was pretty happy with his 1:45:29 considering it was run without his usual pre-race taper.
Sarah Chynoweth was the first GRC woman to finish. Following Gav throughout the race she very nearly caught him at the end, finishing in an excellent 1:45:41. This placed her a fine eighth in the women’s race and third senior woman to finish leading the female team to runner's up position.  Behind Sarah came Catherine Payne (1:53:31) who arguably put in  the performance of the race by a GRC runner. In her first race since suffering a severe injury competing at the Thunder Run 24 Hour Race in July 2018, Catherine ran superbly to finish thirteenth woman overall and first FV50 runner for the third year in a row. Sandwiched between the two, Dean Riggall finished in 1:48:36, treating the race as a progressive training run.

Behind Catherine, Rob McArdle finished ninth in the MV55 category in 1:58:11. He was followed by Penny Hodges who was disappointed with her time of 2:01:38, despite this being four minutes faster than her 2018 time. Caroline Davis was pleased to better her 2018 time by over ten minutes in 2:04:52. In his longest ever race Sam Jepson-Rivers ran an impressive even paced 2:06:05. In his first race since the 2018 Folksworth 15, Gordon Geach was pleased that the weather was better than in 2018 and happy that 2:07:27 represented a 25 minute improvement on his effort twelve months ago. Warren Stark felt the cold and the hills on the second lap but should be content with his 2:13:59, given that his half marathon PB is just two minutes quicker. In her longest race to date Justyna Gill was the final GRC runner home in 2:54:02. 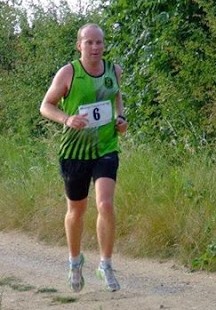 Grantham Running Club's Paul Rushworth took part in the undulating, Four Villages Half Marathon near Chester. The 13.1 mile race begun in the village of Helsby and visited Dunham on the Hill, Mouldsworth and Manley. This year's race was run in ideal conditions with a slight precipitation and a cool breeze, a stark contrast to the driving snow in the previous year.  1,632 runners finished the event and Paul returned in 392nd position and with a time of 1:37:22.
Posted by GRC at 20.1.19 No comments: 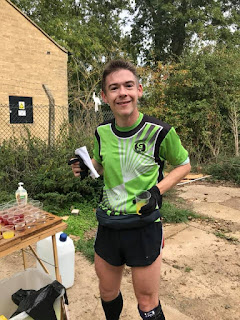 The challenge was to run as many three mile laps of the Regatta Lake as possible within the six hour time limit.  The event was well organised, with an aid station at the end of each lap offering a selection of sugary snacks along with coke, water and orange squash.

The strong wind coupled with the temperature barely getting above freezing made for testing conditions.   Nick decided to finish at marathon distance rather than continue running for the full six hours.  Nick finished the marathon in a time of 4 hours, 3 minutes and 25 seconds which placed him 25th out of 60 finishers. Nick received a medal, beer and chocolate as a reward for finishing.

Nick commented: “The wind and cold weather made it tough going today, but I am pleased to finish another marathon in around 4 hours.  The second half of each lap was into a headwind which made it even more challenging.  However, it was another enjoyable event.”

The event was won by Rob Payne from Caistor Running Club who ran 17 laps (51 miles) in the six hours. The first woman was Helen James from Barrow Runners who ran 12 laps (36 miles).
Posted by GRC at 19.1.19 No comments: 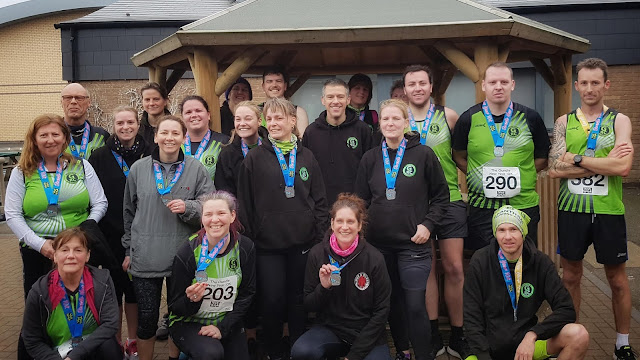 A 2-3 finish at the Oundle 10K on Sunday 13th January ensured a small piece of history was made for Grantham Running with two runners in green claiming podium places in the same race for the first time. Kicking the New Year off with a bang, the club also won the Men’s Team Trophy and there were several new personal bests from the twenty one GRC runners who took part in what was the opening round of the club’s 2019 Grand Prix Series.
Hosted for the first time, the Oundle 10K took runners out of the historic market town of Oundle on a scenic, mildly undulating two lap triangle shaped anticlockwise course between Oundle, Cotterstock, and Glaphorn. On a reasonably mild, mostly cloudy morning, conditions were made challenging by a bracing stiff westerly wind which made for a brutally tough near mile long steady incline, heading directly into the wind, shortly after the opening kilometre. This served to sap the energy reserves, especially when the exercise was repeated on the second lap with the wind, if anything, strengthening in intensity.
Finishing second in the race was Matthew Kingston-Lee in 00:36:42, with club mate Ian Williams coming home third just six seconds behind in 00:36:48. In an exciting race, Matthew initially pulled out a gap on Ian as he moved into third place with an extravagant surge of pace into the headwind at 2km and then worked hard to close down and overtake the second placed runner at just after halfway.
With Matthew still in sight and sensing a chance to finish third, Ian closed down and also passed the ailing fourth placed Mathias Martinez into the headwind section. Matthew then dramatically stopped with around two kilometres left to run to retie his laces that had come undone at halfway, allowing Ian to briefly take second spot. With right trainer now firmly reattached to foot, Matthew immediately retook the position on the final climb of the race and was just about able to eke out a small gap by the finish. 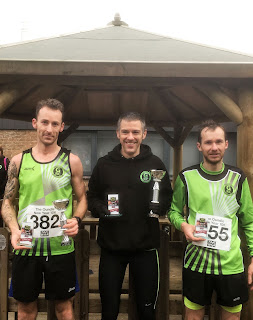 All this action meant that Ian bettered his old PB, set at the November 2018 Leeds Abbey Dash 10K, by over 30 seconds. This is an outstanding performance, especially when considering that both the winner, John Uff (35:13) and Matthew were both two minutes down on their best 10K times set late in 2018 partly due to the windy conditions.
Another excellent performance came from eleventh placed Joaquim Jeronimo in a time of 00:40:45, which secured the club an emphatic victory in the Men’s Team Competition. Next home for GRC was Ian McBain, who was pleased with his time of 00:43:58 given the challenging weather conditions, which was within seconds of his personal best.
Samuel Jepson-Rivers followed and was delighted to have achieved an impressive 00:46:02, establishing an official 10K PB and bettering a previous 10k time by almost eight minutes. It was a great day for the Jepson-Rivers family as Samuel’s wife Naomi Jepson-Rivers was delighted to better her personal best by more than two minutes, coming in at 01:00:21, and Samuel’s father Paul ran well to finish fifth in the V60 category, clocking 00:53:31. The Dodwell’s were another family to return home happy with Jack Dodwell clocking 00:47:01 and his brother Sam thrilled to finish in 00:50:17, bettering his old 10K PB by nearly seven minutes.
Nichola Webster was first woman home for GRC at 00:56:45, enjoying the day despite battling the strong wind. Tracy Webb, who continues to chip away at her 10k race times, reduced her personal best on the road by more than a minute, with an excellent time of 00:58:15. Kathleen Gray was next finisher for the club in a time of 00:59:15, a personal best denied by the challenging winds.

Kathleen was followed by Sylv Hull (01:00:03) just ahead of Sue Swann (01:00:05). Kate Marshall (01:02:00) struggled with the wind, especially on the second lap. New club member Sue Hardy finished in 01:03:29, Claire Fritz clocked 01:04:48 ahead of Edina Burns (01:07:25), with Louise Kennedy just behind in 01:07:27 and Yvette Taylor hot on Louise’s heels with 01:07:33. Paula Ebbins, in what may be her first ever race for the club, completed the GRC finishers with a time of 01:10:28. Unfortunately, Vicki Geeson was forced to withdraw mid-race due to injury but praised the first aid assistance provided to her and hopes to be back up and running soon.
With a few shortcomings addressed the Oundle 10K is surely set to be a popular early year fixture on the local race calendar and provided a great opening round to what promises to be a competitive 2019 GRC Grand Prix Series.
Emily Foran of Sleaford Striders AC was the winning woman in 00:40:51. There were 472 finishers.
Posted by GRC at 13.1.19 No comments: