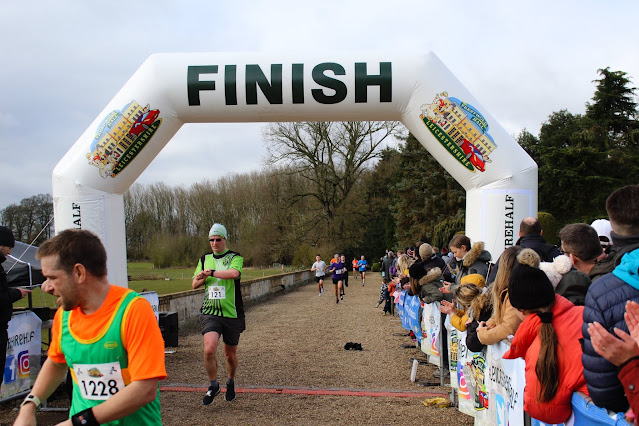 
The rearranged Beeston 5 was the first race of the Grantham Running Club’s 2021 Grand Prix Series and attracted nine of the club’s better runners to this evening event in the grounds of Wollaton Hall. England Athletics has chosen this as a Cross Country venue for the past few years not because of the Stunning Grade 1 listed Elizabethan Mansion but because of the tough routes that can be carved through the 500 acres of undulating natural woodlands with a variety of surfaces, severe gradient changes and an awful lot of tree roots to fell you as you compete with some of the top runners in the region in what was a quality field.  As was befitting the home of Cross Country the race was started on a 100m wide start line with everyone racing to a narrow gap in the fence in 400m. Leading home the GRC team in what was only his second race in six years was Ben Hatherley dipping just below the 34 minute mark in 33:56. Enjoying a cooler race in the shadow of the trees MV40 Gav Meadows took the hills in his stride clocking an impressive 35:19 in his first ever 5 miler. Close on his heels was Catherine Payne with 35:55 to set the third fastest time for a woman in her age category at this distance in the UK in2021 and establish a commanding lead in the Woman’s club Championship. Next in for the club was Robert McArdle in 36:50 to take an early lead in the Men’s championship with Ben Mason not far adrift in 37:55. In his best running form ever Stuart Baty capitalised on his increase in training mileage in lockdown to record his highest ever score with a time of 38:24. Michelle Parczuk was second lady home for the club in 40:13 which reflected how tough the course was on the day but still with a score that suggests that she will be among the leading women at the end of the year. Women’s X/C captain Sarah High had a similarly impressive run crossing the finish line in 42:04 in what was arguably one of her top five runs off all time.

The final athlete to finish for GRC was MV60 Tommy Napier in 42:41, almost two minutes outside his pre-pandemic PB but still well above club standard even on this challenging course.