GRC perform well despite tough conditions at Sleaford Half 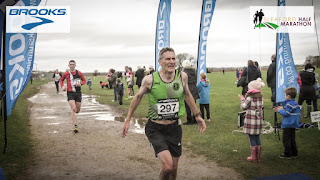 Grantham Running Club members took part in the Sleaford Half
Marathon at RAF Cranwell on Sunday as they continued their spring marathon
preparations. The 13.1 mile course was a tough test in windy conditions with a
challenging 2 mile off-road section to keep the athletes on their toes.

First home for GRC was the incredible, 57 year old Rob Howbrook (pictured) who improved on last years performance by nearly a minute, breaking the 90 minute barrier finishing in 1:29:47. Placed 53rd overall & 2nd in his age category.
Rob continues to amaze fellow club members with his performances regularly in the 80% bracket of the WMA grading system (national standard) and despite his advanced age remains one of the quickest athletes in the club over a variety of
distances.

Second over the line was Gavin Meadows finishing 62nd overall in a time of 1:31:28 narrowly missing out on a personal best. Gavin said 'I was also hoping to keep up with Rob in this race but his cross-country experience really showed in the off-road section - he was gone!' 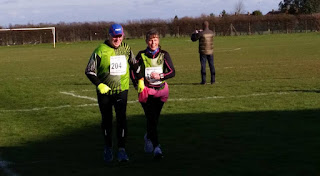 Grantham Running Club's Brendon and Yvonne Buckley, continued their Spring marathon preparations in Stamford by running the St Valentines 30k. Finishing hand in hand, the golden couple were rewarded with a box of chocolates and a huge round of applause from fellow club members. Proving that age is no barrier the Buckley's, who are preparing for their first marathons in Manchester and London finished with an excellent time of 3:46:45. The hilly course and freezing windy conditions did not deter 17 runners form GRC joining a field of 700 from completing the race, with huge improvements made by many; Veteran, Nev Chamberlain improved on his 2015 time by 9:31 with a speedy time of 2:38:06 and Holly Durham taking over 5mins off her 2014 time with 2:18:52. Six members ran times good enough to score over 70% on WMA grading system with Chris Limmer 1:59:39, Nick Rossington 2:15:45, Mark Wilson 2:16:50, Catherine Payne 2:21:35, Robert McArdle 2:23:33 and Sarah High 2:43:30 all achieving the county level standard. Other results were; Ruth Dunstan 2:50:58, Louise Payne 3:10:16, Gavin Meadows 2:12:38, Paul Rushworth 2:13:46, Andrew Pask 2:14:10, Scott Jones 2:29:17 and Nick Payne 2:29:17. 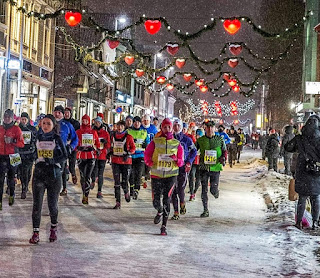 Grantham Running Club's Andrew MacAllister joined an international field in the Arctic Circle for this years Tromso 10k. With no daylight that far north the race starts in darkness at 15:00 on packed ice running through the Norwegian city's streets. With special ice grips on his running shoes and in temperatures of -8, Andrew MacAllister ran an impressive 48:20. Andrew was later heard to describe the Norwegian city as one of the nicest places on earth.