After several months of lockdown and a gradually easing set of restrictions, Active Training World looked at their plans for a 10k race for 1000 people starting at 10am and realised that they were able to work within the current social distancing regulations to provide a race for half that many people by splitting into smaller groups.

The venue was Highfield Park in St Albans, which provided enough space for a car park and several socially distanced starting pens. The competitors were ranked by expected finishing time and set off in order, to minimise overtaking and to give space for social distancing; obviously this means that all times are recorded as chip times due to the gaps between runners.

The planning and organisation was very well done, with 300 people arriving and collecting numbers in advance of a 9am start, and the same number arriving after 9am for a 10:15 start. Once race numbers were collected, 6 large pens were provided in the event field, in which runners warmed up and had their final instructions before making their way in groups of ten to the start.

The advance preparation was assisted by a very comprehensive written race briefing and a slightly waffly 13 minute video presentation that was sent to all competitors in advance. It looked as though all the runners were aware of these documents and there was no confusion during the start process.

Two runners from Grantham had the early start for the 9am race, Matthew Williamson and Peter Bonner. Matthew was looking forward to the race because, although he had been injured in March, he had used the lockdown period to train very hard and wanted to see how much he had improved. Peter was less positive about his prospects, saying that he was looking forward to racing after 5 months off, and that this would give him a true benchmark that could be built on in future races.

The course initially went across the grass, then onto a track and round to a road, before joining the Alban Way, which is a tarmacked old railway and formed the majority of the route. The only problem with the route came from Peter, who was at the head of his group and who briefly went the wrong way at the first path crossroads because a photographer was stood in front of the turn left sign whilst the runners were dazzled by the low sun. Other than this, the route was clear and well-marshalled, with a lollipop route for the first 3km, then a turn past some houses and along a pavement alongside the A414 and A1001, before returning to the Alban Way at 6km and following it past the turn to the finish. Weather was perfect, although there was a bit of a strobe effect from the sun on the outward stretch and those with tiring legs realised that the wind and the slight incline were against them around the 8th kilometre.

Matthew, who is a second claim Grantham Running Club member, ran the course in 36:34, which is a massive 1 minute 14 seconds personal best. Afterwards he said that he was thrilled with the result, that the course had worked really well for him and that he was really glad to have made the journey down to St Albans. Matthew finished in 40th place, overtaking people compared to his race number of 49.

Peter is a first claim GRC runner and he finished in 43:40, which was a slight disappointment after suffering from a recurrence of a sinus problem. However, he was pleased to have raced and looks forward to doing better in his next events.

The fastest runner was Ollie Garrod of South London Harriers in 32:02, with the fastest female being Hannah Rayden of St Albans AC in 33:36. The total number of finishers was 567. 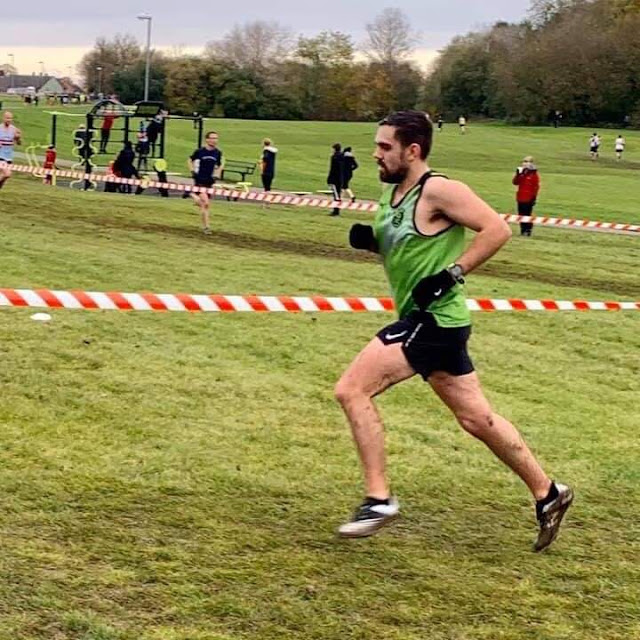 Round 1 of GRC’s Virtual Series 2 has drawn to its conclusion and some new names appear at the top of the leaderboards. Runners were given the usual two week window, now having a feeling for where their fastest miles can be run and results reflected that.

The standout performer was the overall winner Matthew Williamson with an outstanding 17:14, some 40s quicker than his official PB. Running 2 ½ laps of the Manthorpe Estate, Matthew running for his 2nd claim club ran well beyond his own wildest expectations to take the overall series lead. Next was Joe Diggins with another leap in form, smashing the 19min barrier with his 18:34 during his effort up from Welby.

In the ladies category there was a new winner with Hannah San Jose taking the title. Now with her recent injury worries behind her Hannah smashed her official PB time by 13s with an impressive 22:15. Next was the ever improving and GRC’s club member of the month for June Naomi Jepson-Rivers, beating her official PB yet again, clocking 22:49.

Further down the field there were standout performances from Alan Carley ( 20:46, VM40 winner) and Keith Measures (24:25).  Both men very familiar with the distance ran their fastest 5k’s for over two years and reached a county level standard for their age grade.

Other Round 1 category winners were:

The next event in the series is the 5 mile where runners will have to give more consideration for stamina and is sure to provide a good test for club members.