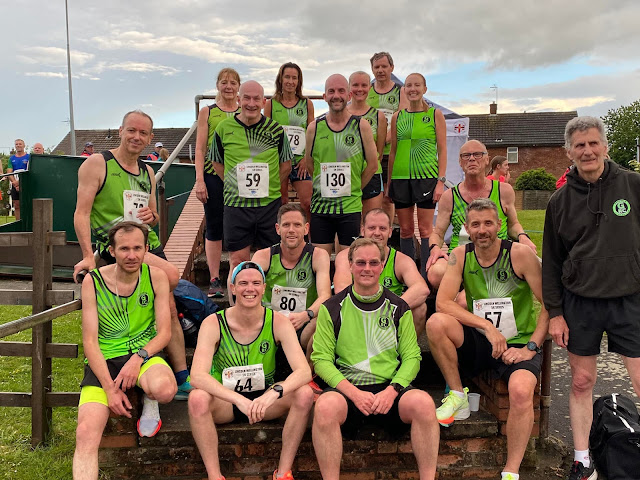 Grantham Running Club turned in an impressive array of results on Tuesday 31 May 2022 as sixteen members took part in the first round of the Lincoln Wellington 5K series and supporting Memory Mile, which made a welcome return to the local running events calendar after a two year hiatus.

The race formed part of Grantham Running Club’s Grand Prix Series, the seventh event in a series of twenty-three official fixtures, where members’ top six age grade results contribute to an overall score. Expectations were high as members travelled to Lincoln to participate in the fast, flat, four loop course, known for its high quality field of participants. Driving rain hampered the runner’s journey’s to Lincoln, miraculously clearing in time for the start of the Memory Mile and the near perfect race conditions continued throughout the evening, facilitating a mammoth ten Personal Bests, and six Seasons Bests from members.

The first of the sixteen runners home was Samuel Jepson, continuing his upward trajectory in a mind-blowing 16:49 and 14th place overall. Sam was closely followed by teammate Joaquim ‘Flash’ Jeronimo in 17:08, with another PB and impressive age grading of 79.67%. Sam Dodwell came in next in 19:10 securing a 1:09 personal best against his 2019 5K time. Two of the most notable performances from the male club members came from Stewart Pick, achieving his first sub 20:00 5k time and an age grade of 79.13% and club stalwart Rob Howbrook achieving an awe-inspiring 80:61% age grading and an age category win. Stefan Latter and new club member Daniel Pearce also enjoyed continued success with sub 21:00 personal bests with Peter Bonner, Robert McArdle and Paul Jepson all securing seasons bests and 70% plus age gradings. Club Chairman, Andrew Pask ran an impressive 19:43 time, but couldn’t quite match his performance at the Nos Galan Races in 2019.

The Club’s ladies also enjoyed remarkable results, with all four female runners achieving personal bests and upwards of 70% age gradings. First home was Holly Durham in 20:34, who ran a difficult race, achieving a hard fought three second PB. Holly was followed by sister Penny Hodges with an unexpected 41 second personal best of 20:59 and highest age grading to date. Third club lady home was Michelle Parczuk who acquired a hard fought 25 second personal best. The performance of the day arguably came from the irrepressible and ever improving Sarah High, securing another age category win and 1:07 minute personal best of 25:25.

Lincoln Wellington AC dominated the top of the results table, with Ronny Wilson winning in a time of 14:50 and Lindsay Skinner from off the Coach Fitness winning the ladies race in 17:15.

The Memory Mile attracted three GRC runners in a field of nineteen, with Peter Bonner coming in as the first club member in a time of 5:46, just ahead of teammate Robert Howbrook in 5:59. Resilient Robert McArdle was third club member home in an impressive 6:43.

The mile was won by Cameron West of Lincoln Wellington AC in 4:43m with unattached Selina Scott the winning lady in 5:39. 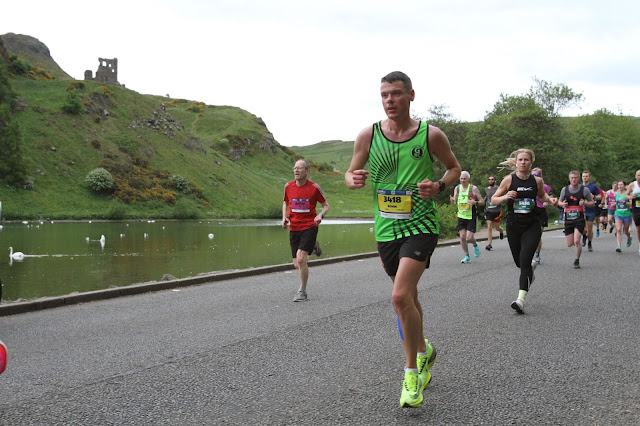 On the 29th May, after months of training, Grantham Running Club’s Robin Atter made his way to bonny Scotland to run the Edinburgh Marathon.

This was Robin’s debut at the distance, and he was blown away by the atmosphere which was unlike anything he had experienced at other races.  The start was amazing, with prestart music and a count down. All the runners were clapping, and emotions were running high.

After a strong start, the Robin hit the infamous ‘wall’ which left him feeling sick. But a fellow runner saw him struggling and said he felt the same.  They decided to run together and got each other to the last half a mile, at which point he tapped Robin on the shoulder and said “keep going I'm done for but you got this in you to run it”.  Robin commented that he will never forget how a complete stranger helped so much.

He met loads of runners over the weekend and whilst he may never have felt so ill after a run, it’s a memory that will stick with him for ever.

Robin’s finish time was 03:36:13 and he has no doubt that the support on route was fantastic and kept him going.  He also credits the training guidance he got from Grantham Running Club coache Chris Limmer.


Proving once again that runners love a mad challenge, Grantham Running Club held their first ‘canalathon’ on Saturday 28th May.  The slightly bonkers idea was the brainchild of Chris Limmer who organised the event with the aim to run all the way from Nottingham Railway Station along the Grantham Canal, a distance of some 33.5 miles. Joining Chris for the whole distance were Caroline Davis and Kate Marshall.  Chris and Caroline Davis are both experienced ultra-runners and are used to the physical demands of prolonged time on their feet but for Kate it was to be her longest run ever.

The three weren’t alone in their endeavour, however, and gathered club mates at various points along the way.  Runners were able to use an online tracker to arrange when and where to join up with the three and the numbers swelled throughout the event.

Having started at 8am, the first hour or two were punctuated with walk breaks to conserve energy so that they could enjoy the later miles with club mates. Before long the intrepid trio were joined by Dale Towning at Cropwell Bishop who would be on bike support which was to prove invaluable later in the day as legs and minds became tired.

This next section was arguably the toughest mentally for the three running the whole canal and there was a feeling of relief when they finally made it to Harby with 19.5 miles and over 3 and half hours on their feet. At this point the 3 runners and a cyclist were met by several other GRC members. For Kate, seeing her husband Fraser and many familiar faces certainly gave a much need mental boost with at least another 13 miles to go before the finish.

Alongside Fraser they were joined by Simon Allsopp, Penny Hodges and Sarah High for the next section to Redmile. Of course, in any long-distance challenge there are obstacles and unexpected things which can stop forward progress in its tracks. The canalathon was no different and somewhere between Harby and Redmile it was a local Swan with its new-born cygnets that made its unhappiness to the runners known. Thankfully Dale used his bike to help shepherd it away while the runners nipped by.

Upon reaching Redmile at 24.5 miles, what had started as a 3 became 11 as another group of members joined. With more than 5 hours running since leaving Nottingham station this was a much-needed bit of rest. An hour later the throng swelled further when they passed Woolsthorpe and met the final group of runners. 11 suddenly became nearly 30 and having posed for a photo and made the most of the chance to rehydrate and take on some much-needed calories they set off for the final 4 miles of the canal. Runners chatted away and were all in good spirits despite the many miles run. With moods lifted and legs re-energised those on tired legs suddenly felt lighter knowing that the finish line was now less than an hour away.

GRC chairman Andrew Pask led the faster runners home to the finish at the start of the canal. He was soon followed by a trickle of runners that quickly became a steady stream of athletes many of whom had run further than they had before or had for some time. The final group which included Kate was given a resounding cheer from everyone else as she finished her longest ever run over 7 hours after getting off the train at Nottingham station. All members were wholly complimentary of the event, and many are already looking towards a possible repeat next year.