Round 11 of the club championship saw Grantham Running Club's Matt Williamson celebrated another PB as he slashed almost seven minutes off his 2016 time for the Heckington 10. Returning to where he ran his first ever race in the green and black exactly 12 months earlier he was able to use his experience to pace his run to perfection. Just behind him was Rob Howbrook who paid the price for a very ambitious start and found himself tightening up in the second half to finish a minute astray of where he would like to be. The final member of the GRC trio was Nev Chamberlain running in memory of his father, now back to something like full fitness Nev was able to get within 30 seconds of his fastest ever 10 miler. Speaking after the race Matt said "This is a great race, no wonder it sells out so quickly every year"

Peter Bonner bagged his first ever 70% score by going sub 20 at the third 5k in the Lincoln series just behind Rob Howbrook who enjoyed yet another performance in excess of 80%. Peter is currently in the best form of his running career with this race coming just 48 hours after setting a best ever gun time in the 10k at Bedford on Sunday. Although he has over 220 parkruns under his belt he has never got within a minute of this time at any of them. He also picked up an age grade ranking for this run. 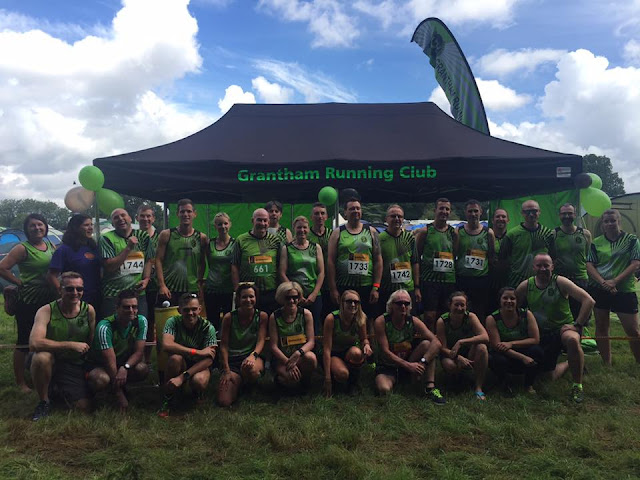 Grantham Running Club members braved the rain to take part in TR24 at Catton Park, South Derbyshire. The festival type 10km off-road relay event runs continuous from 12:00 on Saturday through to 12:00 the following day. With three mixed gender teams of 8 and a team of 5 with the addition of 3 solo runners the club sent its largest contingent ever.

This year’s event started in glorious sunshine but that was soon to change as the rain started shortly after and continued for 16hrs turning the undulating cross country course into a ‘mud bath’. The course by 12:00 on Sunday was virtually un-runnable but that didn’t deter the GRC members who had continued in their pursuit.

Three members decided to tackle the whole 24hrs solo with Gav Meadows and Paul Davis each completing in excess of 100km in the muddy conditions. As a late entrant Paul did not have time to fully prepare for a race for which he is ideally suited but he kicked off with three rapid laps before taking a short break followed by single lap later then dark lap before retiring for the evening, his five Sunday morning laps made up an eleven lap total placed him 21st Solo Male. Another strong contender in the Solo Male category was Gav and although running well just did not feel that he could give this race his usual 100%. He spun off five laps in a row on Saturday afternoon before taking a break and returning on Sunday morning to complete his planned ten placing him 33rd. The final Solo Male was Gordon Geach who completed two laps on the Saturday afternoon and one on the Sunday morning to finish 68th.

Despite the torrential conditions, the fastest team of 9 named ‘Grantham RC Blood, Sweat & Beers’ ran an incredible 28 laps placing them in 8th place of 226 teams. Team captain Andrew Pask selected the fastest runner available to join him as they targeted the highest position possible. He had a strong starting trio with Richard, Arthur and Andy all going sub 40 in recent 10k’s. His other choices were compromised with Scott only returning from holiday 24 hours before the race, Dean being ill, Rushie injured and Chris Limmer having to take it easy after a few weeks out. Richard led them out trying to get a lap done before the mass start cut up the course too badly this put Arthur into space which he made the most off, setting the fastest lap of the team with a 43:27, the only person to break 44:00. Andy managed to keep the team well up on the leader board where they stay all the way through not only due to coping well with the changing condition but not having any weak members. As the conditions became worse underfoot Scott had to loan his shoes to other runners to keep them upright! As the underfoot condition became impossible on Sunday morning there was actually some relief that there would be no 29th lap for the team as they had ran out of people fit enough to run it

Followed by ‘GRC #DBS’ with 20 laps in 138th. This team was made up of eight members, four of whom were new to this type of event while only one member had run this event previously. With the first few laps completed in the dry the team spirit wasn't dampened by the rain that then started,  and running passed the campsite gave a great lift in morale. Sam had the fastest lap for the team just as the rain started. Rick quoted "I've no idea how the hills work here, but there seems to be more up than down!!"
The team ran consistently well through the night and the rain, despite Louise and Victoria having torch malfunctions. Sara and Rachael continued to run well as they returned from injuries.Lizzie had the honour of running the final lap of 20 for the team. As the sun finally decided to show running into the finish area brandishing the GRC flag.

Whilst Ros was packing up she tried to drum up support to gather a team for another 24 hour event later in the year.

The team of five presents the biggest mental and physical challenge of all the team sizes as the fastest way to run it is in single laps which means you have to get loose five or six times and you have the shortest break between laps. The lead runner was Matt targeted with getting the team into a gap while at the same time holding back enough energy for future laps which he did actually going faster on his second lap than his first. He was to eventually complete six laps on his debut. Next off was Catherine Payne clocking the fastest lap by a female in the club on her first lap who like the rest of the team did five laps, down on last year’s seven when the weather was kinder. An ankle injury hampered Robert while Mark’s good built up to the race was to an extent nullified by a chest cold that prevented him getting the absolute maximum out of himself. Struggling with a back injury Ben wasn’t able to make his stamina count as he normally would. Taking into account the injuries the team punched above their weight and were only two minutes away from sixth place.


‘Despite the insane state of the course, the atmosphere was incredible. With whole families coming along to support, the mood in the camp remained positive in tough conditions. The noise as members ran past the camp was at times deafening with drums and loud speakers all aimed at giving runners a much needed boost. I’m already thinking of next year.’ quoted Andrew Pask.

Despite the extremely challenging conditions, the team building event was deemed an outstanding success for the club with everyone leaving with a strong sense of achievement and thinking about 2018 already.
Posted by GRC at 22.7.17 No comments:

The Stamford leg of this series attracts the fewest runners either because it is so far out of the city or because it is not as fast a course. As prizes are awarded on cumulative positions rather than time this makes the race very attractive to those aiming for the season end's prizes. On a course not suited to him Rob Howbrook struggled to find pace and was surprised that his time of just over 20 minutes was good enough to give him his fourth straight age category win in the 2017 series. A powerful performance from Peter saw him almost match his PB set in Lincoln a few months back on a flatter faster course. Jaime set the bar high with a sub 21 first ever 5k.

Catherine Payne took it easy as this race was sandwiched between a race last weekend and the TR24 in which she will be expecting to race 6 laps. There were solid performances from Robert and Nev coming in roughly where they expected.

Suzy Britz set a PB going below 25 minutes for the first time and Helen Brown, on her debut, was less than a minute behind.


On Sunday six members of the Grantham Running Club traveled  to St Ives in Cambridgeshire for the 25th annual race of the St Ives 10K.
A record field of nearly 600 runners were met with warm humid conditions and a stiff breeze making conditions far from ideal for running.
The course is an undulating 10K out and back course with a steady long incline leading up onto the top of the windswept airfield which affected the pace of many of the runners.
First Runner  home for Grantham was Catherine Payne in a time of 45.46 giving her first place in the FV50 category. Catherine said "that she was pleasantly surprised to finish first in her age category as she was not feeling 100% before the race". Hot on her heels in a time of 47.21 was Robert McArdle shaving a few seconds off from the previous year's race.
Ady Walker recovered to finish in a time of 50.12 after struggling to cope with the windy conditions on the airfield, just a few seconds outside his PB set on a much easier day.
The next three  Grantham runners were all graduates of the clubs successful 10 weeks to 10K 2017 course Julia Hallam lead the trio home in a time of 1.04.35 with Julia  saying that she " is determined to break the 60 minute barrier before the end of the year"
Claire  Fritz came home in a time of 1.13.04 despite suffering stomach cramps at 6k race and describing it as her hardest race  so far.
CJ Walker completed the Field of Grantham runners in a time of 1.16.44 after suffering from a reoccurring injury in the very early stages of the race despite this she was determined to finish to pick up a "bit of bling" at the finishing line.

All of the Grantham runners enjoyed  the challenging course and said that they look forward to next year's event.