Two of Grantham Running Club’s endurance runners took part in last weekend’s Cambridge University Hare and Hounds Club’s Boundary Run to sharpen up for the April road marathons. This 26.2 mile route traverses roads, footpaths and trails, and incorporates some beautiful and not-often-seen areas of the city. It has about a third of the distance a very muddy off road and there are several reasonably sized hills on the course - significant enough to surprise those who are used to the flat terrain of Cambridge. One of the highlights is always racing against the rowing eights along the banks of the Cam. With a record entry of just under a thousand runners taking part with the option of stopping half way both the GRC athletes opted for the full challenge. The strong wind was a bonus this year in drying some of the muddier fields to just merely sticky but on the flip side there were several fallen trees blocking the normal route as well as branches all over the footpaths.

Despite the race coming at the end of another hard block of training and run as a carbo depleted exercise the GRC pair were able to stick to their planned pace working their way through the field especially in the final two miles as others faded to finish in 78 / 79th places. Catherine’s time was 3:47:15 with Robert clocking 3:47:50 which was a few minutes inside their 2016 times.
Posted by GRC at 26.2.17 No comments: 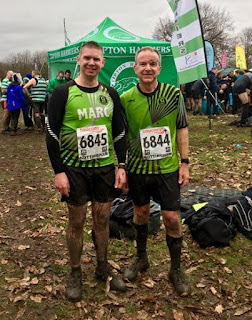 The Saucony English National Cross Country Championships attracted 8,116 entries for its return to Wollaton Park in Nottingham, up 5% from the previous visit. Grantham Running Club were represented by two senior men, Marc Tremain finished in 69:33 closely followed by Andrew MacAllister in 69:38 in what is regarded as one of the toughest events in club running. The event is a hilly, muddy, three lap course including a few knee-deep boggy sections on each lap. Rain immediately before the race ensured the pair got suitably muddy in the slippery conditions. After eight miles of hard running the pair finished in closeconvoy,
Posted by GRC at 25.2.17 No comments:

Eighteen hardy members of Grantham Running Club took on the Belvoir challenge, a 15 or 26 mile cross country race through the vale of Belvoir which promised lots of mud and a few hills too. In the 15 mile event Matthew Williamson continued his fine form coming in first for GRC in 66th in a fantastic 2:19:56. First lady in was Penny Hodges who ran it as part of her continued build up for the London Marathon and came home 129th in 2:37:46. The cake stops on route lightened the mood among the other runners on course as they battled the mud and afterwards there were many remarks about one particular muddy hill at six miles in.

Meanwhile in the 26 mile event Chris Limmer was first home for the club. Starting nearer the front and seeing how the race unfolded he was catching up with 2nd only to take a silly wrong turn around the 13 mile point and dropped to 7th. Thankfully he dug in and reeled the other competitors in and had to dig in to keep hold of his 3rd place in 3:34:13. First lady in for Grantham was Sj Willis whom much like Penny enjoyed the mud and scenery who herself was building up to a spring marathon. Sj ran it alongside seasoned marathoner Gav Meadows whom completed the final part of his challenge of 12 marathons in 12 months. Gav is raising money for sport relief and is hoping to raise £500. There were some fantastic perfomances and a real club spirit at the finish and on the course and despite the conditions many even said that they'd be there again next year.

The link to Gav's fundraising page is: https://www.justgiving.com/fundraising/gavs12marathons365 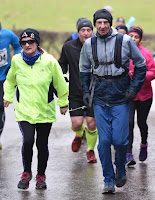 Members of Grantham Running Club continued their spring marathon work-up at the Stamford St Valentines 30k. This year the tough undulating course was made even more difficult by the freezing windy conditions but that didn’t stop confidence building times from being posted. In a race that attracts only serious runners, Gav Meadows was first home in 90th place with a PB equalling time of 2:12:36. Veteran, Rob Howbrook finished 6th in his MV55 age category in a time of 2:16:57 despite struggling over the last few miles. Catherine Payne finished an incredible 2nd in the FV50 category with 2:21:05. Also running strongly was Sarah High who finished 6th in the FV50 category with 2:39:56. Other notable performances came from Sinead McDonnell and Gordon Geach. Sinead, who stepped up from the half marathon distance for the first time was pleased with her time of 2:49:39. Birthday ‘boy’ Gordon, who made his debut in the MV55 age category, has returned to the marathon training scene after a few years absence. Paul Davidson once again acted as a guide runner. Finishers were pleased to receive their commemorative long sleeve training top and a pack of Love Heart sweets. After the race Sj Willis joked that it was such a tough run, she’s now considering taking up Crochet as an alternative.

Two of GRC's runners took part in this year's Caythorpe Dash from the playing fields on Old Lincoln Road, the Dash is a Multi-terain half marathon challenge. Peter Bonner finished in 27th place in a time of 1:49:43 with Penny Hodges coming home as 10th lady in a time of 2:04:05.
Posted by GRC at 12.2.17 No comments:

Grantham Running Club’s Paul Rushworth completed the LDWA event the Anglezarke Amble in 4 hours 48 minutes despite snow on the peaks and a chilling wind making the sub-zero temperature feel even colder. The scariest parts we Winter Hill and Darwen Moor where it would have been dangerous to stop moving. The run included over 3,000' of climb. As always with LDWA events it was great value for money at £9 including the post-race dinner.


Five members of Grantham Running Club made the short trip to the Village of Rauceby near Sleaford on Saturday to take part in the Rauceby Ripper. The 8.5 mile mixed terrain race starts and finishes near the village hall and takes in various tracks, trails and fields on nearby farmland. The course offers a different type of challenge to most races and is definitely suited to cross country specialists and anyone who doesn't mind getting very muddy!
First to cross the finish line for GRC was Gav Meadows in a time of 1:02:55 (15th position overall) improving on his 2016 performance by almost 5 minutes. Gav was closely followed by Peter Bonner in a time of 1:03:49 (20th) also improving on last year's time. A remarkable performance and really highlighted Peter's talent for off road and cross country races.
Other results: Paul Davis 1:04:55 (23rd), Caroline Davis 1:22:27 (119th after also completing Belton House Parkrun that morning), Andy Barradell 1:43:05 (196th).