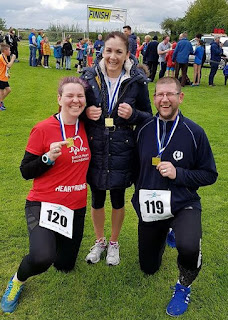 Grantham Running Club’s Louise Kennedy ran the Sturton Stride 5K on Sunday 29th April. It was organised by the local primary school and all the money raised went to the school. The event was well organised with group warm up, enthusiastic marshals, a huge digital clock at finish and commentary/music. There was a medal and goody bag for all finishers. Louise ran well, getting very close to her personal best with a time of 31:53.

Four runners from Grantham Running Club took part in the Orston Spring Dash on Sunday 29th April. Held in the Vale of Belvoir, the event is a 10k race on mixed terrain through the villages and lanes surrounding Orston in Nottinghamshire. 2018 was the fourth event and it normally takes place in the beautiful spring weather with a great atmosphere amongst competitors and volunteers. The atmosphere was still there, unfortunately 2018 was not quite the beautiful spring weather of previous years. However, the rain had stopped and conditions for running were still good. 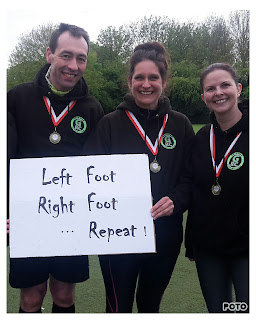 After starting in Orston, the route took in Flawborough, Shelton & Thoroton before a long straight to the finish near Muston just off the A52. One kilometre of the race was on a farm track. This caused some slipping and sliding due to the torrential rain over the days leading up to the event. However, everyone managed to negotiate this and avoided face planting in the boggy ground.

As a reward for finishing the race everyone received a medal, tea/coffee and homemade cakes all supplied by the volunteers of the event. Stuart Reader was first home for GRC with an impressive time of 47:19. Other GRC finishers were Gavin Skinner (54:43), Claire Fritz (68:33) and Julia Hallam (69:56).


Nineteen members of Grantham Running Club finished the 2018 Virgin Money London Marathon on Sunday 22nd April. With temperatures reaching 23.2C in St James’ Park, the 38th edition of the race was officially the hottest on record, making the already not insignificant task of running 26.2 miles markedly more challenging.  The legendary crowd support made the task slightly more bearable but ultimately it was for most runners, be it debut makers or seasoned campaigners, a race where just finishing was a fantastic achievement.
First home for GRC was Matthew Kingston-Lee, who paced himself well to finish 329th overall, eighty places better than twelve months earlier and his best ever placing at London.  He was also a highly creditable 60th in his age category.
“I knew within the first minute of the race that conditions were too warm for a PB effort, so I went off conservatively, picking up the pace gradually over the first three miles and thereafter aimed to maintain a consistent pace to the finish.” commented Matthew after the race. Going through halfway in 1:23:20, Matthew hardly slowed at all in the second half of the race, coming home in 2:47:27.
“The conditions made it incredibly hard going and honestly I cannot say I enjoyed the race, although the crowd support was immense, as always. Given the conditions I am very content with my time, even if it was six minutes slower than my PB.” Matthew continued.
Next home for GRC was Holly Durham who put in an equally determined effort to clock 3:22:26, placing her 293rd in the women’s race.  Holly stated after the race: “Not a PB, but I’m fairly pleased with my time considering the heat. By mile ten I knew it wasn’t going to happen which took the pressure off and meant I could just enjoy it!”

Second claim GRC runner Mark Wilson finished in 3:35:03. Like Dean Riggall, who finished in 3:35:27, Tony Johnson (3:36:44), Gerry Hyde (3:49:37) and many others on the day, they suffered particularly in the second half of the race, mainly due to the heat.  Dean’s wife Julie, taking part in her first ever marathon, ran well to clock 5:31:02.
Mark Hillson, perhaps mindful of his temperature related collapse at the 2017 Manchester Marathon, abandoned any thoughts PB attempt before even starting and ran a superbly judged, even paced, race to finish (upright and walking!) in 3:53:04.


Penny Hodges, who described her London Marathon as ‘horrific’ and was ‘glad just to finish at all,’ suffered from a fast start and the cumulative effects of the heat. Despite being physically sick shortly after halfway, Penny battled on resolutely to break four hours, clocking 3:56:36.
Nick Rossington, running with his son Charlie, finished in 4:06:32, but more significantly raised over £11,000 for CLIC Sargent, who supported Nick’s daughter Alice and the family during her battle to overcome bone cancer. Describing the atmosphere as ‘electric’ Nick reflected the stark contrast to the stifling heat of the day compared to training in the coldest, longest winter in living memory. Julie Gilbert and Rachel Pattison also completed the London Marathon in support of CLIC Sargent, raising just shy of £4000 to date. Running together from start to finish, they both finished in 6:25:37.
Following Nick, Liam Vincent was the next GRC finisher in 4:33:39. Jason Walker, running his first marathon, chose to do so in costume as Deadpool , raising funds for Hospice UK. His finishing time of 4:48:40 is an hour or slower than he will run in more suitable attire and with better conditions, but his efforts and those similarly dressed are part of what makes the London Marathon so special as an event.
Wayne Baxter, competing in his first marathon, ran a fine race to finish in 5:05:22. Marc Tremain, running his second ever marathon, suffered badly in the conditions, but did manage to break his old PB by two minutes with his 5:41:02 clocking. Based on other recent performances Marc can look forward to smashing that time by well over an hour.

Amanda Mumby, who ran to raise funds for Marie Curie, was the only other GRC runner on the day to clock a PB. Running the second half of the race almost as fast as the first and speeding up from 30K through to the finish, Amanda took an impressive 16 minutes off her previous marathon effort, clocking 5:57:58. Suzanne Angeloni, taking part in her first ever marathon, was soon to follow in 6:02:00, with another debutante Beverley Toon, finishing just a few minutes later in 6:15:05. They both took part raising funds for Phabkids.
Last, but by no means least, to finish for Grantham Running Club was Rebecca Jones. Becks, raising funds for NSPCC, was not in the best of shape to take part in the race, but having already deferred her entry in 2017, was aware that this may be the last opportunity to take part in a race that is hugely oversubscribed. Finishing hand in hand with her supporting husband Scott, she can rightfully claim that she successfully finished the hottest ever London Marathon to date! 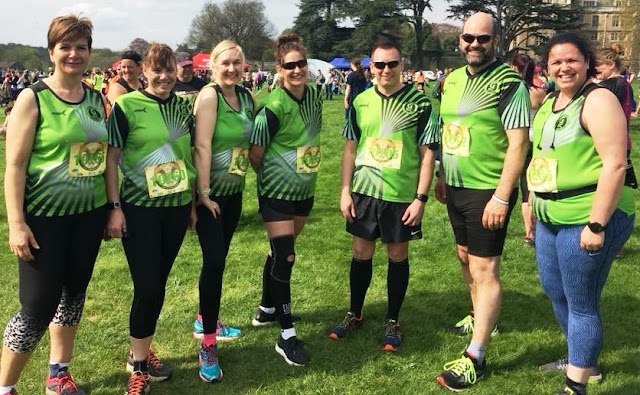 Grantham Running Club came out in force for the Longhorn event at Thoresby Hall on Sunday 22nd April. There was the choice of 5k, 10k, half marathon, marathon or 60k and all included a canicross option (running with a dog). The routes were within a private area of Sherwood Forest and the beautiful grounds of Thoresby Hall. Weather conditions were very hot, making the races enjoyable if a little challenging for everyone.

Nick Payne was competing in the 60k ultra race which consisted of six 10km laps. He finished with a creditable time of 6:32:18 averaging just over 1 hour 5 minutes per 10km lap. He placed 16th out of 44 competitors and added another ‘marathon plus’ event to his ever growing impressive list.

The majority of GRC participants took part in the 10k which had to start in waves as there were 565 runners altogether. Stuart Baty was first home in 53:37 closely followed by Gavin Skinner in a time of 54:49 with Suzanne Britz first GRC lady back in 55:31.

Two members took part in the 10k canicross race. Hayley Staff (61:39) and Lucinda Gamble (79:22). Both runners and their dogs enjoyed their debut at this type of race and will be entering more canicross races in the future.