Records tumbled as ten athletes from Grantham Running Club took part in the final race of the Peterborough Grand Prix season, not only were personal bests at stake but this was the decider for the prizes for the best 5k runners in Cambridgeshire and the surrounding area. With conditions better than expected Jonny Palmer set the fastest time ever for a GRC member with his best 5k to date in a time of 16:21 surpassing his 2016 mark by some 17 seconds. As if to show that there is no such thing as a specialist distance is club road running Jonny is also GRC’s fastest over the marathon and the 100 mile distances. Next home was Peter Bonner taking part in his 5th  5k in 5 days clocking 19:10 on heavy
legs. Not far behind in 19:28 was Rob Howbrook having already tied up his series win some two weeks previously and despite two races in Lincoln the previous evening he held on to secure the clean sweep in his age category with first MV60 at all five of the Grand Prix races. On countback he was awarded the Male Vet 55 prize as he was also faster than all those in the age group below his.

First of the women from the club was Sarah Chynoweth lowering her own club record by 16 seconds with a 19:30 which secured her the spot for 3rd lady on the night. Sam Dodwell is having a great season with a PB almost every second time he races and it is a mark of how much he has improved that his 20:53 was just “a good run” despite being about four minutes faster than the same point in 2018. With the gap between Catherine Payne and the second placed runner in her age group a mere five points Catherine had to finish no more than four places behind her rival to secure a series win to match her positions in 2016 and 2017. Despite not being able to race at full pace due to illness Catherine also managed another win in her own age group but was awarded the Female Vet 40 prize as her positions were better than those in the two groups below her.

Robert McArdle’s time of 22:31 was about where he normally is but Naomi Jepson-Rivers matched a PB set a few weeks previously to the second leaving her wondering if there was anywhere on the course she could have shaved that second off! Stuart Baty had a great run and was rewarded with a 15 second PB in an official time of  23:56. The club’s final runner home was Paul Jepson in a painful 25:46 with a pulled hamstring picked up in a 10k cross country race a few hours previously. 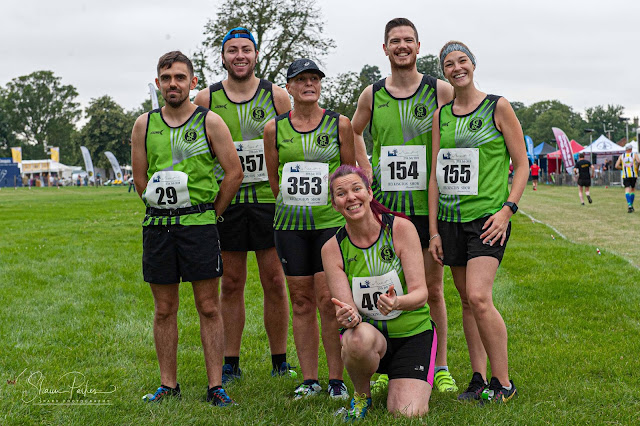 Nine members of Grantham Running Club took part in the Heckington 10 Mile Road Race on Saturday 27th July. First held in 1965, the 54 year old event is considered to be the oldest running race in the Midlands. It forms part of the Heckington Show, the largest village show in England, which was celebrating its 152nd edition in 2019. The show’s main ring, where the 10 mile race starts and ends, is packed with activities over the two days of the show – Saturday alone seeing athletics races, grass track cycling events, a parachute display, horse board racing, and much more.
The race, which sold out months in advance despite increasing the number of places available by 30%, has seen itself quietly modernised by introducing measures such as chip timing and fully closed roads whilst retaining the feel of an old fashioned village show race. The £600+ prize fund ensures a high quality field year after year especially in the veteran categories.
Having traditionally taken place in the mid afternoon, the race moved to a 9:30 start this year. This would have been an inspired move had the record breaking 36°C temperatures two days prior continued into the weekend. As it was the mercury through Saturday barely reached half those figures and while the race got off to a good start with a double lap of the arena, shortly after heading out and through Heckington itself a torrential rain storm began that was to last all the way through the race and indeed much of the weekend. The accompanying wind proved to be the biggest hindrance to runners; the combination of both wind and rain proved to be extremely challenging for the volunteer marshals and organisers, and unpleasant for those attempting to spectate. The conditions and the change of start time may have contributed to some issues that created a confusing and sub-optimal finish experience for a small number of runners, including a member from GRC. Organisers have already stated they will look to address these issues for the 2020 race.
Joe Clarke was the first Grantham Running Club finisher in fourteenth position overall. His time of 63:51 was impressively only fourteen seconds down on a PB set when he did not have to contend with heavy rain being driven into him by strong headwinds on parts of the course. Matthew Williamson was next home in 66:12. Returning to one of his favourite races less than a week after completing six gruelling 10K laps at the Thunder Run 24 Hour Race, it was no surprise that his legs were a still a little fatigued.
Next in was the experienced Rob Howbrook in an excellent 67:57, picking up the prize for first MV60 in the process. Making his debut at the distance, Sam Jepson-Rivers was delighted with his time of 69:54 as it represents a positive marker in his goal to run a sub 90 minute half marathon in 2019. Not far behind was Jack Dodwell, whose 71:39 reflected that last week he too completed five laps in GRC’s fastest team at the TR24.
First lady home for GRC was Holly Durham, for whom the ten miles was exactly 10% of the distance she is training for in preparation for an attempt in the autumn to complete 100 miles within 24 hours. Despite many miles in the legs, her time of 73:19 was good for a fine tenth place in the women’s race. Like her husband Sam, Naomi Jepson-Rivers was also making her debut at this distance having never raced further than 10K before. Achieving 88:46 was a huge confidence booster encouraging her to look at even longer distances in the coming months.
The GRC performance of the day came arguably came from Tracy Webb who nabbed a PB of 98:24 despite the wind and rain, which strongly suggests her current half marathon PB could be under threat this autumn. The final GRC finisher was Louise Kennedy, who was also making her 10 mile debut and came home in 1:55:19.
The winner of the race was Aaron Scott of Helpson Harriers, who cruised to victory in 53:12, allowing himself the luxury of an extra 45 second loop in the race yet still won by over four minutes. Emma Hodson of Cambridge University Hare & Hounds was the women’s winner in 60:45. There were 326 finishers.
Posted by GRC at 27.7.19 No comments: 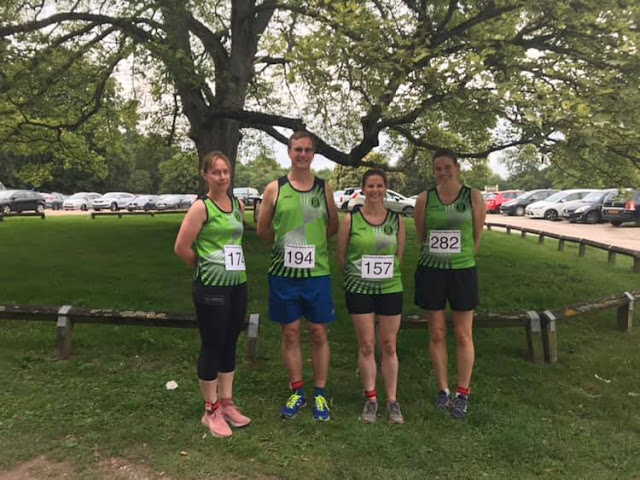 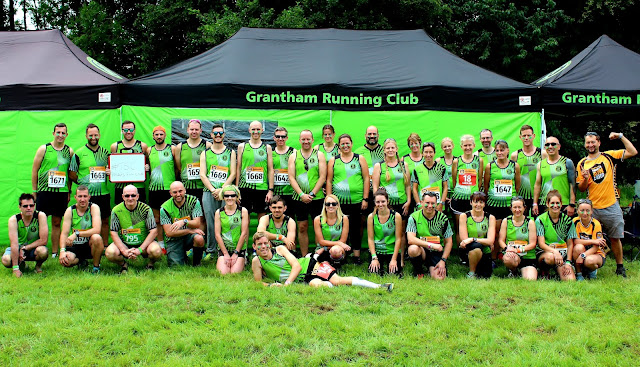 Grantham Running Club had over forty athletes taking park in this year’s 24h Conti Thunder Run at its regular venue Catton Park, Walton on Trent. The Conti Thunder Run is an off-road 10km relay race against the clock. It’s tough and mentally challenging to all competitors whether they’re running solo, in pairs, team of five or large teams of up to eight as they continuously run around the most technically demanding cross country route
from noon to noon. The final glory lap is the reward for any runner if they can begin before the clock strikes twelve.
Top placed finisher for GRC was one of the club’s founder members, Paul Davidson, known more these days as a guide runner for visually impaired athletes he turned back the clock to power to fifth place in the mixed pairs with nine laps including setting his fastest lap some 23 hours into the race to beat the 12:00 cut and earn an extra lap.
In the solo category the stand out performance was from Caroline Davis whose 11 laps placed her 10th in the female solo category. There were three of the club’s members in the male solo category, with Adam Wasiolka logging an impressive 10 laps over the 24 hours, Chris Limmer completed six in just under eight hours before retiring and Stuart Baty completed three laps on the Saturday and followed it up with another lap the following morning.
The mixed team of five was led out by Matt Williamson and finished in 10th position. They managed to record 26 laps. Matt clocked the fastest GRC lap of the weekend going sub 43 minutes in his first lap. It’s is a measure of how tough this course was even in the dry that this time was around five minutes astray of where he would be on the road. His sixth lap was going to be his toughest through fighting against fatigue and the noon guillotine to hand over to GRC’s fastest female runner, Catherine Payne for her sixth lap to move the team into the top ten for the first time in the race with over 24 hours elapsed.
GRC’s fastest mixed team of eight was led by Andrew Pask and recorded 28 laps (17th position) with Sam Clark recording their fastest lap and Jack Dowell finishing the race with a brutal double lap in the heat.
Gordon Geach was captain of the second team of eight who managed 24 laps (37th position) between them narrowly missing out on the final lap as Grant Davies with his blistered feet, Gaffa taped back together and despite a lung bursting 45:18 last lap missed the handover cut-off by 6 seconds.
Dean Riggall’s team completed 21 laps with Dean who despite being ill all weekend managed the team’s only sub 60-minute lap as they finished in 110th place thanks to speedy 20th lap by Sylv Hull to hand over to Tracy Webb for the final lap to move them up four places.
The final team was captained by Sara Pask and completed 15 laps in just over 22½ hours to finish 176th in their category, their fastest runner was Edina Burns on lap two just as the very heavy rain started.
Posted by GRC at 20.7.19 No comments: 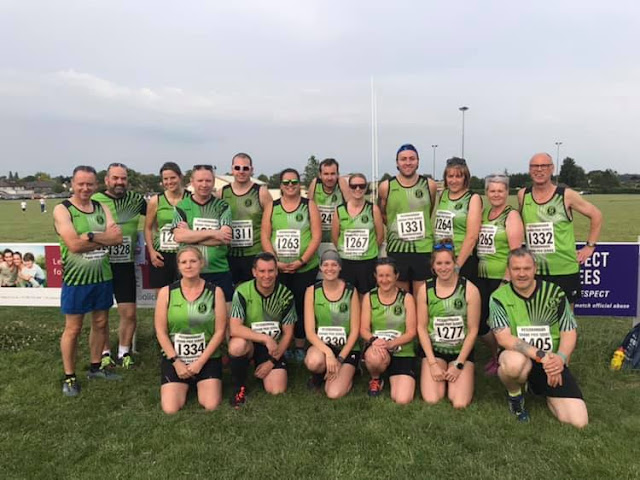 Four runners from GRC made the short journey south to take part in this year’s Thurlby 10k. Unusually for races in this area this one was not flat starting with a major climb up Swallow Hill out of the village and returning into Thurlby via Obthorpe Lane after passing through the villages of Manthorpe, Wilsthorpe and Obthorpe. This is a tough 10K for this area!

First back for Grantham Running Club was Dan Ancliffe setting a Personal Best to finish in seventh place with a time of 38:47, his 20 second PB was all the more remarkable as he had set his previous mark on a flat fast course. Next in was Sam Clark pleased with his 41:56 in a well-judged race which secured him 11th position.

Catherine Payne made the podium for the third time in three attempts to match her debut some ten years previously when she was also female runner up. Her 2019 time was 43:54, The final runner from the club was Robert McArdle in a Season’s Best of 48:23
Posted by GRC at 14.7.19 No comments: 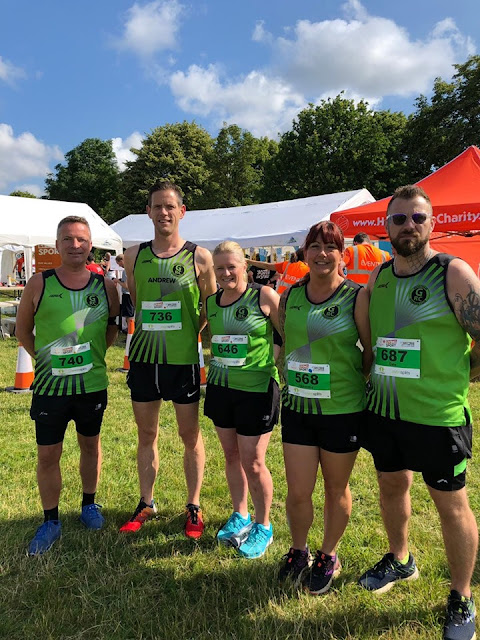