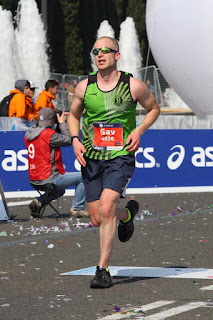 Grantham Running Club's Gav Meadows & Neil Emerson travelled to Catalonia for the prestigious Barcelona Marathon. The race was the culmination of a lot of hard training for both athletes & they each went into the race with high expectations & confidence that they would run new personal best times. The course is one of the flattest available in Europe & is perfectly suited to running fast times.
35 year old Gav maintained a pace of around 7 minutes per mile for most of the race & despite slowing significantly in the last 2 miles, completed the 26.2mile course in a new PB of 3 hours 7 minutes exactly. This bettered his previous PB by a whopping 16 minutes. He placed 1220th overall in a field of over 16,000 & finished 613th in his age category.
Gav said 'First of all I must say what a fantastic experience it was to be part of this incredible race. Emotions were running high from the moment we lined up at the start in the spectacular setting of Placa d'Espanya overlooked by the imposing Venetian Towers to the front & Palau Nacional to the rear. From the moment we set off the support from the crowd was incredible & although I didn't understand the Catalan phrases being shouted, they still drove me on more than I can put into words. There were also drums & music on just about every part of the course & it was a real buzz to run past sights such as the Sagrada Familia & Nou Camp Stadium.'
'I don't think I could've executed my race plan much better. My pace was very consistent for the vast majority of the race & the last 2 miles is the only part of the course where things went slightly wrong. I tried to increase the pace slightly for the last 3 miles using the speed I've developed from doing weekly parkruns - a strategy that worked very well for me at the recent Stamford 30K. I wasn't quite able to maintain it this time though. However, I was thrilled with my overall performance. My goal was to finish in under 3:15 & I achieved this comfortably.'
56 year old Neil's race was just as impressive. He crossed the line in 4 hours 7 minutes 25 seconds obliterating his previous PB by an incredible 18 minutes. Also when u consider that the first half of his race was 18 minutes faster than the second it's clear that, with further training & some race plan tweaks, Neil is well capable of going under 4 hours. He finished 11,082nd overall & placed 514th in his age category.
Neil said 'A perfect run. A beautiful, clear, sunny day. The course, which takes in most of Barcelona's iconic landmarks, was well supported by local people and bands. In fact I can't remember any part of the course without encouraging cries of "vamos!" and "animar!" ringing in my ears. It is truly an inspiring experience to feel part of.'
'Juggling marathon training with a busy work schedule is challenging. I find weekend "long runs" (17-21 miles) are fundamental to good performance. The routes around the beautiful Vale of Belvoir countryside with fellow GRC members make it (almost) enjoyable.' 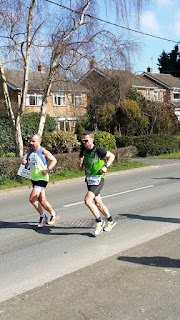 Grantham Running Club's Chris Limmer ran a near perfect race at the Ashby 20, finishing in 17th place just a day after winning the Belton House Parkrun. On tired legs after a heavy week of training, Chris' time of 2:05:02 far exceeded even his own expectations.  Chris, who's in training for a 50 mile ultra-marathon used this race as a training race along with 11 other club members who joined the large field of runners. This race, usually the last before the London and Manchester Marathons was run in unusually good conditions which helped club runners to produce some excellent times despite the undulating course. Mark Wilson was the next GRC runner home with and outstanding 2:21:56, good enough for 12 in his MV50 age category. He was followed by Ashby debutant Nick Rossington in 2:26:12, Paul Rushworth 2:27:33, Nick Payne 2:45:50, Andrew Spencer 2:50:20 and Brendon Buckley 3:49:08. Sarah High was the first GRC lady home with a standout time of 2:56:25 which placed her in 35 positions in the FV45 age category. Sarah was followed by strong performances from Lorna Fox 3:23:43, Louise Payne 3:26:26, Yvonne Buckley 3:49:20 and Wendy Tremain 4:18:56. 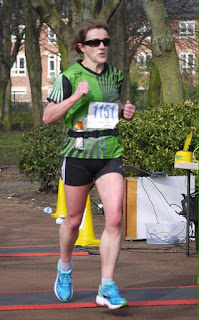 After Sunday's Locke Park 20 miler Catherine Payne is now ranked by UKA at number four in her age category over the that distance. Despite the race taking place only 7 days after she ran an off road marathon and a full week of club training sessions, Catherine posted an incredible time of 2:31:21. This gave her a WMA age grading of 78.63%, one of the highest ever recorded by anyone in the club for a race of over two hours, second only to her score at last year's London Marathon. Robert McArdle also completed the race with an impressive 2:34:22 (WMA 71.55%). 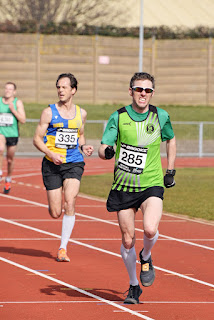 The 2016 Newton’s Fraction Half Marathon, Grantham’s only road running race, was an outstanding success for Grantham Running Club, with Matthew Kingston-Lee taking a sensational second position in a thrilling battle where the top four were covered by less than twenty seconds at the finish. Behind Matthew, there was an Age Category victory for Rob Howbrook, a number of PBs and personal triumphs for three graduates from the club’s 2015 beginners’ programme, who successfully completed their first Half Marathons.
Runner-up Matthew began the 13.1 mile race in bullish manner, briefly leading the field of over four hundred runners as they left the Meres Stadium. He spent much of the race in fourth position, keeping a close watch on the leaders before making an attack on the second of two tough climbs at Casthorpe eleven miles into the race. He came agonisingly close to catching the eventual race winner Adam Holland (Notfast RC), but looked as though he would have to settle for third place as they entered the Meres Stadium for the finish.
Spurred on by vociferous local support, Matthew summoned a determined sprint finish to take second place at the line, clocking an impressive 1:15:30.
“I’m thrilled to have finished second at my home event,” commented Matthew. “It was an exciting, tactical race that could have been won by any one of the top five finishers. The local support cheering my name around the course and at the finish was a real inspiration and undoubtedly helped me claim my best ever position in a road race.”
Behind Matthew, Rob Howbrook, in a superb 1:28:09, was the next to finish for GRC, knocking over a minute off his PB and taking first place in the V55 age category. Taking advantage of perfect race conditions there was also a PBs for Mark Wilson (1:30:50) and Nick Rossington, who took an impressive three minutes off his with 1:31:36. Sarah High was the first female GRC runner to finish, 1:50:04 placing her just ahead of Helen Brown (1:50:22) and ahead of Liam Vincent, who made his half marathon debut, clocking 1:55:47.
It was a special day for Richard Dobbs, Martin Carter, and Nicholas Jones who, less than a year ago, were scarcely able to run more than a few miles between them, yet all successfully completed their first half marathons in 1:54:11, 2:01:32, and 2:12:07 respectively. Martin paid tribute to Grantham Running Club’s Couch to 5k course, a ten week programme the three completed in 2015:
“I really enjoyed it, everyone was so supportive. Since I joined the club I’ve lost over a stone in weight and I don’t think I’ve ever been so fit. A year ago I never would have thought I’d be able to complete a half marathon.”
Grantham Running Club’s 2016 beginners’ programme starts on Monday 4th April 2016 at the Meres Leisure Centre. Further details can be found at the club’s website www.granthamrunningclub.co.uk/beginners
Grantham Running Club Results: 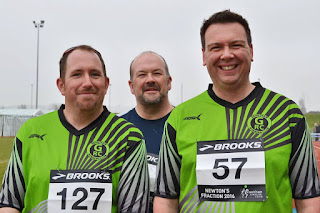 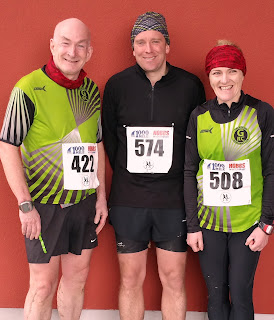 Three of Grantham Running Club’s distance runners took part in last weekend’s Cambridge Boundary Run to sharpen up for the April road marathons. This 26.2 mile route traverses roads, footpaths and trails, and incorporates some beautiful and not-often-seen areas of the city. It has about a third of the distance a very muddy off road and there are several reasonably sized hills on the course - significant enough to surprise those who are used to the flat terrain of Cambridge. The three athletes used different strategies to get the most from their day. Ultra-runner Paul Rushworth who was short of miles following a recent illness blasted the first half of the course to work on his speed and relaxed the final 13 miles as he concentrated on getting some time on his feet finishing in 3:43:43. Treating the event as a progression run, to aid recovery in next for next week’s race, Catherine Payne and Robert McArdle started steadily accelerating from the mid-point overtaking almost 10% of the field in the second half finishing at above the pace they would expect to run a standard marathon in. Catherine’s time was 3:52:09 with Robert clocking 3:52:25 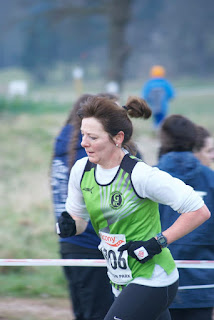 Grantham Running Club participated in the prestigious National Cross Country Championships at on Saturday. The very large field of 482 consisted of some of the very best runners in the country in both the Senior Men's and Senior Ladies races, this and the tough and testing course really demanded everything from the team members. Rob Howbrook put in another fine performance over the men's 12K course and was first in for GRC with a time of 1:00:1, followed by Andrew MacAllister in 1:10:9 and then Liam Vincent 1:14:27 and Neil Emerson 1:14:44. Unfortunately, Nev Chamberlain had to withdraw due to injury; hopefully not too serious. Ladies competed over an 8K course and were represented by GRC team captain Sarah High, finishing in with a time of 47:15 and Magaretta Murray in 1:01:21.

Members of Grantham Running Club took part in the Belvoir Challenge on Saturday.
The off-road event offered a choice of 15.8 mile & marathon (26.2 mile)
distances. It takes in the tracks, trails & fields of the Vale of Belvoir &
whilst being a tough test for any runner also offers stunning views & scenery
thoughout. In addition there were cakes & treats on offer at check-points along
the way. The event was thouroughly enjoyed by all who took part.

Taking on the longer marathon course were Chris Limmer, Gav Meadows & Paul
Davis. Despite treating this a social event & 'cruising' around the course,
suffering a bad fall & almost getting lost Chris crossed the line in an
impressive 3:41:49 finishing 19th in a field of 222. Gav was next over the line
for GRC in 24th position with a time of 3:47:29. This was his final long run
before tapering for the Barcelona Marathon. After being chased down by Gav for
much of the race, Paul finished in 4:00:25 placing 46th overall. He said 'the
hills after 20 miles really took their toll & slowed me down! I'm still very
happy with my time overall though.'