Paul Jepson and Tracy Webb took part in the inaugual Little Bytham 5k on Sunday 27th May. It’s an off road event taking in the paths and tracks within one of the regions most picturesque organic farms. The course starts beside the stream that winds through the village, takes in a short section of the former Midland and Great Northern Railway then climbs gradually towards the halfway point.

There is then takes a brief detour through the farm itself before rejoining the railway and the gradual descent towards the finish where there is the option of a splash through the stream, which Paul took, or a dash across the bridge before the short climb to the finish line. The total number of runners was 92 which exceeded the organisers expectations. A challenging little race well worth the £5 entry fee which raised funds for the village hall and Brownies. 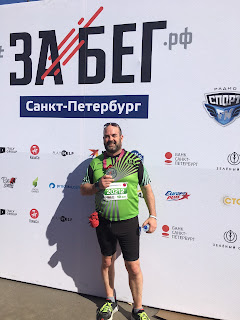 Grantham Running Club member Simon Hartley extended a business trip to St Petersburg, Russia, to take part in a national running festival. Firstly he clocked his first overseas parkrun at Elagin Island in the city on Saturday. At 31 minutes not a fast time, but he said he was slowed down by the views.

On Sunday St Petersburg joined 14 other Russian cities in hosting their second annual event, Zabeg.rf (Race Russia) to compete for the title of “Treadmill of Russia”. Runners could choose from 2k, 5k, 10k or 21k races. Simon opted for the 10k and joined some 4300 runners at the St Petersburg Zenit football stadium for the 9am start on what was an unseasonably warm May morning, with bright blue skies and the temperature already at 22C.

The course was almost entirely flat, save for the twice-crossed 20m high Yakhtenny Bridge over the Nevka River. The route offered stunning far reaching views across the Gulf of Finland, and the gentle sea breeze at this point was the only offering of any relief from the heat of the sun.

The event was very well organised, with a fan zone to entertain the large supporting crowd and the finishers. An estimated 45000 runners took part across the 15 cities and each finisher received a large medal and technical t-shirt specific to their city.

Simon was pleased with his finishing time of 1:06:18 given the conditions and added it was a thrill and a privilege to be able to take part in his first non-UK race.

Having eagerly watched other members complete their marathons over the last few weeks, five members of Grantham Running Club made the trip north to the Scottish capital on Sunday to complete the Edinburgh Marathon with over 8,000 runners taking part.

Starting on Potterrow in the grounds of one of the oldest Universities in the world, this incredible city centre start took the runners through the very heart of Edinburgh. Competitors then ran past the Scottish National Gallery and into Princes Street Gardens, with the iconic Edinburgh Castle as an impressive backdrop. The course took in some of Edinburgh’s most iconic landmarks as well as offering picturesque views along the East Lothian coastline.

Third time marathon runner Andy Atter was first home (in 438th place) for the green and black army with an impressive time of 3:12:58 using his experience in the later stages of the race just missing out on a personal best by less than 45 seconds.

He was closely followed by Joe Clarke who was running his first marathon for the club in a time of 3:13:40, which was over 30 minutes faster than his previous best of 4 years ago. First timer Matthew Atter was not far behind with a time of 3:17:44, which was all the more impressive given a recent knee injury which affected his training and he paced the race almost perfectly.

The other first timer in the group Richard Payne finished in 3:38:57. Another equally impressive time and has put him in the mood for another race over the same distance in the future. Having set a new PB in Manchester only 7 weeks earlier Caroline Davis broke 4 hours again coming home in 3:57:47. 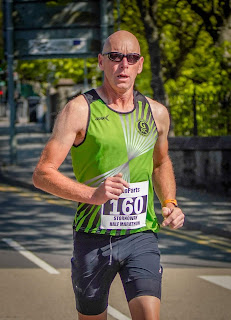 The Outer Hebridean Isle of Lewis was the destination for GRC's Nev Chamberlain to run the Stornoway Half Marathon. The race which was held under cloudless skies started and finished alongside the town's inner harbour and was roughly 50/50 tarmac and trail firstly taking the runners around the town's streets before heading into the beautiful country park surrounding Lew's Castle.

The steepest gradients of the undulating course we're in the second half but at least it also offered some shade which was totally absent for the first 7 miles. Nev's finishing time of 1:49:51 placed him 64th of almost 200 finishers and has set him on his way to complete the Heb3 race series of half marathons held on different Hebridean islands over the coming months.
Posted by GRC at 26.5.18 No comments: 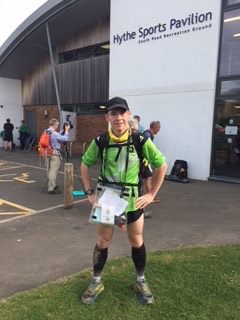 Every year the Long Distance Walkers Association (LDWA) organises a 100 mile event. This year it was called the Cinque Ports Hundred which began in Hastings and finished in Dover. There were checkpoints in towns or villages every few miles serving hot and cold food including pasta, pizza and cooked breakfast, wonderful home-made cakes or other sweet treats.

In keeping with LDWA tradition, the route wasn’t marked – instead each entrant had to follow a set of route instructions, with a map and compass as back-up.    The route had around 7,000 feet of elevation and was a mixture of footpaths, fields, canal path and rocky paths.

Nick Payne started with around 40 other runners at 2pm on Saturday. Around 400, mostly walkers had started at 10am that morning. Nick completed the first 50 miles in around 13 hours, however the thunderstorms in the night, blisters and the hot weather on the Sunday slowed him down. In the end, He was just happy and relieved to finish in 35 hours 43 minutes placing him 86th out of 306 finishers.

Below is a summary of the best & worst of the event as described by Nick.

Good bits:
Meeting many likeminded runners/walkers to share the pain with.
Getting a round of applause from the organisers when I finished.
A “Cinque Ports” certificate and badge as souvenir.
Seeing my wife and daughter at every checkpoint on the Sunday.
The lightening frequently lighting up the night sky on Saturday night.

Not so good bits:
The hot and humid weather with the temperature reaching 25 degrees on both Saturday and Sunday.
The blister inducing downpours at night.
A blister PB of 12 – mainly due to the inclement weather.
The 2,200 steps scattered throughout the route. Many were made out of sharp rock on the rocky coastal paths after 70+ miles – just relieved I made round in 1 piece.
Getting lost on more than one occasion – I ended up completing 112 miles!
Being chased by a herd of cows after around 10 miles – glad this was after 10, not 90 miles as I’d have struggled to run!
Falling over twice in the night – thankfully I emerged muddy but unscathed.

‘I found this tougher than my previous 100, however I did really enjoy it despite all the pain – I must be mad! Doing an event like this is a great challenge – it’s tough but very rewarding - the sense of achievement when I finished was the best feeling running has given me’ Nick said.
Posted by GRC at 26.5.18 No comments: