Three members of Grantham Running Club stormed to success at the West Pinchbeck 10k on Sunday 30 September, tackling the fast, flat course through quiet Lincolnshire country roads to complete the popular race.  Participants started in good race day conditions, but were met with a brisk headwind at the 5km stretch of the course, typical of the Lincolnshire fens, which slowed down the majority of participants.
Joaquim Jeronimo led the GRC contingency home by smashing out a personal best of 40:10 in what has been a remarkable run of PB’s this season for the GRC newcomer, affectionately known as Flash by fellow club members.  Holly Durham was second home for the club bagging a podium place with 3rd prize for the ladies in a time of 44:09, despite running a cautious race on account of a persistent Achilles injury. Paul Jepson maintained recent form to complete the race in a commendable time of 49:57, inching ever closer towards a 70% age grading.
Posted by GRC at 30.9.18 No comments:


On Sunday 30th September a band of 10 merry men and woman from Grantham Running Club joined approximately 9000 runners for Nottingham’s 38th Robin Hood Half Marathon. The course, starting and finishing at Victoria Embankment and taking in various landmarks of Nottingham including the castle and the scenic Wollaton Park, while generally flat features two notable hills at around 3 kilometres and just after halfway to add interest. The city location drew competitors from a wide area and ensured that the event was very well supported by visitors and locals, with plenty of cheers and jelly babies offered to runners along the route. The crisp September morning saw some shivering on the start line but made for a comfortable run.

First home for GRC was Tony Johnson, who ran his fastest of four September half marathons, in a fine 88:19. Running the event for the first time since the 2016 course change, Tony noted the revised opening miles made for a tougher route. Next in was Peter Bonner at 95:42. Peter found the race well organised and the weather perfect, but unfortunately came down with a cold during the week before the race, scuppering plans of a quick time. As he was running to raise money for Barnado's, he was pleased to be able to at least keep his heart rate down and enjoy the run and hopes he will be sufficiently recovered in time for his next half marathon in Peterborough.

Julie Braker was first woman home for the club, finishing first in her age group in a fantastic time of 1:49:23. Almost two minutes faster than her 2017 time for the event, this represents a stunning age grade of 90.53%, just fractionally down on her club record best of 90.69% set at the Leicester Half Marathon in 2017.  Belinda Baker was next GRC woman to finish, running brilliantly to knock just over five minutes of her previous PB, clocking 2:15:51. Rachel Varela was hot on her heels at 2:15:58 and was delighted to have completed her first half marathon, an incredible achievement having joined the club’s beginner group in April. Rachel looks forward to attempting another half in the future.
Tracey Smith was close behind Rachel, coming home in 2:16:11. She was delighted to have gained a big PB, taking more than six minutes off her previous best. Next home was Sylv Hull, who finished her debut half marathon in an excellent 2:18:38. Sylv, a recent addition to the club, thoroughly enjoyed her first half and was pleased with her pacing, running a negative split having commenced her run cautiously. Kate Marshall followed with a personal best of 2:22:43, taking almost four minutes off the time she had achieved several weeks earlier in her half marathon debut at Rutland Water.
Two more runners made their half marathon debuts at the Robin Hood. Kim Ahrens ran not only her first half marathon distance but her first ever race over any distance, finishing in a commendable 2:36:19. Sophie Wingad was delighted to have overcome a knee injury to successfully complete her first half in 2:37:27 and noted that she loved the route and even enjoyed the hills!
Posted by GRC at 30.9.18 No comments:

Chris Toon was the sole Grantham Running Club representative at the second ever Pontefract Half Marathon on Sunday 30th September. The 2017 edition was Chris’ first ever half marathon as a novice runner having completed that year’s GRC 10 weeks to 10K course. Having loved the course, so much – the beautiful South Yorkshire countryside tempering the toughness of the very undulating terrain – Chris returned to see how much he could improve on the 2 hrs 11 minutes he clocked last year.

With an early 8:30am start and a fairly long journey from Grantham up the A1, there was no time for a warm up. With this in mind Chris took it easy for the first few miles, taking his time to reach his target race pace. Enjoying favourable conditions for racing – cool, cloudy, and with only a slight breeze, Chris picked up the pace through to ten miles and was running well.

Fearing he may have overcooked his effort having only recently returned from a calf injury and with the final three miles back to Pontefract all uphill, it was the lure of a good time and the fantastic encouragement of the spectators that spurred Chris on to the finish. He crossed the finish line in 1:46:54, bettering his previous best half marathon time by nearly two minutes. Chris hopes he can take this good form into his upcoming races at Kielder and Peterborough.
Posted by GRC at 30.9.18 No comments:

Brothers Sam and Jack Dodwell represented Grantham Running Club at the 36th Windsor Half Marathon, which took place on Sunday 30th September. One of the country’s longest established races, the event is held in the iconic Windsor Great Park. The constantly undulating course features only one troubling hill near the end of the race and has one of the longest and most visually stunning finishing straights in road racing along The Long Walk with Windsor Castle in full view beyond the finish line.
It was Sam’s first attempt at a half marathon although, somewhat unusually, he has previously completed the London Marathon. He finished in a highly respectable 1:54:32, finding the scenic course a pleasure to run around.
Jack was eager to better his previous half marathon best of 1:38:36, set at the Rock and Roll Liverpool Half Marathon back in May. The hard work he has put in to his recent training paid dividends as he crossed the finish line with a near two minute PB of 1:36:49. After the race the brothers paid tribute to the great crowd support, who were cheering on members of Grantham Running Club from as far away as the outskirts of London.
Posted by GRC at 30.9.18 No comments:

Grantham Running Club's Mark Edwards set a new PB at the Hull Marathon slicing over 23 minutes off the mark set in London earlier this year to finish in 4:37:07
Posted by GRC at 23.9.18 No comments: 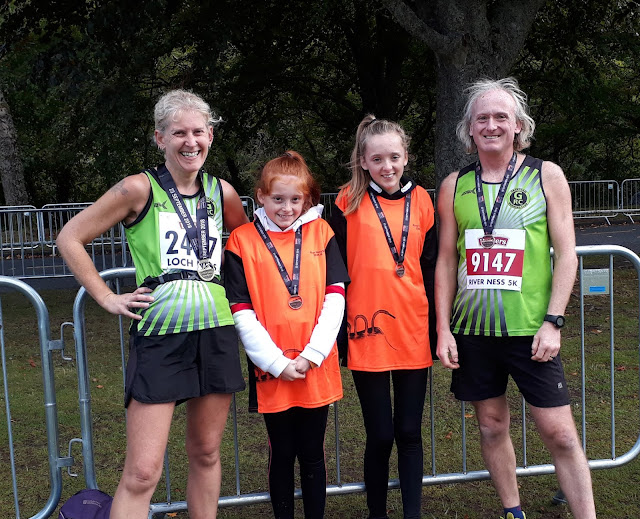 Caroline Davis and her family made the long, long journey from Grantham to the capital of the Scottish Highlands to compete in the 2018 Loch Ness Half Marathon – part of the Inverness Festival of Running – on Sunday 23rd September.
It was an early rise out of bed for Caroline as the entrants to the marathon travelled by bus to the start line at Fort Augustus near Loch Ness. The runners assembled for the 10am start with cloud swirling around and began the race to the sound of a pipe band.
The course is mainly a gradual descent back down to Inverness but with a couple of climbs and many undulations to contend with. Running alongside Loch Ness for the first few miles, the scenic route was accompanied by spells of beautiful Highland sunshine. There were though, of course, some heavy showers blowing through to keep things varied.
Cheered on by the many enthusiastic volunteers on the course Caroline felt that a comfortable sub-four hour race was on the cards. Unfortunately, at around the 15 mile mark knee trouble forced a slowing of her pace.
After some tough miles in the later stages Caroline finally entered Inverness and joined the banks of the river Ness to run the last couple of crowd lined miles. The finish in Bught Park was, as ever, a very welcome sight, made sweeter with Caroline managing to break four hours, finishing in 3:58:59.
Later in the finishers marquee Caroline commented: "When my knee started giving me problems at mile 15, walking was never an option. I knew I had to grit my teeth and keep powering on as we all had to get back home for work and school! The complimentary post race meal and live band was a great way to round off another successful marathon."

Whilst Caroline was tacking the 26.2 mile marathon, the rest of the family - Paul, Isobel and Abigail, took part in the very family oriented River Ness 5k. The 'race' took in both banks of the river, starting and finishing in Bught Park. Although untimed, the youthful field set a fast and furious pace fully deserving the medal, t-shirt and goody bag awaiting them at the finish.
Posted by GRC at 23.9.18 No comments: