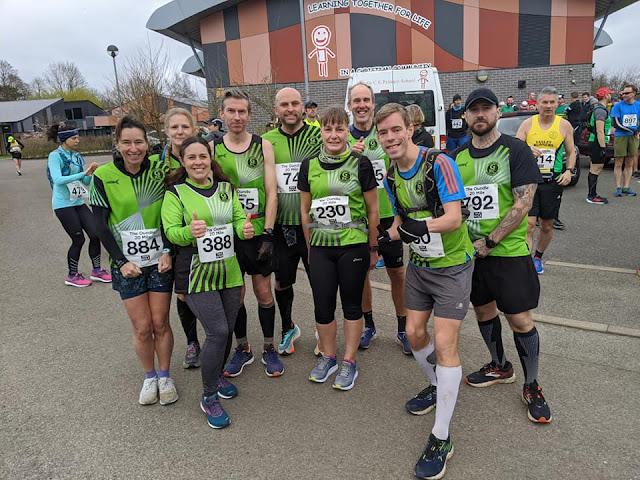 With the cancellation of so many races both locally and nationally in the 48 hours prior to the start of the third Oundle 20 on Sunday 15th March there was a weird atmosphere amongst the runners that stood on the start line. A number of runners were just wanting to enjoy what they (rightly) felt was to be their last organised race for a number of months given how the pandemic had developed in other countries like Italy. A few others were grateful that the spring marathons they had entered were no longer happening as their training had been less than ideal and it meant they could run the challenging undulating course without any pressure of having to run a certain pace.
It is fair to say that these thoughts were on the minds of a number of the Grantham Running Club members taking part as the race started. Featuring very little flat sections but no significant climbs instead containing rather long gradual uphills that went on for several miles. Particularly the four miles between Wansford and King’s Cliffe which runners would take on around the halfway point into the race.

First in for GRC a week after his excellent run at the Cambridge Half Marathon was Jonny Palmer. Taking part in his first 20 mile race, he set off with the leading pack in sight and ran as high as third. Finishing fourth in 1:56:49, just over a minute and a half behind the race winner Phil Martin of Peterborough and Nene
Valley AC, Jonny set the tone for some great performances and personal bests, which were all the more remarkable when the weather turned about an hour into the race with driving wind and rain right into the faces of the runners.

Next in for the club was Chris Limmer - one of the few from the club to neither PB or run their first 20 mile race. Starting towards the back of the field Chris Limmer chose to run his way though the field and see what would happen. Keen to enjoy the last race for a while he crossed the line in 2:11:45.

FIrst of the GRC PB runners was Dean Riggall who finished 31st and in doing so beat his previous 20 mile best by seven and a half minutes with 2:20:16. Next was Darren Harley who, on his 20 mile race debut, hung on to finish just five minutes behind Dean in a fine 2:25:30.
Still nursing a minor injury niggle in the build up Sarah Chenowyth gave the race a controlled effort and to clock 2:39:31, finishing 20th female and 114th overall. The women’s race was won by Sophie Darling of
Lincoln Wellington AC in a new course record 2:13:22. Warren Stark was next in and he smashed his previous PB from last year’s Oundle 20 by an amazing nineteen minutes with 2:50:49

Caroline Davis was another to set a PB crossing the line in 2:52:25, shaving 31 seconds off from her year old previous best set at Ashby. Four minutes later in 2:56:25 was Women’s Captain Sarah High who remarkably managed to equal to the second her PB set back in 2016.
GRC had six participants who had entered the race as part of their training for their first ever marathon and were taking part in their longest race to date. This included Dale Towning (3:09:45) who was followed by Rachel Varela (3:22:00), who had marathon experience having completed the Rutland multi terrain marathon in September 2019. Claire Martin (3:41:26) led home four runners who were rarely out of sight of each other. CJ Walker (3:49:10) was full of praise for her club mate Belinder Baker (3:48:35) for supporting her and she was delighted to break four hours.  Kate Marshall (3:48:26) and Tracy Webb (3:55:20) both enjoyed their first runs at Oundle too even if Kate then felt a sharp pain in her thigh attempting to stretch afterwards!

With all races postponed or cancelled for the foreseeable future Kate and the rest of the runners have plenty of time to recuperate and hopefully be fit and able to enjoy the pleasures of running while the world battles more pressing matters.
Posted by GRC at 15.3.20 No comments: 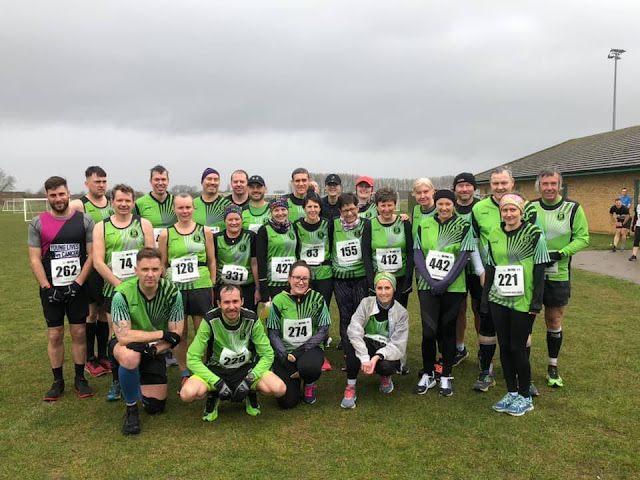 
On Sunday 8th March ten members of Grantham Running Club joined over 11,000 other runners for the 2020 Cambridge Half Marathon. Starting on Midsummer Common before weaving through the historic streets of the city, the course then sent runners out towards the villages of Granchester and Trumpington before finally giving runners a fast final few miles downhill back to the city and to the finish back on Midsummer Common.

First in for GRC and smashing both his PB and the previous club record by nearly four minutes with a superb 1:11:35 was Jonny Palmer. Currently in the form of his life he will sadly not have the opportunity to target a sub-2:30 clocking at the London Marathon in April, but hopefully can use all the miles banked in training to good effect when racing presumably resumes over other distances in the summer.

Finishing nearly ten minutes later was Chris Limmer. Having nursed a niggle in his shin in the days before the race he took it relatively easy in the twisty and narrow first four miles. He soon got in to his stride though as the route left the city centre and spent a majority of the race overtaking people and was not unhappy with his 1:21:01 clocking.

Gav Meadows showed a welcome return to form after running a well paced race to finish less than two minutes outside his PB with 1:29:46 – his fastest half marathon time since 2017.  Sarah Chynoweth finished exactly a minute later (1:30:46) after slowing in the final stages and was disappointed to not break ninety minutes but should be rightly pleased with another age graded performance above 70%.
Clocking 1:40:40, Craig Drury shaved seven seconds off his eighteen month old PB. Despite the congestion on the course, he was full of praise for the support and atmosphere of the event. Returning too from Cambridge with a PB was Harriet Siebenaller, who took a whopping ten minutes off her half marathon PB, clocking 1:40:01.

Claudette Joint also claimed a personal best by three minutes and was rightly delighted with 1:53:31. Vicki Ball was equally pleased finishing her first half marathon since joining the club nearly two years ago in a time of 2:02:58.

Sandwiched between Vicki and Claudette were Katie Bland and Neil Emerson. Katie ran her thirteenth half marathon in as many months as part of her marathon training and only three minutes outside her PB with 1:55:43; Neil ran his quickest half marathon since 2018 with 1:55:05.

The race winners were both from the local club Cambridge and Coleridge with Victoria Knight winning the women’s race in 1:14:45 and Jonathan Escalante-Phillips winning overall in 1:05:36.